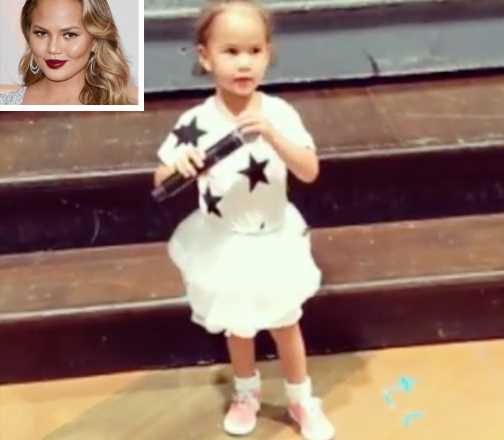 Chrissy Teigen and John Legend’s 3-year-old daughter made her Saturday Night Live debut — even though the cute moment didn’t make it on-air.

Ahead of her father’s performance, for which the musician performed a special tribute to late rapper Nipsey Hussle, Teigen, 33, shared a series of adorable videos of her baby girl having her big moment on the SNL stage.

Walking down the steps with a big smile on her face, Luna gets handed a microphone as a voice from behind the camera calls out, “Say, ‘Live from New York, it’s Saturday Night.’ “

“Live from New York,” Luna says, stopping mid-phrase, before being helpfully prompted with the words to finish the phrase, causing her proud papa to laugh.

As befitting her big moment, Luna was dressed to impress, wearing a star-patterned shirt with a white tutu skirt.

“An emotional moment for me. My baby doing the dream,” Teigen captioned the photo, to which her husband replied, “My baby.”

David Spade, who rose to prominence as a cast member of the show and has gone on to host the program, went on to point out that their daughter had already accomplished something many comedians never get the opportunity to do — including himself.

“I never got to say live from new york. And she does!” he quipped in the comments section. “How the f—? I’m starting a petition,” Teigen responded.

Although Luna didn’t quite manage to work through the entire phrase on her first go-around, she did eventually get the hang of it!

Teigen went on to share another cute clip of her daughter getting through the entire line from start to finish — and then celebrating by twirling for her adoring audience.

With a big smile on her face, Luna went on to hand off the mic to her parents, who seemed overjoyed about her performance.

Of course, this hasn’t been Luna’s only time in the spotlight this month!

Two weeks ago, Legend, who’s one of the hosts of The Voice this season, shared an adorable photo of his baby girl hard at work helping him judge the upcoming performances.

“Luna carefully scrutinizing tonight’s performances,” the “All of Me” singer captioned the photo of Luna sitting on his lap, ardently looking at the stage with a pair of headphones on.

With two parents in show business, Luna spends plenty of time on set, and in a recent interview with PEOPLE, Teigen spoke about the family-friendly atmosphere at each of their NBC shows.

“We work a lot, we’re on set a lot. Luckily, our jobs are the kind of place where you can bring your kids and have this life still,” she said. “John and I work on the same lot so we get to see each other a lot. I walk over to The Voice, he’ll walk over to Bring The Funny, and I have a little daycare that they’ve set up for me.”

“Kelly Clarkson has the most wonderful children and her daughter River is like a caretaker. Luna had just met her and it was automatic, it was just so adorable,” she said of her daughter’s friendship with River.

“And it’s a testament to Kelly because Kelly is so normal and cool … and an amazing, amazing mother,” Teigen added. “I just see [Kelly] reflected in her kids and they’re so wonderful.”