Home » Family Health » Her Daughter's Health Scare Inspired this Mom of 3 to Become a Startup CEO: 'I Hope I've Taught My Kids to Never Give Up' 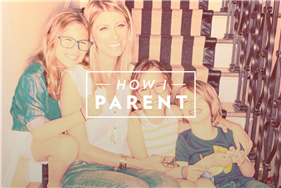 Her Daughter's Health Scare Inspired this Mom of 3 to Become a Startup CEO: 'I Hope I've Taught My Kids to Never Give Up'

Name: Heidi Hertel
Location: Los Angeles, California
Occupation: Founder and CEO of Fitz Frames
Family situation: I am mother to 3 kids, ages 5, 8 and 9. Building a company requires me to work start-up hours, which can hit up to 80 hours a week. My busy schedule would not be possible without the support of my husband and our nanny, who helps us daily.
Parenting “philosophy” in a sentence: It’s important to love your kids for who they are, not who you expect them to be.

What was your journey to having the family life you have today?
I come from a big family of four, so after my husband and I got married in 2008, having kids felt like a natural next step. Once my oldest daughter was born, I made sure to prioritize her health by regularly taking her to the pediatrician and dentist, but I was really surprised when I found out I had been late to taking her to the eye doctor. My daughter’s preschool teacher was the first to suggest that I take my then-three-year-old to get examined because she noticed there was an issue with one of her eyes.

Her teacher, God bless her, was amazing. She said that the kids had been doing a group activity when she noticed something was off. The entire class was supposed to look up towards the ceiling when she saw that one of my daughter’s eyes had moved a little slower than the other. The moment she told me what she had discovered was very humbling for me, as a parent. I immediately felt guilty for not catching this issue. I made an eye doctor appointment right away and was told that my daughter needed glasses because she had a pretty serious eye condition called Strabismus, and if it was not caught before the age of eight, it can be irreversible. At that point, I took our younger daughter, who was two years old at the time, and we were told that she would probably need glasses as well.

Through this experience, I realized kids can’t always communicate what their issues are. I’ve read a lot and heard from doctors, teachers and parents who have said that kids can be misdiagnosed with all types of things, like behavioral or learning disorders, just because they can’t see. But buying glasses for kids had so many challenges. The frustration I felt inspired me to launch my own company, Fitz Frames, to help solve for issues like fit, high prices and the concern that they might break easily.

How has it felt launching your own business while being a mom of three?
It’s an overwhelming feeling to see something that was just an idea come to fruition after years of hard work and of really pursuing something that I wasn’t sure would actually happen. Although it was hard spending some time away from my kids, I was really fortunate that my husband stepped in for our family so that I could pursue this dream.

How did your upbringing influence your parenting style?
I was very lucky to have a stay-at-home mom who did an amazing job of running a household of four children with virtually no help. My dad was really hands-on, and was an inspiration to me professionally. He worked in politics and I always admired him for that. They both showed me how to be a really kind and mindful parent.

With my kids, I try to share my own experiences to help them get through difficult situations. Whether it’s first-day-of-school nerves or they’re facing conflict with a friend, I’ll share a similar story of what happened to me as a kid to let them know that I’ve been in their shoes before. This helps them feel reassured that their situation will eventually be resolved. I truly believe that demonstrating empathy and allowing your child to express their emotions is critical.

What’s your favorite thing about parenting?
My favorite thing is spending time with my kids. They’re my favorite people and I’ve been amazed at how much they’ve grown. Their personalities were kind of established as soon as they entered this world and have pretty much remained the same. The time I spent with them when I was a stay-at-home mom was really, really special and this time, sharing what I’ve been working on for so long has also been amazing. I hope that I’ve taught them to never give up and that hard work pays off, but that they’ve always been the most important people in my life.

What’s the best advice you can share with new parents?
Do your best and remember that everything is temporary.

What would you want your kids to say about you as a parent?
I want my children to know that they can come to me anytime and for anything. I hope to inspire them to go for their dreams and to show them that hard work is the key to anything worth doing.