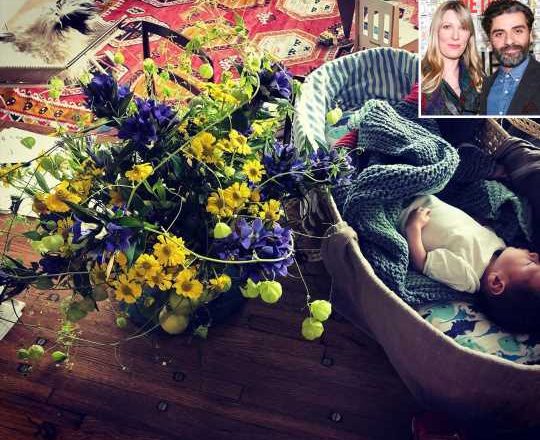 Oscar Isaac is a father of two!

The Star Wars: The Rise of Skywalker actor and his wife, filmmaker Elvira Lind, have welcomed their second child, a son, his rep confirms to PEOPLE.

Lind also shared the happy news on Instagram Thursday alongside an image of the couple’s newborn in a bassinet, flanked by a pretty floral arrangement.

Who’s Due Next? Blake, Keira, Anne and More Celebs Who Are Expecting

Lind, a filmmaker, has been sharing updates on her social media throughout her pregnancy with many selfies chronicling her growing bump and appointments with Isaac.

“Last weeks count down to #2kidschaos,” the new mother of two previously posted on Instagram, along with a photo showing off her bump under a green tank top.

In February 2018, Isaac revealed he and Lind had wed a month before the arrival of their first child. Eugene was named in honor of Isaac’s mother, whose middle name was Eugenia. (She died two months before the birth.)

“[Elvira]’s Danish — she’s not a citizen, and she was very pregnant and there was an element of figuring out, ‘Well, where are we going to be?’ And us wanting to be a family unit a bit more,” he explained to GQ Style of their marriage-timing decision.

“But, you know, at the time, right before it happened, my mom was ill, and so I saw [Elvira] carrying my child, bathing my sick mom — seeing her do that, I just thought, ‘I want to be with this person forever and ever,’ ” continued The Addams Family voice actor.

“I just wanted to take that extra step as well. And so my mom passed in February and we got married in March and our son was born in April. It was a wild year,” Isaac added. “I think I’ll be processing it for the rest of my life.”

“There’s a little bit of an untethered feeling since then. A lot of stuff that I felt I knew and had direction about now just feels a little bit disconnected and floating around.”