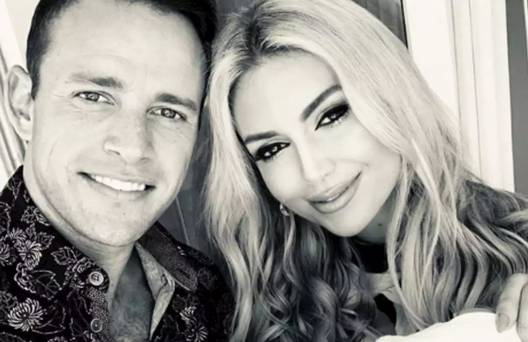 Rosanna Davison plans to put pen to paper about her surrogacy journey to help alleviate the stigma surrounding the procedure.

The former Miss World (35) was inundated with messages of support after revealing last July how she and husband Wes Quirke were due their first baby in November, following several heartbreaking miscarriages.

Having previously written two best-selling books about her vegan lifestyle, Rosanna revealed she would love to chronicle her journey to becoming a parent.

The couple are expecting a little girl this winter. “I’d definitely consider writing a book as there’s so much I haven’t discussed about [the] process, from the emotional side of the journey to the complex medical and legal requirements,” Rosanna said.

“It’s not a particularly straightforward route, although it’s one that we are extremely grateful for. “We just feel strongly that silence drives stigma, while speaking about it helps to normalise it. It gives hope to others and is the best way to heal after the trauma of a pregnancy loss.”

Rosanna said she could also see herself doing a TV documentary as she delves into the whole issue of surrogacy for Irish families.

“Rather than just discussing our journey, I’d love to do a documentary following different people on their road to parenthood through surrogacy,” she said.

“Once we’re through the wonderful chaos of the newborn stage, I might start looking at ideas next year.”

There is currently no legislation surrounding surrogacy in this country and it is still prohibitively expensive, starting at €30,000 and going up to €150,000.

Rosanna and her husband of five years opted to go down the gestational surrogacy route and said they were “overjoyed” to share their happy news in a social media post last summer.

Since then, the lifestyle guru has received countless messages of support from other people in a similar situation, who have also suffered the pain of miscarriages.

Although tests showed she had excellent fertility, Rosanna was unfortunately not able to sustain any of her pregnancies.

They were advised that gestational surrogacy abroad was their only viable option for a biological child and they were “incredibly grateful” to the team of medical experts who helped them achieve their dream.

“We already love her so much and can’t wait to finally hold her,” she said.

Read more: Spotlight on surrogacy: the birth of an industry