A manifesto urging reliance on “herd immunity” without lockdowns was warmly received by administration officials. But the strategy cannot stem the pandemic, many experts say. 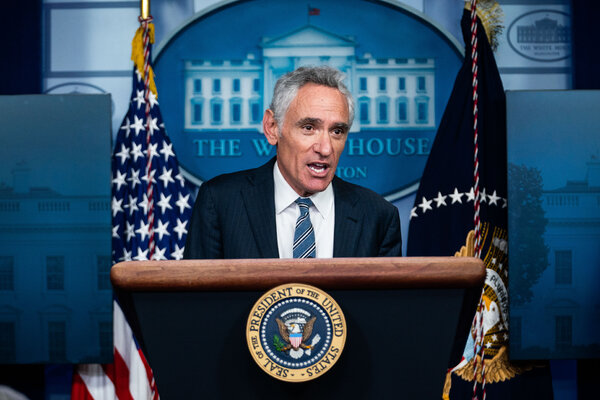 Now Dr. Atlas is President Trump’s science adviser, a powerful force inside the White House. And Dr. Bhattacharya is one of three authors of the so-called Great Barrington Declaration, a scientific treatise that calls for allowing the coronavirus to spread naturally in order to achieve herd immunity — the point at which enough people have been infected to stall transmission of the pathogen in the community.

While Dr. Atlas and administration officials have denied advocating this approach, they have praised the ideas in the declaration. The message is aligned with Mr. Trump’s vocal opposition on the campaign trail to lockdowns, even as the country grapples with renewed surges of the virus.

The central proposition, supported by some 40,000 signatories, is that to contain the coronavirus, people “who are not vulnerable should immediately be allowed to resume life as normal” while those at high risk are protected from infection.

Younger Americans should return to workplaces, schools, shops and restaurants, while older Americans would remain cloistered from the virus as it spreads, receiving such services as grocery deliveries and medical care.

Eventually so many younger Americans will have been exposed, and presumably will have developed some immunity, that the virus will not be able to maintain its hold on the communities, the declaration contends.

But it does not offer details on how the strategy would work in practice. Dr. Anthony Fauci, the government’s top infectious disease expert, has dismissed the declaration as unscientific, dangerous and “total nonsense.” Others have called it unethical, particularly for multigenerational families and communities of color.

Alarmed and angry, 80 experts on Wednesday published a manifesto of their own, the John Snow Memorandum (named after a legendary epidemiologist), saying that the declaration’s approach would endanger Americans who have underlying conditions that put them at high risk from severe Covid-19 — at least one-third of U.S. citizens, by most estimates — and result in perhaps a half-million deaths.

“I think it’s wrong, I think it’s unsafe, I think it invites people to act in ways that have the potential to do an enormous amount of harm,” said Dr. Rochelle Walensky, an infectious disease expert at Harvard University and one of the signatories to the Snow memo. “You don’t roll out disease — you roll out vaccination.”

The declaration grew out of a gathering hosted in Great Barrington, Mass., by the American Institute for Economic Research, a think tank dedicated to free-market principles that partners with the Charles Koch Institute, founded by the billionaire industrialist to provide support to libertarian-leaning causes and organizations.

On Oct. 5, the day after the declaration was made public, the three authors — Dr. Bhattacharya, Sunetra Gupta of Oxford University and Martin Kulldorff of Harvard — arrived in Washington at the invitation of Dr. Atlas to present their plan to a small but powerful audience: the health and human services secretary, Alex M. Azar II.

Over the course of an hourlong meeting in a wood-paneled, sixth-floor suite atop the health department’s headquarters, the researchers walked the secretary and Dr. Atlas through their thinking.

Dr. Azar later tweeted: “We heard strong reinforcement of the Trump Administration’s strategy of aggressively protecting the vulnerable while opening schools and the workplace.” 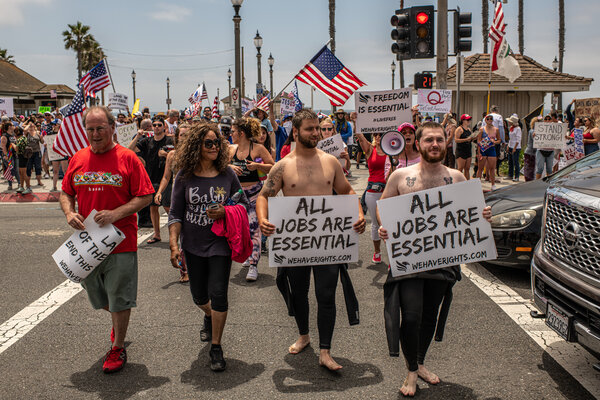 Battered by lost jobs, pandemic fatigue and isolation, and worried for their children, there is little doubt that Americans loathe lockdowns, although many still see them as necessary to control the virus.

Among scientists, too, there is near-universal agreement that lockdowns are harmful. Even Dr. Fauci has suggested that another national lockdown must be instituted only as a last resort.

But mostly, scientific disagreement centers on whether lockdowns are a necessary move when other strategies to contain the virus have not even been put in place, or have failed.

“This has been wrongly framed as a debate between lockdown and no lockdown,” said Dr. Deepti Gurdasani, a clinical epidemiologist at Queen Mary University of London.

Dr. David Nabarro, a special envoy to the World Health Organization, has urged governments not to resort to lockdowns as the primary method to control the virus. Masks, social distancing, fewer crowds, testing and tracing — these are the ways to control the virus in the long run, he said in an interview.

But the lockdowns in the spring were necessary, he added, as emergency measures to give countries time to put in place strategies to control the virus.

“There is a middle way,” Dr. Nabarro added, between strict lockdowns and letting the virus freely infect people. “If only we had a few more world leaders who would understand this, we wouldn’t have this debate going on.”

But Dr. Bhattacharya and his supporters go further. They say that governments should never have imposed lockdowns at all, and never should have tried to institute coronavirus testing and contact-tracing.

The manifesto’s central tenet is that young people should be free to resume normal life — to re-enter the work force, attend college, dine in restaurants. They would become infected, hopefully without much illness, and gain immunity.

Eventually the virus would not be able to find new victims and would fade away.

“People who are more at risk may participate if they wish, while society as a whole enjoys the protection conferred upon the vulnerable by those who have built up herd immunity,” the declaration said.

The strategy includes keeping older people cloistered, with regular testing to detect possible outbreaks in nursing homes, and with groceries and other necessities delivered to anyone over 60 sheltering at home. Alternately, older people might move to other facilities for isolation or quarantine.

There would be no widespread surveillance for the coronavirus. People would be given information about testing, with an emphasis on those who have symptoms — but when and how to get tested, and whether to isolate if infected, would be left up to individuals.

“Testing and isolating indiscriminately causes too much collateral damage for it to be useful,” Dr. Bhattacharya said.

‘How’s this supposed to go?’

But some experts said the strategy was highly impractical, given the difficulty in determining who is truly susceptible. The risk of death from Covid-19 rises sharply with age, but about 37 percent of adults in America also are at significant risk because of obesity, diabetes or other underlying conditions.

The most recent statistics indicate that 20 percent of deaths from Covid-19 occur in people under age 65. And about a third of people who have recovered from the disease, including the young, still struggle with symptoms weeks later (a phenomenon the Barrington authors contest). “It’s amazingly irresponsible” not to take these risks into account, Dr. Nabarro said.

The declaration’s strategy is both unethical and fails to account for human behavior, said Ruth Faden, a bioethicist at Johns Hopkins University.

Many high-risk groups — people who live in multigenerational families or in crowded living situations, or who have diabetes and obesity — are disproportionately found in poor communities, she said. The declaration’s strategy would require them to move away from their families or to risk having younger family members bring the virus home.

Reopening schools when community levels of the virus are high similarly rests on a misguided assumption that parents and teachers would agree to the strategy, she added.

Scientists who have signed the declaration did not offer many details for putting its ideas in place.

“I don’t know exactly how it would work,” said Gabriela Gomes, a mathematical modeler at the University of Strathclyde in Britain and one of 42 co-signers.

Another supporter, Paul McKeigue, a genetic epidemiologist at the University of Edinburgh in Scotland, said, “Specific control measures for preventing coronavirus transmission are not my area of expertise.”

The lack of a clear plan has turned away even some would-be supporters. Dr. Stefan Baral, an epidemiologist at the Johns Hopkins Bloomberg School of Public Health, attended part of the Great Barrington, Mass., meeting and said he was sympathetic to the effort.

But Dr. Baral, a Swedish citizen who supports that country’s approach, said he did not sign the declaration because it did not lay out a plan for workplace or housing accommodations for people at risk.

Sweden adopted an unrestrictive approach, offering guidelines to its citizens but leaving compliance up to them. The country is often cited as the model for controlling the virus without restrictions, but has among the highest death rates in the world, particularly among the elderly. It has also suffered economic losses comparable to those of other Nordic countries.

It’s possible to avoid even those risks without lockdowns if governments impose some reasonable restrictions like physical distancing and universal masks and install test and trace strategies, Dr. Nabarro said.

“I will contest anybody who says it is undoable,” he added. “It’s doable without collateral damage if you bring together all the local communities.”

The town of Great Barrington, Mass., home to the American Institute for Economic Research, recently distanced itself from the declaration, saying the strategy it proposed could “cost millions of lives.”

“Anyone who might avoid Great Barrington, due to confusion over the Declaration, is invited to visit and see how COVID-safe works in a small New England town,” the town’s leaders wrote.