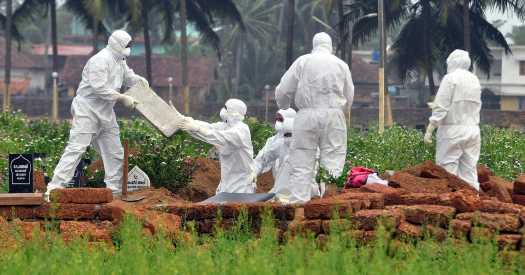 An Experimental Ebola Cure May Also Protect Against Nipah Virus

An experimental drug has protected monkeys against infection with Nipah virus, a lethal disease and emerging pandemic threat for which there is no approved vaccine or cure, scientists reported on Wednesday.

The antiviral drug, remdesivir, is also being tested against the Ebola virus in the outbreak now underway in the Democratic Republic of Congo.

The only current treatment for Nipah virus infection is a monoclonal antibody that is still experimental; it was tested during an outbreak in India last year.

In the new trial, eight African green monkeys were given lethal doses of Nipah virus. Half of them later got intravenous remdesivir. All four monkeys that got the drug survived; the four that did not died within eight days.

If the drug wins approval for use against Nipah, “it will give us an extra treatment that could be used relatively quickly,” said Emmie de Wit, a virologist at the National Institute of Allergy and Infectious Diseases and one of the study’s lead authors. “The average person who reaches a hospital dies within two days, so it’s hard to protect them once they’re infected.”

Ebola and Nipah belong to different viral families, but remdesivir — made by Gilead Sciences and also known as GS-5734 — appears effective against both.

In mice or cells cultivated in the laboratory, the drug has also shown some effectiveness against two other pandemic threats: Lassa fever and MERS coronavirus. It is also effective against respiratory syncytial virus, which infects children all over the world.

Although the outer shells of all these viruses are very different, their polymerases — the genome-copying enzyme that remdesivir targets — are similar, Dr. de Wit explained.

The new study, done jointly by the N.I.A.I.D. and the Centers for Disease Control and Prevention, was published in Science Translational Medicine.

Nipah virus, which causes encephalitis and pneumonia, is lethal in about 70 percent of cases. It can be caught from animals or transmitted between people.

Like Ebola, the virus normally circulates in bats. It was first identified in Malaysia in 1999, when it killed dozens of hog farmers and slaughterhouse workers.

They picked it up from pigs, raised beneath trees containing bat colonies, that had apparently been infected by eating fruit bats had gnawed or defecated on.

In 2001, a lethal outbreak in Bangladesh, among people who drank raw date palm sap, was directly linked to fruit bats.

Infrared photography showed bats clambering into the clay pots that had been tied to trees to collect the sap, then drooling and urinating in them.

In 2017, when donors and vaccine companies formed a $500 million partnership to invent vaccines against three diseases with pandemic potential, Nipah was one of their top priorities. (The other two were Lassa and MERS.)

In the trial, the four monkeys that survived were given their first remdesivir dose 24 hours after they were infected, and a daily infusion for 12 days after that. Two developed mild breathing problems that cleared up within three weeks, while the other two had no symptoms.

The next step, Dr. de Wit said, will be to test how long after infection the drug can be given and still cure the animals.

In 2015, scientists announced that an experimental Nipah vaccine had protected three monkeys against the virus.