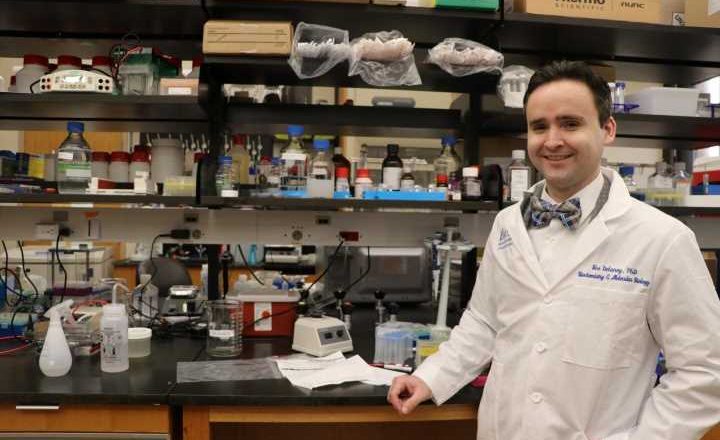 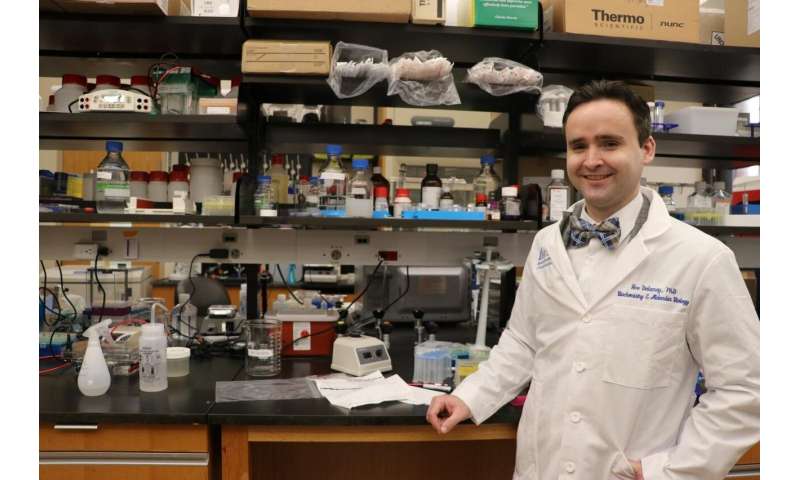 Shedding light on a decades-old controversy, scientists at the Medical University of South Carolina (MUSC) and University of California at San Diego (UCSD) published findings in PLOS Genetics this month showing that autophagy or “self-eating” genes work against tumors in certain types of ovarian cancer.

Autophagy is a cellular recycling pathway that scientists believe plays a role in cancer resistance to stresses such as chemotherapy. The scientists found that autophagy genes also act to prevent tumor formation. This finding, validated in mice, helps to resolve a decades-old controversy based mostly on cells grown in plastic dishes, said Joe Delaney, Ph.D., a researcher at Hollings Cancer Center, who was the MUSC faculty lead on the study. Delaney teamed up with colleague Dwayne Stupack, Ph.D., in the division of gynecologic oncology at UCSD.

Delaney, who uses bioinformatic studies and wet-lab research, studies how aneuploidy contributes to disease, particularly in ovarian cancer. Aneuploidy is the presence of an abnormal number of chromosomes in a cell, which leads to diseases like cancer or conditions like Down syndrome. High-grade serous carcinoma is the most malignant form of ovarian cancer and accounts for up to 70% of all ovarian cancer cases.

The research centered on two autophagy genes: BECN1 and LC3B. Every person has two copies of these genes: one coming from each of their parents. One copy of BECN1 is lost in one of four breast cancers and three of five serous ovarian cancers. This is unusually frequent for a tumor- suppressor gene. BECN1 has been controversial, since it is rarely mutated, and even when it is lost, it is often lost with its neighbor, BRCA1. Some scientists believe that BECN1 deletion is a coincidental event, Delaney said.

However, previous studies in cell culture hinted at tumor-initiating characteristics when BECN1 was suppressed, prompting the current study.

Stupack said, “There were strong messages regarding the role of BECN1 in ovarian cancer that hinted that the situation was more complicated. We were working then with a mouse model of ovarian cancer that we could modify at the genetic level. It was time to put the question to rest and measure for tumor suppression directly.”

Delaney and Stupack performed the same partial deletion found in patients, one of two BECN1 alleles in mammals, in this mouse model. Delaney said the results were immediate and conclusive. The very first BECN1-suppressed mouse enrolled in the study had a sizeable tumor at 3 months of age. “Tumors with the model would not normally form until 4 to 6 months. We knew we had discovered something right away,” he said.

Years of research then went into the investigation of why BECN1 single-allele deletion acted as a tumor suppressor. Using the mouse tumors and human ovarian cancer cells within the lab, the team of 15 researchers tested multiple phenotypes to determine why autophagy gene deletion leads to cancer.

The authors suspected cellular metabolism to be one of the strongest effects following the disruption of this recycling pathway. Ultra-performance liquid chromatography mass-spectrometry metabolomics were performed on human ovarian cancer cells with reduced autophagy genes. Surprisingly, little metabolism was changed. Instead, ovarian cancer cells seemed to delete BECN1 to increase the tumor’s ability to evolve.

“Cancer has always been hard to fight because of its ability to evolve in response to treatment. It was clear that removing these genes increased the rate of genetic evolution. Worse yet, many of these changes were random, allowing for the cancer to potentially evolve many different types of resistance,” Delaney said.

While this tumor-suppressor role of autophagy genes is frightening, given how many patients have lost an allele of either autophagy gene, the tumor’s reliance on low autophagy may actually enable the next generation of treatment for ovarian cancer, he said.

Stupack agreed. “We knew for a long time that autophagy was very different in ovarian cancer. Normal cells in the fallopian tube and on the ovary express high levels of autophagy proteins. Yet dozens of autophagy genes are found to be deleted in a single tumor. This lack of expression helps the tumor form but may also create a weakness for new drugs to target,” Stupack said.

“Before this tumor-suppression study, we had already shown that further clogging the cells’ recycling system killed more advanced forms of serous ovarian cancer. Now we understand why the tumors would have this vulnerability in the first place.”

In their prior study, the authors found that autophagy drugs killed the most difficult form of ovarian cancer. The authors used tumor cells from a cancer patient that were grown in mice.

“Chloroquine, which targets autophagy, has been tried in cancer trials. Ironically, it was used in tumors with very high autophagy levels, the exact opposite of ovarian cancer. We think that, in combination with other autophagy disruptors, chloroquine may have its best effect in a serous ovarian cancer trial because these cells are already compromised. This has yet to be attempted,” Delaney said.

Delaney and Stupack both added that the PLOS Genetics publication provides further rationale for why autophagy-targeting drugs should be tested in clinical trials. Nonprofit donors looking for new cures were essential to the completion of the autophagy studies, including Nine Girls Ask. Future studies to test preclinical models of these autophagy drugs will be funded in part by the Sheryl Prisby Research Scholarship and funds generated through the bike ride and fundraiser LOWVELO at Hollings Cancer Center.

Given that multiple autophagy gene losses are present in nine of 10 serous ovarian cancer patients, Delaney said he hopes to see more research funded. Ovarian cancer ranks fifth in cancer deaths among women, accounting for more deaths than any other cancer of the female reproductive system.