‘Don’t come back and don’t bring any friends!’ Cancer patient waves goodbye to his brain tumour after undergoing pioneering surgery while AWAKE

A cancer patient waved goodbye to his brain tumour after surgeons showed him the mass while he was still lying on the operating table.

James Hinnigan, 39, made the unusual request to see his tumour after undergoing pioneering surgery while he was still conscious.

A video shows the father-of-two, of Wigan, Greater Manchester, waving goodbye to the tumour and telling it ‘don’t come back and don’t bring any friends’.

Mr Hinnigan, who was living in Western Australia when he was diagnosed with stage two glioma in 2015, returned to the UK to take part in a clinical trial at Charing Cross Hospital, London.

He then had the operation, which involved removing his tumour via an ‘iKnife’. This ‘intelligent scalpel’ tests tissue as it comes into contact with it and immediately gives information as to whether it is cancerous.

Three years on, Mr Hinnigan is tumour-free and feels like he is ‘back on his two feet again’. 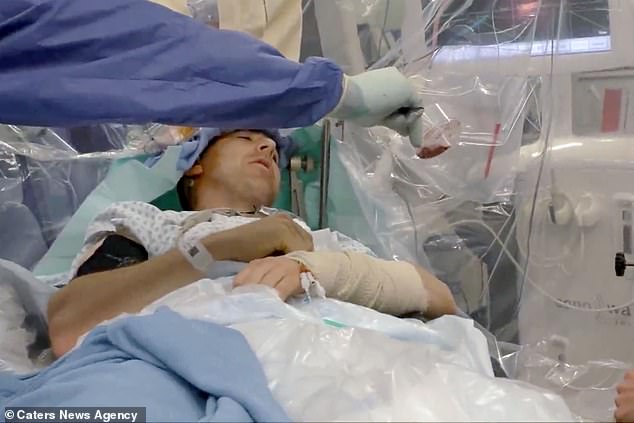 James Hinnigan was filmed during surgery to remove his stage two glioma in 2016. Mr Hinnigan was conscious during most of the operation, with him asking to see the mass once it had been taken out. The footage ends with him waving goodbye to the ‘b*****d’ 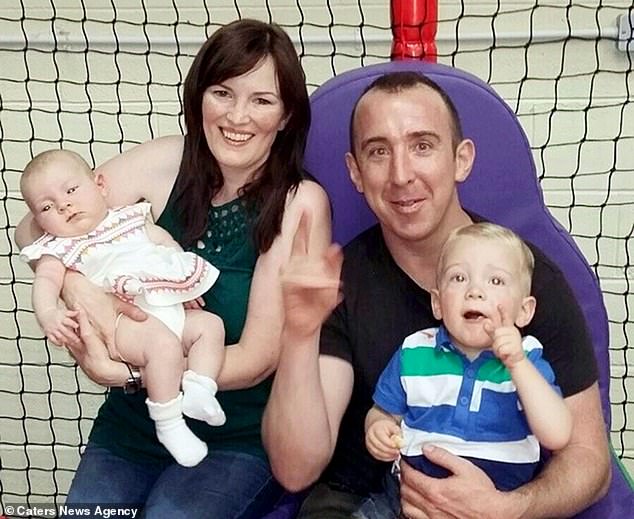 Mr Hinnigan is pictured shortly after the surgery with his girlfriend Wendi and their children Rose, now two, and Cameron, four. Wendi was pregnant with Rose at the time of the operation

Speaking of the surgery, Mr Hinnigan said: ‘I asked to see my brain tumour as I wanted to see what had been causing me so much trouble.

‘I got a bit emotional during the video too as I was so grateful that I’d been offered the lifesaving surgery.

‘In the clip I can be heard swearing at the tumour before asking it not to come back or to bring any friends. It is strange watching it back as I was in a bit of a daze at the time.’

Mr Hinnigan was initially put to sleep while surgeons opened his skull. The maintenance manager was then woken up and encouraged to chat to a nurse to help doctors monitor any damage to his speech.

WHAT ARE GLIOMA TUMOURS?

Gliomas are brain tumours starting in the glial cells, which are the supporting cells in the nervous system.

There are three types of gliomas;  astrocytoma, oligodendroglioma and ependymoma.

The most common glioma are astrocytomas, which is found in the cells of the brain that support the nerve cells.

Gliomas can be low grade (slow growing) or high grade (fast growing), and doctors use these grades to determine what kind of treatment is needed.

He can be heard counting to 13 and laughing with a nurse, who then asks him to explain paddleboarding.

Mr Hinnigan went on to become emotional and tearfully said to the nurse, ‘I’m just crying because of what you lot do,’ while she dabbed at his eyes with a tissue.

Speaking since the operation, he said: ‘I find it all fascinating and despite being nervous the nurse really put me at ease.’

When the procedure was over, Mr Hinnigan was shown his tumour, which he called a ‘decent size’ and jokingly referred to it as a ‘b*****d’.

He then gave it a wave saying ‘see you later – don’t come back and don’t bring any friends’. 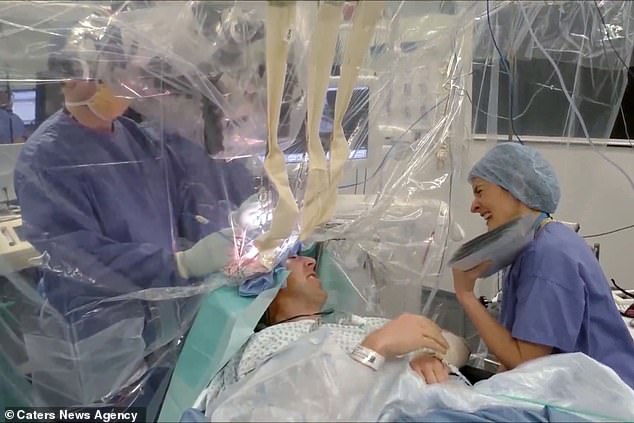 He was encouraged to chat to a nurse during the surgery to help doctors monitor any damage to his speech. The footage shows them laughing together and discussing paddleboarding 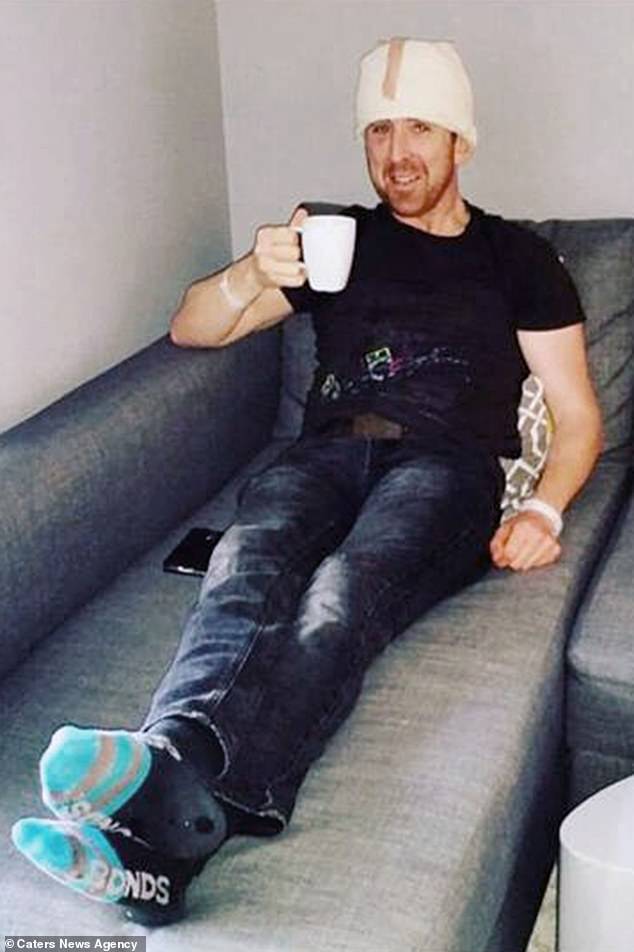 Mr Hinnigan is pictured recovering at home in Wigan, Greater Manchester, after the surgery. He is keen to give ‘hope to people who are in the same situation he was three years ago’ 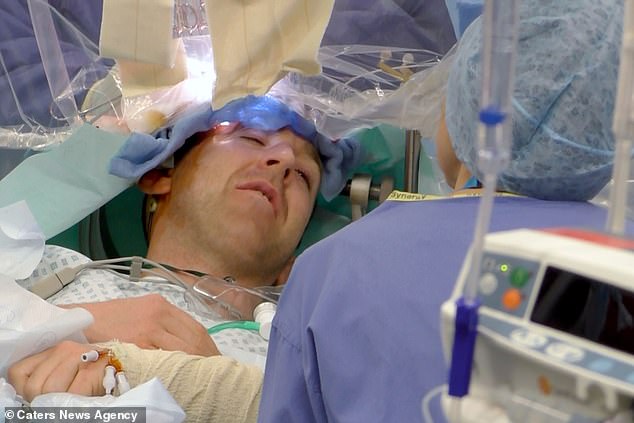 At one point Mr Hinnigan became emotional and told the nurse he was crying ‘because of what you lot do’. She can then be seen gently dabbing away his tears. Looking back on it now, Mr Hinnigan says he was in a ‘daze’ and became overwhelmed because he was so grateful

Mr Hinnigan first became unwell while living in Australia with his girlfriend Wendi, who was pregnant at the time with their now two-year-old daughter Rose.

He initially thought he was having a stroke when he developed slurred speech, and pins and needles.

After being diagnosed with a brain tumour, the couple, who are also parents to four-year-old Cameron, returned to the UK in 2016 when Mr Hinnigan was put forward for the clinical trial by his GP.

This made Mr Hinnigan eligible for surgery that used an iKnife and a laser, which enabled his tumour to be removed faster and more accurately.

WHAT IS THE iKNIFE?

The iKnife or ‘intelligent scalpel’ helps surgeons distinguish healthy tissue from cancer while carrying out an operation.

The scalpel measures the weight of molecules in ‘biologically-rich vapour’, which is released during surgery.

This enables the knife to identify what tissue it is cutting into.

Developed by Dr Zoltán Takáts, professor of analytical chemistry at Imperial College London, recent research suggests the iKnife has up to 100 per cent accuracy.

Published in the British Journal of Cancer, Dr Takáts and colleagues revealed the scalpel correctly distinguished between ovarian cancer and normal tissue in pathological samples every time.

It also distinguished various other parts of the reproductive system with 93-to-100 per cent accuracy.

This helps to ensure cancerous tissue is not left behind, which prompts the need for further treatment.

It also enables all of a tumour to be removed in one surgery, while sparing healthy tissue.

Trials are testing the iKnife in brain surgery, which would allow the entire tumour to be removed without taking healthy tissue with it.

‘If the iKnife can give us an accurate diagnosis during the operation, it could completely change the surgical approach we choose,’ Dr David Phelps, Cancer Research UK-funded surgeon at Imperial College London, said.

‘I was over the moon to be accepted onto the trial and I had surgery in March 2016 with Babar Vaqas, the trial chief investigator, and neurosurgeon Kevin O’Neill who leads the Brain Tumour Research Centre of Excellence at Imperial College,’ he said.

‘I consider myself lucky to have been accepted and I hope the trial will help further people down the line.

‘The iKnife can identify healthy and diseased tissue in real time without the need for sending biopsies and analysis during the operation.

‘They woke me up during the procedure and, by talking to me, the surgeons assessed how much tissue they could remove without damaging my speech.

‘To say I was buzzing after the surgery would be an understatement. I felt so lucky to have undergone a successful operation and I couldn’t wait to be 100 per cent, get back to work and get on with my life.’

Mr Hinnigan shared his surgery video for the first time to showcase the amazing procedure and the work of the Brain Tumour Research charity, which he is fundraising for.

Writing on his fundraising page, Mr Hinnigan said: ‘I’m putting the past behind me but it’s important to me to give hope to people who are in the same situation I was three years ago.

‘The future is still uncertain but there is life after a brain tumour diagnosis and things can get better.’

Andrew Pankiw, community fundraising manager for Brain Tumour Research in the north west, added: ‘Facing a brain tumour diagnosis can be all the more devastating at Christmas time which is why we’re extremely grateful to James for sharing his inspiring story.

‘We want to give hope to brain tumour patients and their families this Christmas, and the only hope lies in research.

‘We hope people will respond to James’ appeal to raise £5,000 this Christmas to help us fund the fight.’ 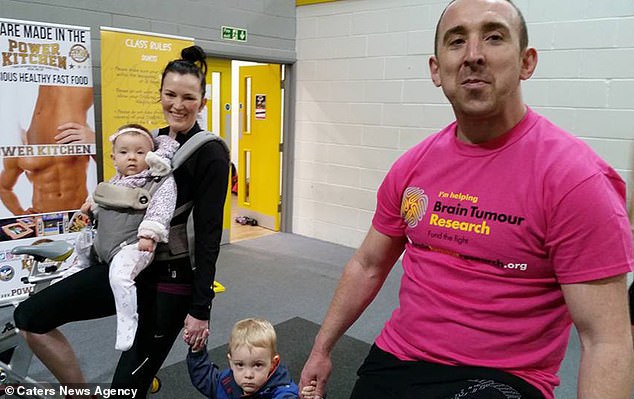 Mr Hinnigan is pictured after the surgery, with his children and Wendi, raising money for Brain Tumour Research. He hopes to raise £5,000 for the charity, which filmed his operation 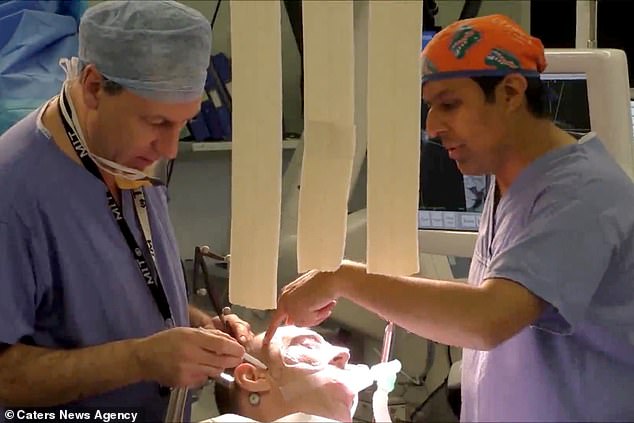