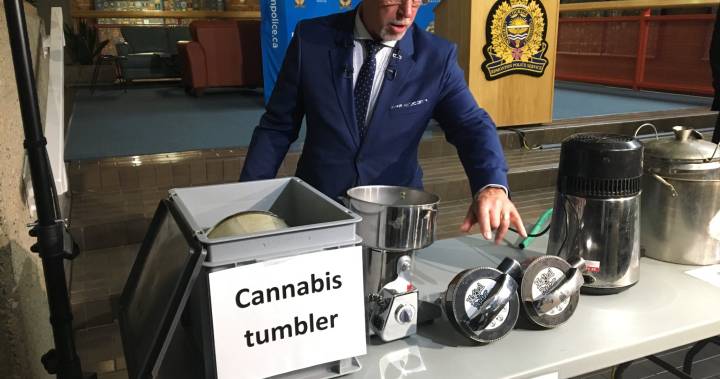 These labs isolate tetrahydrocannabinol, or THC, from cannabis to produce cannabis oil or a highly concentrated form of THC called “shatter” or “honey oil.”

Many are made from butane hash oil (BHO) using different processes while others, like rosin, are made without solvents.

The extraction practice is illegal and can be very dangerous.

On Wednesday, Edmonton police showed off some of the tools seized from homes where cannabis concentrates were being made.

Investigators said one of the problems lay in the process: it requires butane and if there’s a error, houses can explode. Police have found three such operations in the last month — and two were found after fires.

“These explosions can be deadly, not only for the individuals living in the residence being used as a cannabis extraction lab, but also for those neighbours living nearby,” Sgt. Guy Pilon, of the Clan Lab Response team, said.

“The vapour from just one regular sized can of butane has the capacity to destroy a 1,450 square foot home. These individuals are putting law-abiding citizens at risk.”

According to the Alberta RCMP, shatter looks like toffee and is commonly used for “dabbing,” when people inhale vapours while it’s heated up.

Mounties said marijuana generally has a THC level close to 12 or 15 per cent. Shatter, however, has THC levels that can exceed 80 to 90 per cent.

Edmonton police investigators are urging residents to report suspicious behaviour in their neighbourhood.

Police say signs of labs can include “empty butane canisters being put out for weekly garbage pickup, or equipment set up in residences or garages including lengthy stainless steel extraction tubes, pressurized containers connected together with wiring or new venting, which has been cut into the side of the residence.”

For more information on the health risks associated with shatter and marijuana, RCMP suggested visiting the Health Canada website.