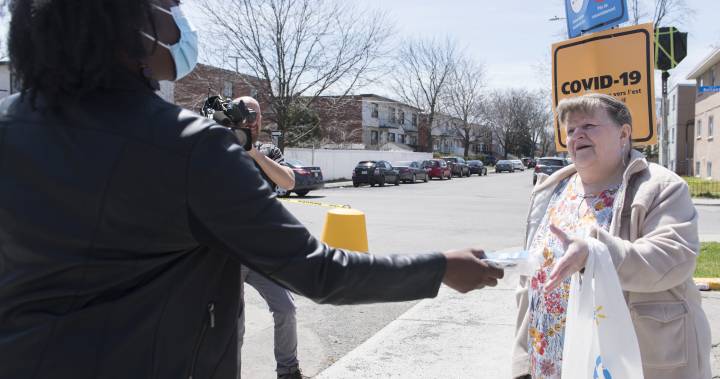 Some of Montreal’s most disadvantaged neighbourhoods appear to be bearing the brunt of the city’s COVID-19 numbers, leading community organizers to question why more wasn’t done to protect them.

Montreal North, one of the city’s poorest boroughs, had over 1,850 cases as of Tuesday evening, and the highest rate of infection in the city — more than double the city’s average.

Marjorie Villefranche, the director of the Maison d’Haiti community organization, said Montreal North and other lower-income neighbourhoods have been hit hard due to crowded living conditions, a population that suffers from pre-existing health conditions and a high proportion of the population working in health care and other essential services.

“Imagine six weeks in a three-and-a-half with five or six people,” she said, using the Quebec term for a one-bedroom apartment. “It’s difficult.”

Data released by the city of Montreal shows that many of the hardest-hit boroughs are in the city’s northeast, including Montreal North, Riviere-des-Prairies-Pointe-aux-Trembles and Anjou, which house many lower-income people, immigrants and refugees.

In all of those neighbourhoods, between 24 and 34 per cent of COVID-19 cases are among health workers — above the city average of 20 per cent — suggesting that people from vulnerable neighbourhoods are paying the price for caring for others.

Villefranche says many immigrants and refugees, including the Haitian asylum-seekers who crossed the border at Roxham Road in 2017, have sought out jobs as patient attendants in long-term care homes as a quick way to enter the workforce.

“It was a sector where there was a big demand,” she said in a recent interview.

“They needed people to work there.”

The city has ramped up its efforts in Montreal North in recent weeks, moving to install a temporary testing clinic as well as mobile ones in city buses that travel to COVID-19 hot spots or areas where barriers to testing exist. It has extended sidewalks onto the road to reduce crowding and become more active in offering information.

She said the government’s original advice, which essentially told people to stay home and stay two metres away from each other, didn’t correspond to the reality in Montreal North, where large families live together and many people work in essential services such as security, health care and food services.

“When you say to stay home, stay confined and cook at home, you’re not talking to those people,” said Villefranche, who said there should have been more information tailored to people who have no choice but to go out.

While governments were slow to spring to action, community groups stepped in, offering food, information and other support.

Wissam Mansour is among those who have been out in the streets distributing masks, gloves and information on behalf of the community group Hoodstock, which focuses on social and cultural issues in the neighbourhood.

Among the population, “there’s a lot of worry,” she said in a recent interview.

Villefranche says Maison d’Haiti has been distributing food baskets to families and helping with communication, noting that many residents don’t have internet access and some don’t speak French.

Both Mansour and Villefranche say that while the local and provincial governments have taken steps to address the situation in the borough, more action is needed.

In the short term, they say citizens need food and health care, including for mental health. Mansour wants tenants to be offered cleaning materials and protective gear to better maintain their apartment buildings.

Longer term, both say more needs to be done to help address problems of poverty and inadequate housing that make the community vulnerable to another pandemic.

“We can’t be in two crises at the same time.”