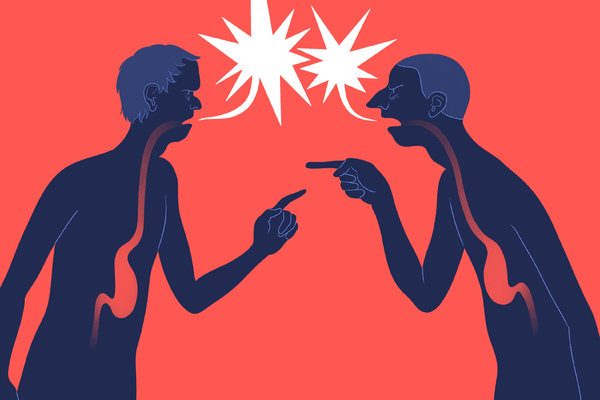 The morning walk before a holiday meal can feel like an act of advance penance: a show of restraint before the feast, best performed under a pale sun, amid a lonely scatter of leaves and with a determination to keep the campfire in sight. March off too slowly — or too far — and you’ll only annoy the other pilgrims, who likewise skipped breakfast to save room for the banquet.

Scientists have only recently begun to explore the emotional and social effects of acute hunger. (University ethics boards look unfavorably on experiments that would starve groups of undergraduates in the name of psychology.) But they already know a thing or two. For instance, numerous studies have shown that a low blood glucose level — i.e. hunger — is associated with signs of aggression, a state of mood known as “hangry.”

Hangriness is a distinct sensation of urgency and growing impatience, familiar to anyone who has waited in a long line at a cafeteria or restaurant, or stood among young children running on empty. But there are many flavors of anger, and psychologists are now trying to parse how, exactly, “hanger” differs from the furious, simmering or righteous varieties.

In a recent series of experiments, Jennifer K. MacCormack, a doctoral candidate in psychology and neuroscience at the University of North Carolina, Chapel Hill, found that people describe themselves, when hungry, as more annoyed than usual and less in control of their emotions. But that behavior arose only in specific circumstances, and only in comparison to peers who had recently eaten, Ms. MacCormack found.

In one study, she tested the patience of more than 230 hungry student participants by deliberately but discreetly crashing their computers when they were in the middle of a tedious task. That frustration alone was not enough to get a rise out of the hungry students. Ms. MacCormack had divided the subjects into two groups, one that focused on their emotional state as they worked on the computer and another that did not. Only the individuals in the second group, presumably less self-aware of their growing agitation, showed clear signs of stress and annoyance when the computer crashed.

“Being hungry clearly does change our affect, our emotional state,” Ms. MacCormack said. “But this evidence suggests that it does not automatically lead to being angry or more selfish.”

A recent series of experiments, led by Jan Hausser of Justus-Liebig-University in Germany and Nadira Faber of the University of Oxford, reached a similar conclusion. The researchers found that acutely hungry college students were as generous toward strangers as sated ones were. In one experiment, 51 students who had not eaten in 14 hours participated in so-called cooperation games, which digitally simulated joint investment decisions and rated the selfishness of those decisions. The students were famished, by their own reports, and measures of their blood glucose levels confirmed as much.

But they were just as generous in the cooperation tests as 51 peers who had arrived at the lab well fed, the study found. The researchers then tested the results in the real world. They recruited more than 600 participants at a cafeteria, half before they had eaten and the other half after lunch. Each participant was given either money (10 euros) or food (packets of dried fruit and nuts) and soon after was approached by a stranger, discreetly working with the research team, with a request: “Could you spare some change, or something to eat? I’m hungry.”

The famished students shared just as much of their money or food as the students who had just eaten, the study revealed. “We found that this big sensation of hunger did not affect how prosocial and cooperative these students were,” said Paul A.M. Van Lange, a psychologist at VU Amsterdam and an author of the study.

In effect, he and Ms. MacCormack argue, the social generosity of humans appears to be sufficiently deep-seated and potent to trump the irritation of an empty stomach, at least of the affluent Western variety. “One thing this research suggests to me is that, deep down, we humans may be more prosocial than we think we are” when short on resources, Dr. Van Lange said.

Michael Bang Petersen, a political scientist at Aarhus University in Copenhagen, has found, similarly, that hungry people are just as likely to endorse generous social programs as are individuals who have eaten recently.

“The common wisdom is that being hungry makes people irritable, and that of course has some basis in fact,” Dr. Petersen said. “The problem facing us currently is to understand how we can have these feelings of increased irritability and a perception that we lack of self-control, and yet often do not act that way.” Hunger doesn’t drastically change our behavior, but we think that it does — why?

Posing all of this to a tipsy, sarcastic uncle with pumpkin on his shirt may not be a recipe for Thanksgiving peace. But by then hunger can be no excuse, and there’s always the option of the post-meal evening walk, this time for digestion.