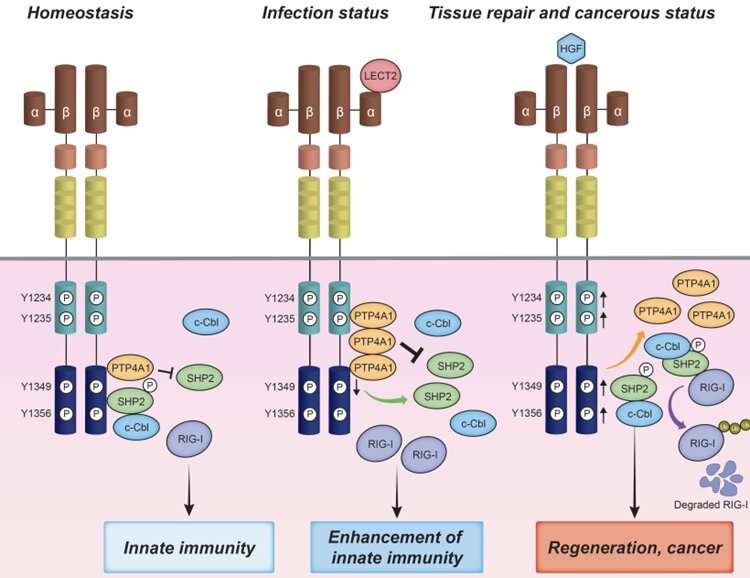 Innate immunity is activated when the pattern recognition receptors (PRRs) recognize pathogen-associated molecular patterns (PAMPs). A research team from Kanazawa University has shown that a liver-derived secretory protein LECT2, a hepatokine, binds to the HGF receptor MET, a proto-oncogene product, to suppress the proliferation signal of MET. LECT2 activates retinoic acid-inducible gene-I, enhancing antiviral and innate immune responses through MET. Thus, LECT2 is an anti-proliferative and immunoregulatory factor that could be a therapeutic target for viral infections and cancer.

The liver is the largest organ in the human body. It is suggested that hepatokines secreted from the liver play important roles in hepatocytes as well as immunocompetent cells in other organs. In this study, the team focused on LECT2, a hepatokine, and conducted research aimed at elucidating the mechanism of action of LECT2 on hepatocytes for the purpose of exploring the possibility of new treatment methods.

RIG-I is an important innate immune sensor that recognizes viral RNA and promotes interferon (IFN) production. In recent years, it has been reported that host RNA binds to RIG-I and regulates its activation. The research team previously showed that the mRNA of selenoprotein P, one of the hepatokines, binds to RIG-I and negatively regulates the innate immune responses (Murai, Honda, et al., Cell Host & Microbe, 2019). However, how host proteins regulate RIG-I activation is not sufficiently understood. Therefore, in this study, the team focused on LECT2 and investigated how LECT2 contributes to the innate immune responses upon viral infection.

First, the team found that the expression of type I IFN and IFN-stimulated genes was significantly enhanced in cells treated with the LECT2 protein upon viral infection. As a result, the virus replication was significantly suppressed in cells treated with the LECT2 protein. Interestingly, induction of RIG-I expression was observed in cells treated with LECT2, while induction of the expression of other PRRs) such as MDA5 was not observed. Next, the team created LECT2 transgenic mice (LECT2-TG) and knockout mice (LECT2-KO), and infected these mice with lymphocytic choriomeninitis virus (LCMV). It was found that LCMV replication was markedly decreased in the LECT2-TG mice while it was markedly increased in the LECT2-KO mice. These results clearly indicate that LECT2 is an important hepatokine for virus elimination.

LECT2 is known to bind to the HGF receptor MET, the product of a proto-oncogene. Therefore, the team examined how MET itself would affect the innate immune responses. Interestingly, the viral RNA-induced expression of type I IFN was markedly suppressed in cells in which MET had been knocked out. Furthermore, LCMV replication was significantly increased in mice in which MET gene expression was suppressed by antisense oligo (Gapmer) compared to mice in which control Gapmer had been introduced. These results clarified that MET itself played important roles for the innate immune responses.