F.D.A. Will Still Allow Sales of Flavored E-Cigarettes, but Will Seek a Menthol Cigarette Ban

Stopping short of its threatened ban on flavored e-cigarettes, the Food and Drug Administration said on Thursday that it would allow stores to continue selling the products, but only from closed-off areas that are inaccessible to minors.

The proposed menthol ban would be the most aggressive action the F.D.A. has taken against the tobacco industry in nearly a decade, and it was notable given the Trump administration’s business-friendly approach to regulatory issues.

If it clears the usual federal regulatory hurdles, a process which could take at least two years, the menthol ban could make a significant dent in cigarette sales. Menthol cigarettes account for about 35 percent of cigarette sales in the United States.

The three measures have a common target: the myriad flavors used to entice young people to vape and smoke. In restricting flavored e-cigarettes, the F.D.A. is trying to curb the rapid escalation of youth vaping. Some 3.6 million people under 18 reported using e-cigarettes, the agency said.

“Almost all adult smokers started smoking when they were kids,” Dr. Scott Gottlieb, the agency’s commissioner, said in a statement. “Today, we significantly advance our efforts to combat youth access and appeal with proposals that firmly and directly address the core of the epidemic: flavors.”

Still, the plan to sequester flavored e-cigarettes in stores, rather than ban selling them, was surprising to many people since details of a stronger proposal leaked out widely from the agency over the past week. Members of Congress sent out news releases, praising the agency for a ban that did not materialize. Federal law already prohibits the sale of cigarettes and e-cigarettes to anyone under 18.

But lawyers said the agency did not have the legal authority to impose such a ban without going through a long, complicated process that would have inevitably ended up in protracted court battles.

In trying to navigate between public health concerns and a reluctance to heavily restrict e-cigarettes at this time, Dr. Gottlieb urged manufacturers to police themselves. “We hope that in the next 90 days, manufacturers choose to remove flavored ENDS products”— referring to the devices— ”where kids can access them and from online sites that do not have sufficiently robust age-verification procedures,” he said in the statement.

The mere threat of a ban, which he suggested two months ago, led e-cigarette makers in recent days to anounced plans of their own that go beyond what the F.D.A. laid out on Thursday.

Juul Labs, which is by far the largest e-cigarette seller, announced on Tuesday it would suspend store sales of its flavored pods, except for mint, menthol and tobacco, and shut down its social media promotions. And it said it would toughen its online age-verification requirements. But it left the door open to resume orders for thousands of convenience stores, gas stations and other outlets across the country, if the retailers abided by age verification measures.

“Does this mean a simple curtain with a sign like we used to see at the entrance to the pornography section of video stores?” asked Matt Myers, president of Campaign for Tobacco-Free Kids.

“It is not as severe as the commissioner had originally called for,” said Lyle Beckwith, a spokesman for the National Association of Convenience Stores, a trade group.

When asked whether a fair interpretation of the new rules might be that convenience stores could sell flavored e-cigarettes as long as the products are under the counter, out of sight and inaccessible to minors, Mr. Beckwith replied, ”We will be reviewing the regulation and advising our members accordingly.” 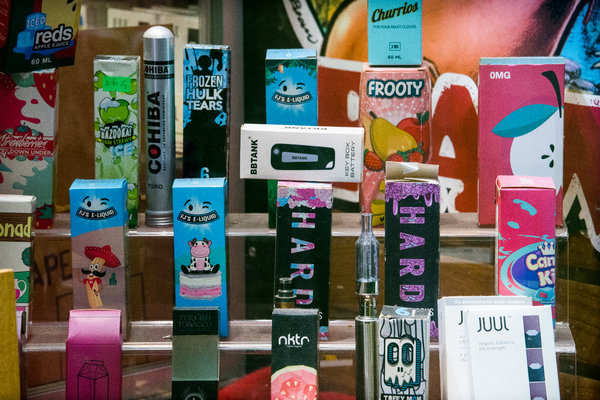 He noted, as an aside, that his teenage son has said that his vaping peers all get their flavor pods from older kids, not from convenience stores.

Azim Chowdhury, a lawyer who represents vape manufacturers and vape shops, said that the simplest way for the shops to continue to sell all flavors without walling off displays was to restrict entire stores to consumers 18 and older, a policy that many of his clients were already following.

He noted that 18 is a floor, not a ceiling: In California, for example, consumers of tobacco and e-cigarettes must be 21.

“The F.D.A. seems to be recognizing the value that these products have for adults,” he said. “My clients don’t want kids to use them either. But adults enjoy flavors, too.”

The agency said it would provide more detail on how to restrict access at a later date.

Critics said that exempting menthol and mint e-cigarettes from the restriction was misguided, because of the large number of youth vapers who buy them.

But Mr. Chowdhury considered Juul’s pre-emptive move to limit visible flavors to mint, menthol and tobacco shrewd. If indeed a ban on menthol cigarettes is enacted, he said, “Juul is in a good position to offer an alternative product for smokers who are used to their menthol flavor. Because Juul has market dominance, they stand to benefit from an ultimate ban.”

Altria, RJ Reynolds, a subsidiary of British American Tobacco, and the other major tobacco companies that sell in the United States were not immediately available for comment. But they have all made clear to the F.D.A. that they will fight any ban on menthol cigarettes — as they have for many years.

Dr. Gottlieb, who was appointed by President Trump, is in an unusual position for a Republican appointee. His confirmation in May 2017 drew dire warnings from some public health advocates, who protested in particular his investments in Kure, a chain of vaping lounges. These complaints grew louder in July 2017, when Dr. Gottlieb extended the deadline by five years for e-cigarette companies to meet new standards.

The industry contends that restricting sales of flavored e-cigarettes will make it harder for adults to reduce their health risks by substituting them for traditional, combustible cigarettes.

“Flavors are important for switching,” said Dr. Moira Gilchrist, a scientist with Philip Morris International, which wants to sell its IQOS heat-not-burn device in the United States in tobacco and menthol flavors, during a visit to Washington last month for an F.D.A. public meeting, and some visits on Capitol Hill.

She added:“ The focus should be on what is the right thing to do for the 40 million men and women in the United States would otherwise continue to smoke cigarettes.”

In a statement circulated upon news of the ban, the NAACP, National Urban League, the National Medical Association, and the African American Tobacco Control Leadership Council said a menthol ban is long overdue.

“While we’re saddened by the number of lives lost and new smokers addicted over the past decade, we’re pleased that the F.D.A. is moving in this direction,” said Delmonte Jefferson, executive director of the National African American Tobacco Prevention Network. The group also praised the agency for taking on flavored cigars.

“Little cigars like Black & Milds and Swisher Sweets are heavily marketed to African Americans and are often cheaper in our neighborhoods,” said LaTroya Hester, a spokesman for the network. “A lot of young, black kids don’t know that cigarillos are just as dangerous, so hopefully this will send that message. This is a huge step in protecting their health — It’s about time our young people are prioritized.”