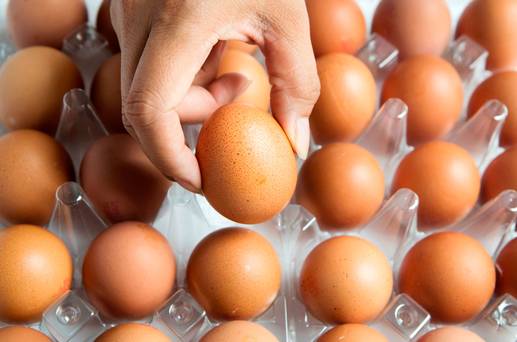 Introducing peanuts and eggs to high-risk babies as early as three months could prevent them from developing allergies to those foods in later life, a study suggests.

Scientists have found that infants who were at high risk of developing allergies to certain foods and were offered those foods in small quantities at three months of age had a lower chance of reacting severely to the allergenic solids than those who were introduced to them at six months old.

The research is a continuation from The Enquiring About Tolerance (EAT) project where more than 1,300 three-month-old babies were recruited in England and Wales and tracked over three years.

In the controlled trials, the babies were tested for existing allergies before being randomly split into two groups.

The Early Introduction Group (EIG) was asked to introduce six allergenic foods – including eggs, milk, wheat, peanuts, fish and sesame – from the age of three months alongside continued breastfeeding, with the help of a dietitian and support from the study team.

The second group – called the Standard Introduction Group (SIG) – was told to follow standard UK government advice to exclusively breastfeed for around six months, after which introduction of allergenic foods would be a matter of parental choice.

Both groups were then tracked to see if they developed any long-term allergies to those foods between the ages of one and three years old.

Among babies sensitised to peanuts at enrolment, 33.3pc of those in the SIG went on to develop a peanut allergy compared with 14.3pc of the infants in the EIG. And among those sensitised to egg at the beginning of the study, 48.7pc of the infants in the SIG developed an egg allergy compared with 20pc in the EIG.

According to the researchers, the results were “still evident” even though only 223 of 529 children (42pc) in the EIG group strictly followed the early introduction regime of consuming three grams of allergen protein per week.

Overall, among children with any food sensitisation at the start of the trial, 34.2pc of those in the SIG developed food allergy in comparison with 19.2pc of children in the EIG.

Low adherence to the food introduction regime appeared to be most prominent among populations of increased maternal age, non-white ethnicity and lower maternal quality of life, the researchers said.

The team also found that early introduction of allergenic foods to non-high-risk infants were not associated with any increased risk of food allergy.

Gideon Lack, a professor at King’s College London and the EAT study’s principal investigator, said: “These results have significant implications and are informative when it comes to infant feeding recommendations concerning allergies and the development of new guidelines.

“If early introduction to certain allergenic foods became a part of these recommendations, we also have data that tells us what populations may need extra support when it comes to implementing the recommendations.”

The research is published in a series of papers in the Journal of Allergy and Clinical Immunology.

Commenting on the findings, Michael Walker, of Laboratory of the Government Chemist (LGC), said: “The research is a more detailed statistical analysis of the data from the original EAT study in the light of blood test data.

“As we move to issue new infant feeding guidelines, these findings will inform the debate as to whether the effort to introduce potentially allergenic foods into babies’ diets are best directed at those most at risk or more generally on a population basis.”