For devout Muslims, praying multiple times a day is a lifelong observance and a core aspect of their faith. But osteoarthritis of the knee (KOA) can make kneeling and prostration challenging. To address this problem in an aging U.S. Muslim population, a multicenter team developed literature-based guidelines published online in Arthritis & Rheumatology. 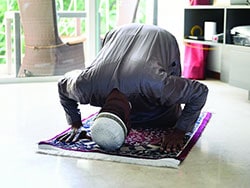 Could you detail the clinical and cultural context for these recommendations?

Haque: Muslims currently make up 1.1% of the U.S. population, or 3.45 million people. This guidance provides advice to Muslim patients with KOA in a culturally sensitive manner that can supplement standard care. Prayer, or Salah, is a religious obligation typically performed in 17-48 daily repetitions of squatting, floor sitting, full-knee flexion, and kneeling. For patients with KOA, prayer can be painful, and a few studies have found a link between these repeated movements and KOA progression.

Yet recommending stopping or limiting prayer is insensitive, so our group did a thorough literature search to identify easily implemented and culturally appropriate ways to ease praying.

Is there a traditional preference for praying on a hard surface?

Haque: Prayer can be performed on any surface that is clean and free from impurities. Cushioned and carpeted surfaces are permissible if the surface is somewhat firm and supportive for when worshippers prostrate themselves and put their faces on the ground. For example, compacted snow that wouldn’t allow the face to sink into it is permissible, but snow that is soft and would allow the face to sink in is not.

Have an increasing number of older patients raised the issue of knee pain during prayers?

Haque: We found no research on this in the literature. Anecdotally, however, two of our authors lead prayer in large Muslim communities in Detroit, and people often share with them that they feel discomfort during prayer and ask if there is anything they can do to limit this.

It is important to dispel the common myth that after total knee replacement one cannot kneel. About 20% of patients have some anterior knee discomfort after total knee arthroplasty, which can be exacerbated by kneeling, but kneeling causes no harm and can be done safely.

Could you outline the main recommendations?

The mechanics recommendations involve bracing with the palms down, standing up using the hands and knees, and guiding prayer motions with the hands. Chairs may be used as well.

Lifestyle recommendations outline home-exercise programs tailored to KOA and suggest the use of ice and compression during acute exacerbations.

Could these recommendations benefit other arthritic joints such as the wrists?

Haque: Anecdotally, our authors do not hear about pain in joints except for the knee and spine. To a limited extent, some of these recommendations may help patients with spinal arthritis as well.

What do you see as the greatest obstacle to implementation?

Haque: These recommendations, although permissible in the Muslim faith, are not part of traditional ritual and thus patients may simply forget to implement them. We advise physicians to ask patients which recommendations they are most likely to follow and to monitor how these have worked for them.

What is your best overall advice for broaching this issue with patients?

Haque: Holistic, functional, and culturally sensitive recommendations will be highly appreciated. Physicians are therefore encouraged to share this guidance with Muslim patients while using terms such as Salah, pronounced saa-laah, and Sajdah, pronounced sajduh and meaning prostration, and engage in a healthy dialogue.

These guidelines received no funding. The authors disclosed no competing interests relevant to their recommendations, but Dr. Magrey reported consulting and research relationships with private-sector companies outside of this work.