Limit yourself to just ONE alcoholic drink a day to avoid booze-related diseases health official claims, as he calls for minimum pricing in the whole of the UK and Europe

People should drink no more than one alcoholic drink a day to avoid booze-related diseases, health official claims.

Professor Jurgen Rehm, adviser to the World Health Organization, stresses there is no safe level of alcohol consumption but one drink is considered ‘low risk’.

He argued 29 per cent of all alcohol-attributable deaths in the EU are from cancers.

Professor Rehm believes minimum unit pricing (MUP) for alcohol is serious ‘ammunition’ against related diseases, and should be introduced throughout the UK and Europe. 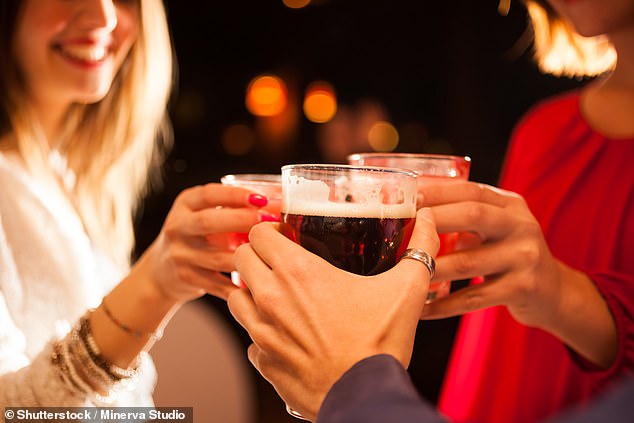 People should drink no more than one alcoholic drink, health official claims (stock)

Professor Rehm stressed people should consume no more than one unit of alcohol a day and hit out at past Government guidelines that suggested there is a level of ‘safe’ drinking.

‘There is no safe drinking. Low-risk [drinking] in the UK would be one drink a day,’ he said.

Responding to his comments, Dr Eric Carlin, director of Scottish Health Action on Alcohol Problems (SHAAP), said: ‘SHAAP strongly support the UK CMOs’ guidance which is no more than 14 units per week, before health is likely to be harmed.

‘However, it is true to say that no level of alcohol is risk free, especially in relation to cancer risks.’

Alcohol has been linked to the onset of seven different types of cancers, including breast, bowel and mouth.

These are thought to occur due to alcohol being converted into the toxic chemical acetaldehyde in our bodies, which can damage DNA and prevent cells from repairing themselves.

A spokesman for the Alcohol Information Partnership, a group funded by eight alcoholic beverage producers that aims to promote balanced debate about drinking, said: ‘The UK has one of the lowest recommended levels of alcohol consumption at 14 units a week.

‘That reduction was made relatively recently so it would be surprising and potentially confusing if the guidelines were to be changed again.

‘Most people in the UK drink moderately – in fact, recent statistics show a decline in binge drinking, particularly among young people.

‘Where there are problems with harmful drinking, we think targeted interventions are often much more effective than blanket measures.’ 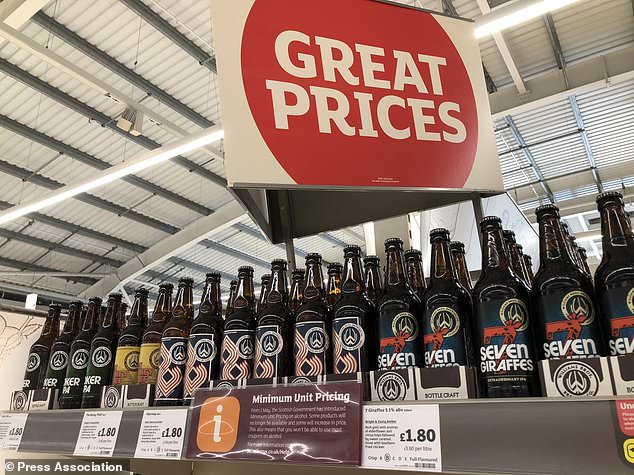 The Scottish Government policy to set a minimum price of 50p per unit of alcohol finally came into force in May after years of delays due to a legal challenge.

It is estimated the move could save around 392 lives in the first five years.

Scotland has a particularly bad alcohol problem, with 22 people dying from booze-specific deaths and 697 people being taken to hospital every week.

Figures presented at a joint meeting on alcohol and health in Edinburgh, led by the WHO and the Alcohol Policy Network in Europe, demonstrate the continent continues to have the highest level of alcohol consumption in the world.

Every day, around 800 people in the EU, Norway and Switzerland die from alcohol-related causes and there have been ‘no significant changes’ in consumption levels since 2010.

Professor Rehm, a senior director at the Institute for Mental Health Policy Research at the Centre for Addiction and Mental Health in Canada, said a drop in alcohol-related deaths in Europe from 301,000 in 2010 to 291,000 in 2016 is hardly a big success.

He also pointed to ‘huge problems’ with drinking among young people in Europe, particularly noting the widespread prevalence of binge-drinking.

Asked about the likely impact of MUP in Scotland, he told reporters: ‘Very clearly minimum unit pricing is going to have a significant impact.’

He pointed to the ‘pretty great success’ of similar pricing restrictions in countries such as Russia, saying it reduces consumption both among binge drinkers and those with an alcohol dependency.

Drink-related accidents, injuries, violence and public disorder will also go down with increases of minimum pricing, he added.

Echoing that sentiment for the rest of the UK, he claimed the country paints a ‘unique picture’ when it comes to alcohol, noting problems with binge drinking and higher levels of consumption among women.

‘What should play a role here would be minimum pricing in all parts of the UK,’ he argued.

Dr Joao Breda, head of the WHO European Office for Prevention and Control of Noncommunicable Diseases, said MUP is a policy that ‘protects the vulnerable’.

‘Issues like using price, they are very strong and very important ammunition that should be considered by all countries and it’s one of the measures that countries use less,’ he said.

Professor Rehm suggested bars and restaurants should change the serving sizes of alcohol and reduce the booze content of drinks.

He added tests have shown people cannot tell the difference between a beer with 5 per cent alcohol and one of 3.5 per cent.

This comes after research released earlier this year suggested alcohol sales in England would fall by 38 per cent from £35 billion to £22 billion a year if everyone kept to the recommended 14 units a week.

A quarter of drinkers fail to stick to the Government’s guidance of no more than 14 units a week, a study found today.