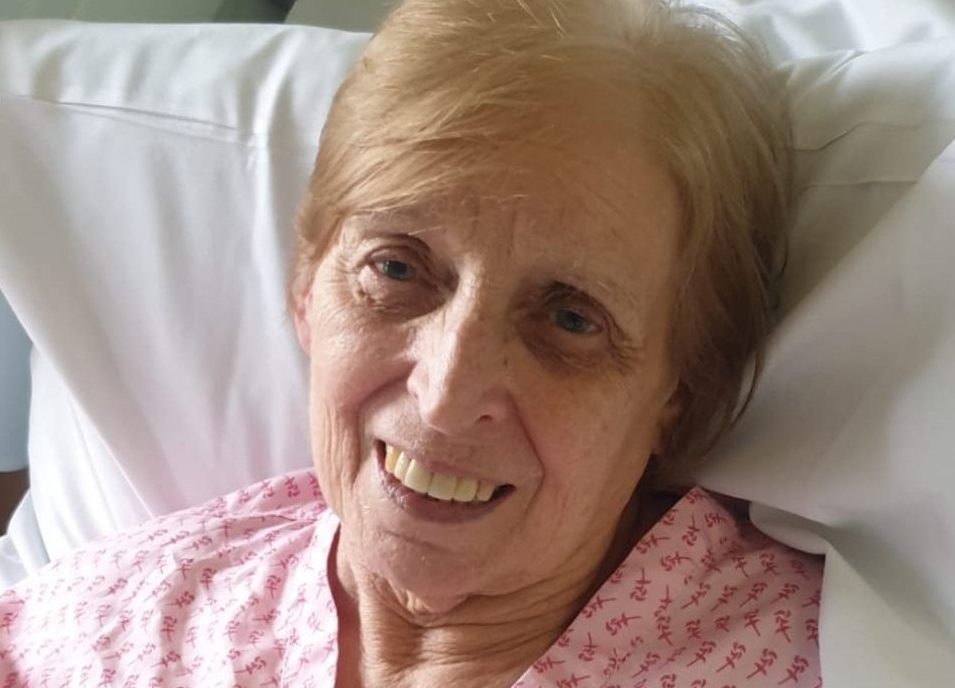 Lying in a hospital bed, my 43-year-old daughter Susan held my hand.

‘The operation was a success,’ she told me tearfully. ‘They said if you hadn’t come in when you did, you wouldn’t have made it.’

My own eyes stung with tears too, as I realised just how serious it had been. And to think, I’d thought my aches and pains had just been a tummy bug. If Susan and my husband John hadn’t pushed me to go into hospital, I could have lost my life.

I’m 75 years old. On a Thursday afternoon a few weeks ago, I started to feel a bit strange.

My stomach felt as if I had food poisoning from the bacon I’d made for lunch. I just felt strange: a slight pain on my left but no sickness. I asked John if he thought something was off, but he shook his head.

I could feel this weird sensation across my stomach; it was a slight twinge. Sitting myself down in the living room to let lunch digest, I nodded off.

That in itself should have been a sign something was wrong.

I never sleep during the day and I’m always on the go as a full-time carer for my husband. He has progressive multiple sclerosis; he has no use of his legs and has lost a lot of his upper body strength, so has to shuffle on his bum backwards.

When I woke up, John asked whether he should call the doctor. I didn’t think it was that bad though, and the day went on as usual. I felt tired but that was it.

The next morning, I woke up a bit later than normal, at 9am. John asked me if I was OK, and I was: but this strange sensation across my tummy was still niggling me. I’m never unwell, so I dismissed it as a tummy bug. ‘It’ll pass,’ I told myself.

But on Saturday morning, after waking early and watching the news in bed, I tried to get up. I didn’t even have the strength to lift myself.

All I could do was move my legs to the side of the bed. John sleeps downstairs due to his disability and was trying to call me on my mobile but I couldn’t reach it, as it was on the other side of the bed.

Eventually, he made it to the bottom of the stairs, shuffling on his bum to move, and shouted up to ask if I was OK. ‘I can’t get out of bed,’ I replied, bewildered. I was shocked and confused.

Susan, who lives 20 minutes away, arrived first. She helped me to sit up and gave me a cup of tea. When the paramedics turned up, I still had no strength. I wasn’t in pain, I just felt weak and was sweating.

As the paramedics checked me over, they noticed I had a high temperature and potential sign of sepsis. Still, when they said they wanted to take me to A&E, I shook my head. I had too much to do, I couldn’t go to hospital.

I think they must have been in shock when I told them I’d just go and see my GP on Monday.

Thank goodness Susan and the paramedics convinced me to go in, because a scan showed my appendix had burst. The next morning, I was rushed into theatre where an hour-long operation took place. The infection had gone into my stomach and up to my lungs.

They said it was messy it had burst and was full of pus. Had it been left another day it would have been life threatening and I could have died.

My recovery has been slow as I developed Covid-19 and the wounds from my surgery are still healing.

I went into hospital for a couple of weeks and then to rehab. I am now back home but under care and cannot go back to normal straight away as it still takes me time to do things.

I still find it shocking now, how ill I was when I was never in actual pain and I want everyone to be aware that any sign of pain in the stomach needs to be taken seriously – and checked out.

If my daughter hadn’t insisted I go to hospital, I wouldn’t be here today to give this warning.

As told to Minreet Kaur