Home » Health News » ‘It needs to stop’: Owner of dead dog pleads for end to use of rabbit poison 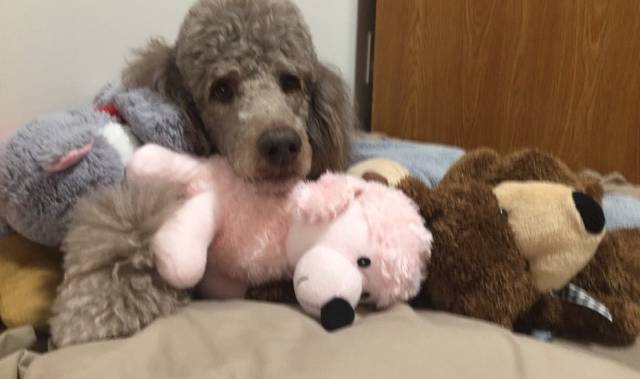 ‘It needs to stop’: Owner of dead dog pleads for end to use of rabbit poison

On the evening of July 17 Coffee, a four-year-old purebred Standard Poodle, was playing in Wascana View neighborhood park.

His owners saw him eating grass and rabbit droppings and took him home.

“I kept laughing at him but telling him, ‘No,’ as it was gross,” said owner Geri Nistor in a message sent to Global News.

On July 20, Coffee died. The cause of death was later determined by a Regina veterinarian to be poisoning.

A supplied photo of Coffee in his Regina home.

Traveling with your pet and staying stress free

Nistor says she noticed a change in Coffee’s behaviour the morning after they were in the park.

“Coffee didn’t seem to have his usual burst of energy,” Nistor said. “I laughed at him, telling him he was lazy.”

Over the next 24 hours, Coffee’s condition worsened. Nistor says the dog refused to eat and threw up several times. First, Nistor called a vet who told her dogs often get sick after eating too much grass.

But Coffee’s health continued to decline.

On the evening of July 19, Coffee began heaving and whimpering. Nistor and her husband rushed Coffee to the vet, where the dog collapsed.

“The vet injected adrenaline into him to get his heart beating stronger and put an oxygen mask on him… I held him for a while crying to him to ‘stay with mommy.’”

Coffee’s condition did improve slightly at that point, she said. He was able to stand under his own power, but still showed signs of weakness. Nistor and her husband brought Coffee home, where the dog remained sluggish and unable to stand. In the early hours of July 20, Coffee passed away, his head nestled in Nistor’s arms.

“I fell to the floor crying and yelling out, ‘why?’” Nistor’s message reads.

Nistor and her husband then brought Coffee to their own vet. About two weeks later, the vet informed them they had found poison in the dog’s bloodwork. Nistor says that after speaking with her vet and others in Wascana View, she determined the poison was most likely meant for the many rabbits that inhabit the area.

“We realized that Coffee had obviously eaten grass laced with poison meant for the rabbits, and that he possibly got it double dosed as he was eating rabbit poop.”

Nistor says she knows spreading the word about the incident will not bring back her beloved dog. She says she’s speaking up now in hopes she can help prevent something like this from happening again.

“Whoever is taking it into their own hands to deplete the rabbit population needs to realize the consequences,” Nistor said. “People’s pets are suffering and dying. Children could be as well. It needs to stop!”

The Regina Police Service has since become involved.

After seeing a social media post on the Wascana View Neighborhood Watch Facebook page, police say they made contact with Nistor to confirm the details surrounding the event. Last week they announced they’ve launched an investigation into the issue.

“We’re not sure at this stage whether it was accidentally ingested by this dog, we don’t know the substance it may have been contained in,” said RPS spokesperson Elizabeth Popowich. “We don’t even have an exact location or time, but we believe it happened in Wascana View neighborhood park”

They said this kind of incident is very uncommon in Regina.

“As near as I can recall — probably in the past 10 years — we’ve had one summer where we had a few instances where we believe dogs ingested poison,” said Popowich. “It’s not only concerning for pet owners but for everybody who enjoys the outdoors.”

The part of Wascana View park, dubbed by locals as “Rabbit Hill”, where Nistor’s dog Coffee was playing before he got sick.

On Sunday morning Global News visited the area to see how the incident has affected dog owners in the area.

Shaylin Pillay, who grew up in Wascana View, was walking his family dog ahead of the Labour Day classic.

“I’m just being really careful about letting her eat the grass or go anywhere off-leash. I try to keep her really close to me and let her not go on her own like that,” he said.

Pillay echoed concerns that poison of any kind can have consequences beyond killing rabbits.

“This park is for everybody and people use it for a lot of things. I’ve used it since I was a little kid. Kids play all the time so be really careful. We’d hate to have something bad happen to somebody like that.”