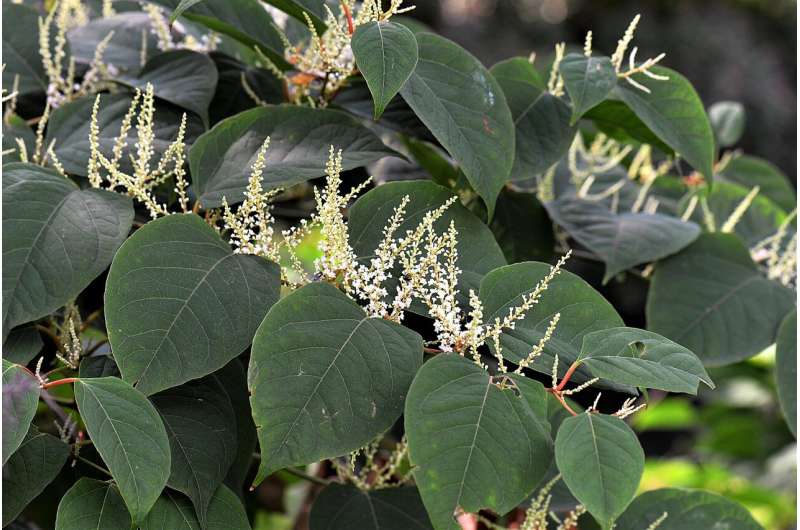 Bacon could be back on the menu of health-conscious diners thanks to an unlikely salvation: Japanese knotweed.

The fast-growing plant, feared by homeowners for its ability to invade gardens and buildings, contains a chemical which could take the place of the nitrite preservative in cured meats such as bacon and sausages.

Diets high in nitrite have been linked to a higher risk of colorectal cancers—leading scientists, including at the University of Reading, to look for alternatives.

The PHYTOME project has developed processed red meat that includes added natural substitutes which reduces the carcinogenic compound nitrite added to preserve meats. The range of sausages and hams had a mixture of plants and fruits added to them which included rosemary, green tea, and resveratrol—an extract taken from Japanese Knotweed.

As well as developing versions of cooked and dry cured red meats which replaced nitrite with these natural alternatives, the project also tested whether those substitutes would have an effect alongside normal nitrite levels found in processed red meats.

In a paper published in Molecular Nutrition and Food Research, the international team of scientists have tested the specially formulated products against conventionally processed red meat as well as white meat.

They found that tell-tale signs of nitrite content in participants’ faeces were significantly lower from both specially formulated meats, and levels were like those who were fed on minimally processed white meat.

Gunter Kuhnle, Professor of Nutrition and Food Science at the University of Reading, said:

“The ongoing worries about highly processed red meat have often focused on the role of nitrite, and its links with cancer. The PHYTOME project tackled the issue by creating processed red meat products that replace additives with plant-based alternatives.

“Our latest findings show that using natural additives in processed red meat reduces the creation of compounds in the body that are linked to cancer.

“Surprisingly, the natural additives seemed to have some protective effects even when the red meat still contained nitrite. This suggests that natural additives could be used to reduce some of the potentially harmful effects of nitrite, even in foods where it is not possible to take out nitrite preservatives altogether.”

A major consideration for the team was how the nitrate content in drinking water can significantly affect the formation of nitrite, which is produced in the body, as found in previous research.

The team controlled for this by controlling water content during the trial and participants were tested with both low and high nitrate-containing water across separate testing periods.