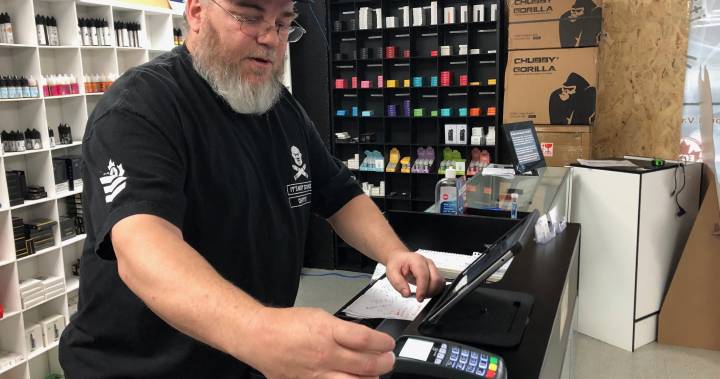 People in the Canadian vaping industry are calling for more information following a recent media conference warning about its harmful health effects.

At a media conference, Dr. Chris Mackie, medical officer of health for the Middlesex London Health Unit, announced the first case of vaping-related illness in Canada.

Lars Van Kessel, owner of It’s Not Smoke, It’s Just Vapour in London, reached out to Dr. Mackie, angry that the health unit is not releasing the name of the specific product that leads to the illness.

“He said a vaping product puts a person on life support and he stopped. He refused to acknowledge, he refused to give information on what actually happened. Was it nicotine poisoning? Was it something in product? was it contaminated?” Van Kessel.

“None of that information was answered and instead he just puts out the blanket statement that vaping is bad.”

Van Kessel is not alone in his response.

Mackie said they started getting backlash even before the announcement was made, but added it’s not a brand issue.

“People want to say it’s the brand, well if you get shot by a bullet it does not really matter what the brand is,” he said.

“Advocates are quick to point out that vaping is safer then smoking, which is technically true, but smoking kills 20-million people a year, so you are setting the bar pretty low if you’re comparing it with smoking to say your product is actually safe.”

Van Kessel said he is not advocating vaping for teens or that it’s healthy but he does advocate for it being a better alternative to cigarettes.

A recent study from Health Canada showed 1 in 4 teens in grades 7 to 12 have tried e-cigarettes.

“So many young people are starting to vape and what this means is we will have a whole new generation that’s addicted to nicotine and many of them will turn to tobacco later on in life,” said Mackie.

Although this recent London case is the first in Canada, there have been seven reported deaths and hundreds of cases in the U.S.

The province of Ontario is starting to look into the long term health effect associated with vaping and specific brands.

Mackie said people can expect more data in the coming months. From that, the province will be able to tell if there is a particular brand that’s causing more vaping-related illness than others.

Little information is known about the long term health effects at this time but Mackie does add this does not mean users should go back to cigarettes.