Low carb diets DO work and are the best way to help slimmers keep weight off, study finds

Low-carb diets are the best option for slimmers to keep weight off by increasing the number of calories burned, a new study says.

Researchers saw that people who eat more salads and lean protein also have lower levels of a hormone that increases appetite.

Past studies have shown that as you lose weight you start to burn fewer calories because the body’s metabolism slows, which is what makes it so hard to budge that last pound and keep it off for good. 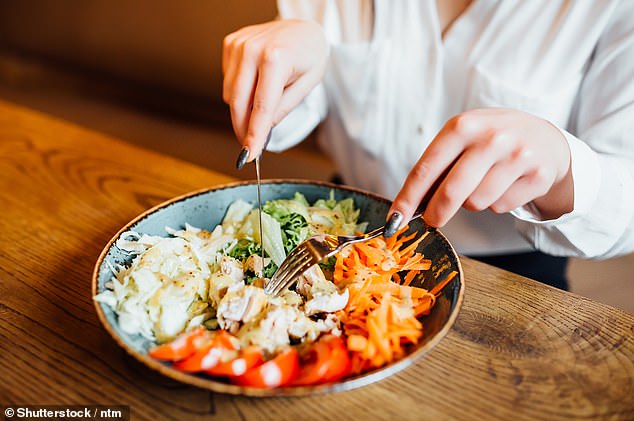 For the study, published in The BMJ, the team enrolled 234 overweight adults between ages 18 and 65 with a body mass index of 25 or higher.

The participants went on an initial weight-loss diet for 10 weeks. Of the initial group, 164 achieved the target weight loss of at least 10 percent of their body weight and moved on to the maintenance phase.

The team then analyzed the adults’ weight and energy expenditure to measure how the different groups burned calories at the same weight.

They found that, over the study period, total energy expenditure was ‘significantly greater’ in those on the low-carb diet than the high-carb diet.

Researchers also measured the patients’ secretion of insulin, a hormone that prevents blood sugar level from getting too high, at the study’s start.

Those who had the highest insulin secretion at the beginning of the study burned up to 478 kilocalories per day more on a low-carb diet.

The team believes this is due to a theory known as the carbohydrate-insulin model, which suggests that carbs that have a high glycemic load raise blood sugar levels quicker – increasing hunger and make people more likely to gain weight.

Additionally, the researchers found that levels of ghrelin, a hormone that increases appetite, was significantly lower on the low-carb diet compared to the high-carb diet.

‘If this difference persists, the effect would translate into about a 20-pound weight loss after three years, with no change in calorie intake,’ said co-lead author Dr Cara Ebbeling, associate director of the New Balance Foundation Obesity Prevention Center at Boston Children’s Hospital.

The researchers say there might be unmeasured factors that contributed to the number of calories burned, but they believe their trial shows that diet affects energy expenditure.

‘Our observations challenge the belief that all calories are the same to the body,’ said Dr Ebbeling.

‘Our study did not measure hunger and satiety, but other studies suggest that low-carb diets also decrease hunger, which could help with weight loss in the long term.’