Home » Health News » Man, 67, has his arm RESEWN after he accidentally cut it off

Man, 67, has his arm RESEWN after he accidentally cut it off

Man, 67, has his arm RESEWN after he accidentally cut it off while operating heavy machinery at work – and he can still use his hand

A man had his arm resewn back on after he accidentally cut it off.

The unnamed 67-year-old was operating heavy machinery at work when he severed his right forearm.

After being airlifted for emergency surgery, doctors at Shonan Kamakura General Hospital, Japan, managed to reattach his limb by fusing his blood vessels and taking a ‘muscle graft’ from his back.

Just four weeks later, he was able to bend his elbow again and partially regained the use of his hand ten months on. 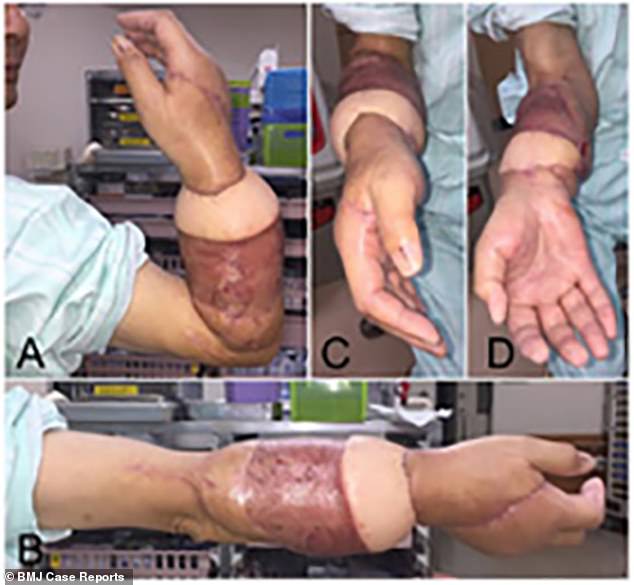 The unnamed man’s arm is pictured after it was ‘replanted’ using a ‘muscle graft’ from his back. Images C and D show the range of movement he regained in his hand ten months on

The patient was flown to Shonan Kamakura – around half-an-hour’s drive from Tokyo and 70km from the place of the accident – after initially presenting to a local hospital.

He was immediately taken to an operating room, with surgery, led by Dr Naoki Yoshida, starting one hour and 54 minutes after the accident occurred.

With his crushed amputated limb in tow, surgeons first set about removing metal fragments from the arm, BMJ Case Reports revealed. They then stabilised it via metal plates and rods in a procedure known as osteosynthesis.

A second operation, called vascular anastomosis, reconnected his severed blood vessels. This was followed by further surgeries to restructure his damaged nerves, muscles and tendons.

The man then had negative pressure wound therapy (NWPT) applied to his skin and soft tissue. NPWT ensures the wound has a lower pressure than the area around it, which increases blood flow and removes excess fluids to aid healing. 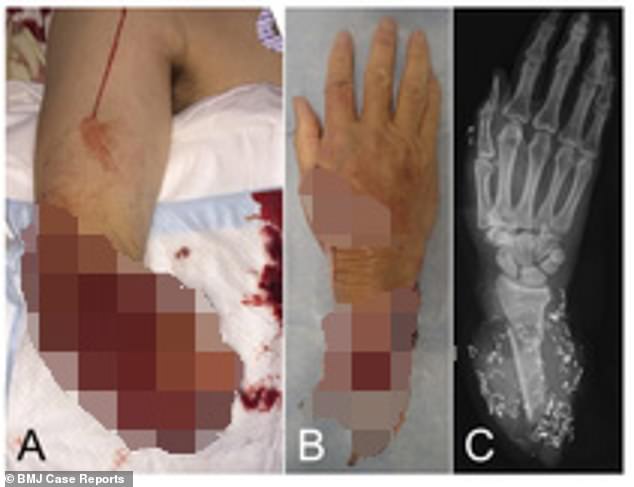 Images A and B show the man’s amputation, with his hand being completely severed. X-ray C reveals the number of metal fragments near the wrist, which had to removed before surgery

Four days later, the man’s skin and soft tissue was reconstructed from his latissimus dorsi muscle flap. This runs from beneath the armpit of the right shoulder to the lower back and is the largest muscle in the body at up to 20x40cm.

It is also less than 1cm thick, which allows it to be draped over irregular surfaces.

The remaining wound was covered with a split-thickness skin graft, which can be taken from anywhere in the body and includes two layers of skin. Once the surgeries were deemed a success, the NWPT was removed, 19 days after it had been applied.

Following rehabilitation, the man regained the ability to use his elbow within just one month, with him then being transferred to a specialist hospital.

Ten months on, his arm, hand and shoulder disability score was 67 out of 100, which the patient was happy with despite him not recovering total movement.

This score is determined via a patient questionnaire that asks how easily they can do everyday tasks such as opening a tight jar, changing a lightbulb or using cutlery, as well as measuring pain.

Dr Yoshida wrote in the case report: ‘Limb amputation causes not only loss of physical integrity but also affects an individual’s mental and social wellbeing and is a significant problem, especially for younger people and the working population.’

Following accidental amputation, limbs can typically be replanted in 77-to-93 per cent of cases, depending on the severity of the damage. Many patients go on to find their functionality ‘satisfactory’ even if reduced.

Replanting is considered ‘superior’ to prosthetics, which can be rejected by patients despite significant progress in their technology, the report adds.