Man is forced to have his leg amputated after developing cancer

Man, 20, is forced to have his leg amputated after developing cancer that doctors ‘dismissed for THREE years’

A man’s leg had to be amputated when it broke under the weight of a massive cancerous tumour – three years after he first complained about the pain.

Matthew King, 20, said his life was made a misery by the constant agony, which began in 2014 and left him unable to sleep through the night.

He visited his doctors on five separate occasions, but they dismissed his concerns as muscle pain.

Eventually, after breaking his right leg in March 2017, medics discovered the orange-sized growth which was so heavy it caused his femur to snap. 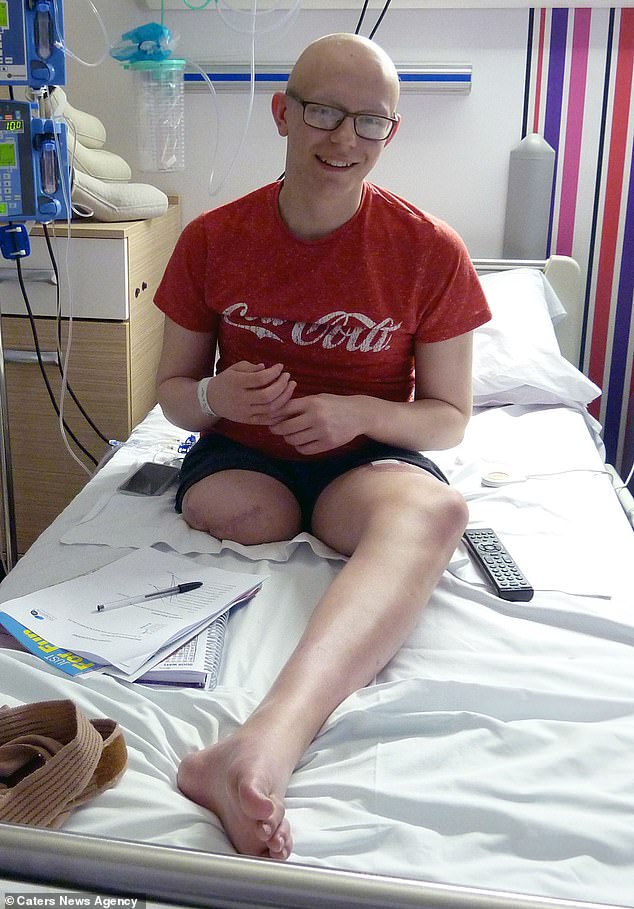 Still standing: Matthew King, 20, from North Yorkshire, had his right leg removed in August 2017 after doctors finally found a huge cancerous growth which had been causing him agony

Mr King, from Appleton Wiske, North Yorkshire, was rushed to Darlington Memorial Hospital, where he was diagnosed with Ewing Sarcoma –  rare form of cancer that typically affects young men .

‘My diagnosis didn’t really hit at first,’ he added. ‘The doctors realised the tumour was three times the size of a normal tumour.

‘When you’re told something like that, you can’t really register it.’

Mr King then began a course of chemotherapy, culminating in the amputation of his right leg in August 2018 in a 14-hour-long operation.

He then spent five months learning how to walk again with a prosthetic leg.

‘When the doctors told me that I needed the amputation, I wasn’t scared. But after the operation I kept getting phantom sensations,’ he said.

‘Learning to walk took a bit of time, I had to learn how to walk on parallel bars and it took me five months.’ 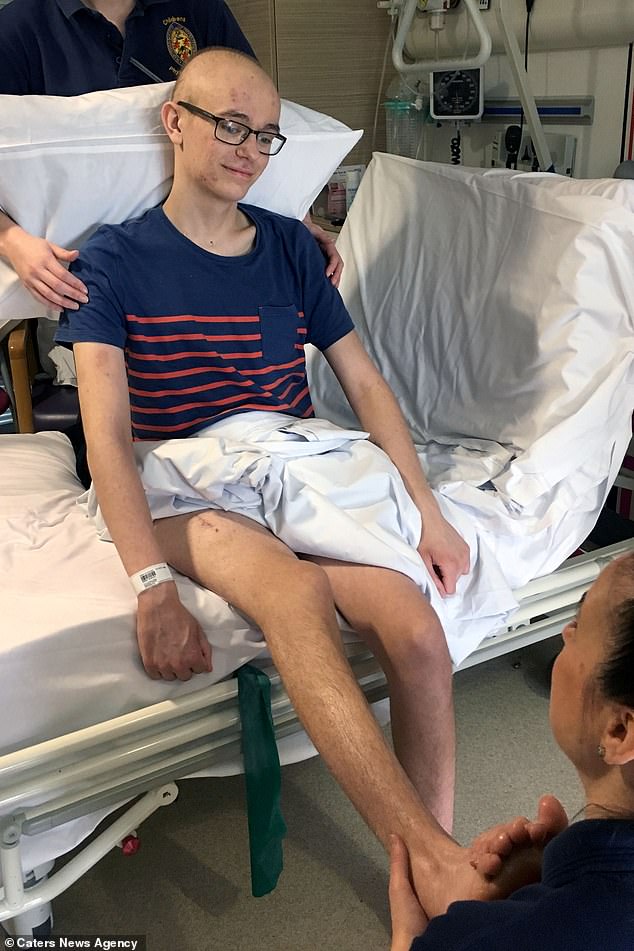 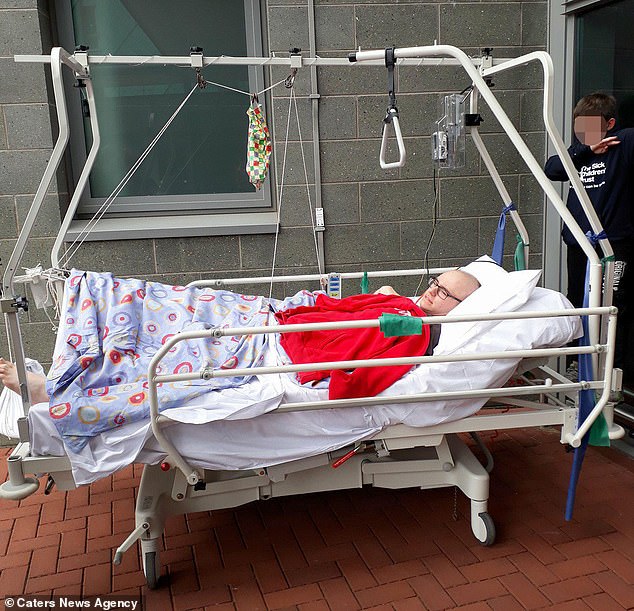 Strength: Mr King pictured in his hospital bed shortly before beginning a course of chemo

Naturally, he believes that if doctors had not dismissed his concerns then he would still have all of his limbs today.

‘For years I had excruciating pain. I’d spend nights after school lying awake in pain,’ he added. ‘Often it was so bad I couldn’t get off the sofa and I’d cry through the night because the pain was so intense.

‘It was like having a dagger driven into my leg but the feeling lingered all day. It made my life a misery. I couldn’t do the things I liked such as football, cycling and running.

‘It was frustrating because we asked doctors if they could set up some scans so that they could be certain and they kept on saying that it wasn’t needed.

‘I was only 18. I kept asking “why is this happening to me?”. You never think it’ll happen to you but it just happened.

‘The chemo was really bad. I couldn’t really eat and I got really, really tired and even got a kidney infection. I felt like garbage all the time.’ 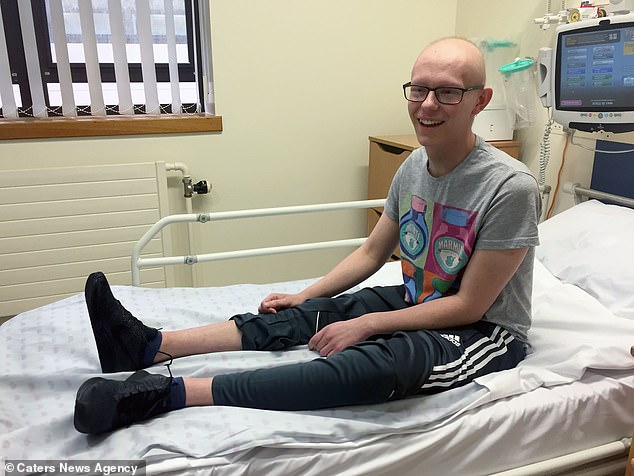 Smiling through it: ‘I was only 18. I kept asking “why is this happening to me?”. You never think it’ll happen to you but it just happened,’ he said 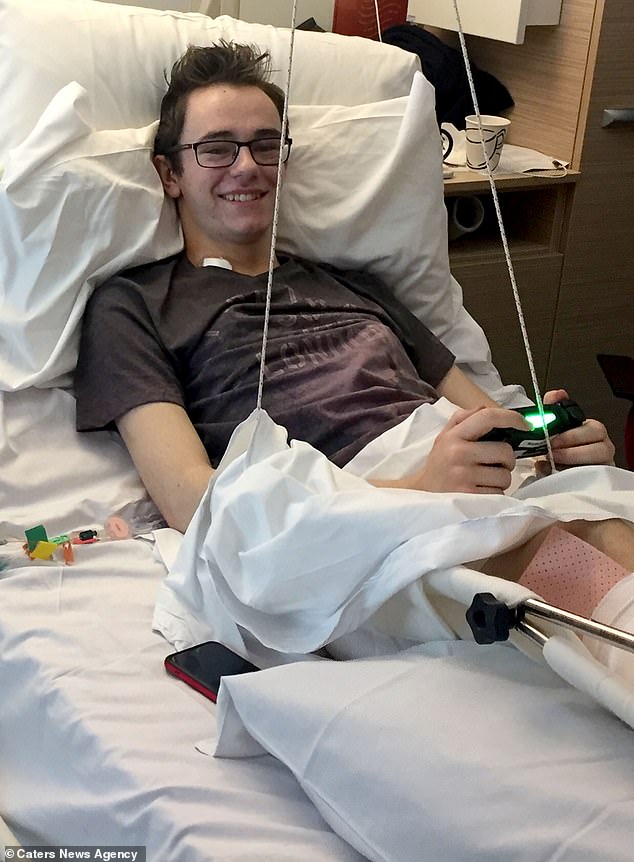 Looking on the bright side: He said his experience has given him a unique outlook on life and that he’s proud of his prosthetic.

WHAT IS EWING SARCOMA?

Ewing sarcoma is a rare type of cancer that affects bones or the tissue around bones.

It mainly affects children and young people, with most cases diagnosed in people aged 10 to 20. It’s more common in males than females.

Ewing sarcoma can spread to other parts of the body quite quickly. The earlier it’s diagnosed, the better the chance there is of the treatment being successful.

It can be cured in some cases, but this might not be possible if the cancer has spread.

The cancer can also come back after treatment, so regular check-ups will be offered to look for any signs of this.

Overall, more than half of people with Ewing sarcoma live at least five years after being diagnosed, but this can vary quite a lot.

Now, Mr King is currently taking a year out to recover but is hoping to study either English Literature or History at university while he gets to grips with life on one leg.

He said his experience has given him a unique outlook on life and that he’s proud of his prosthetic.

‘I want to make the most of life. I don’t get many comments from people about the prosthetic.

‘I don’t know how girls find it when they see me, I suppose I’ll find out. I think it’s something I’ll have to say upfront to people. There’s no point trying to hide it. I’m proud of it and it’s part of me and what I’ve been through.

‘What’s happened to me has made me look at life differently. I want to live life because now I know that anything can happen at any moment.’

They said: ‘We are unable to comment on individual cases.’

Matthew is raising money for a new prosthetic leg. To donate, visit his Go Fund Me site by clicking here.