Mice treated with THC, the psychoactive compound found in weed, saw a 20 percent reduction in the brain plaques associated with Alzheimer’s.

Those animals also showed behavioral signs that their memories were better than those of mice with Alzheimer’s that were not treated with THC in preliminary results of a German study presented at the Society for Neuroscience conference this week.

Paradoxically, marijuana actually impairs memory and learning in animals (and people) that do not have the debilitating memory-loss disease. 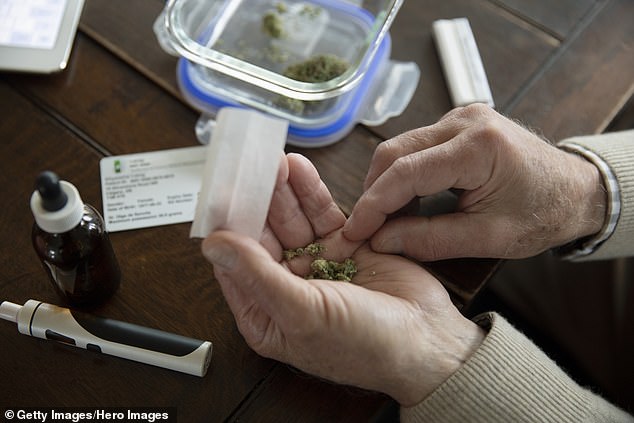 The active ingredient in marijuana, THC, impairs memory and learning in healthy brains but may combat the development of Alzheimer’s plaques and protect cognition in diseased brains

Now that marijuana is legal for medical or recreational use in more than half of US states, the drug is not only being used by studied more widely.

Historically, it has been seen by some as a healing herb, and to others as a damaging drug.

So far, our scientific study of marijuana’s effects has shown that they are as split (but not nearly as extreme) as older, less evidence-based opinions of it.

Cannabis really can alleviate pain – but it’s not a cure.

And it really can create feelings of paranoia and anxiety – but they are not permanent.

Now, new research suggests marijuana may be bad for the memory a most – but good for the memories of those with the worst dementia.

A new study in mice suggests that THC – the same ingredient that gives users the ‘high’ feeling and inhibits learning and memory – may reduce the effects of Alzheimer’s disease.

Dr Yvonne Bouter and her team at the University Medical Center Goettingen in Germany started treating a group of mice with THC for six weeks.

Both that group and the study’s control group were bred to develop Alzheimer’s.

And they did – but the disease did markedly less damage to the brains of the mice treated with THC.

Alzheimer’s is marked by memory impairment and confusion, in terms of behavior.

Physiologically, a substance called amyloid beta builds up on the brains of Alzheimer’s sufferers overtime. These so-called plaques are thought to interfere with the function of brain cells and are considered the classic signal of the disease.

Scientists have also noted that Alzheimer’s sufferers lose brain mass, and think that chronic inflammation may contribute to the development of dementia.

By all of these measures, the THC-taking mice were in better shape.

The mice that got THC also performed better on tests of their memories.

Success in these experiments suggests that marijuana may be useful for treating Alzheimer’s in humans.

But we have little idea how the therapy works.

It isn’t the first study to link THC and Alzheimer’s however.

A 2014 study suggests that the brain’s system of receptors for cannabis – the endocannabinoid system – may play a role in Alzheimer’s.

A key substance in the development of Alzheimer’s plaque is called A-beta, but it hasn’t always been clear exactly how it was damaging the brain’s memory networks.

Following their 2014 study, the Stanford researchers didn’t think that THC or marijuana held much promise for treating Alzheimer’s.

They said that marijuana ‘floods’ the endocannabinoid system with THC, meaning it doesn’t know what to pay attention to, whereas the tiny, quick bursts the brain gets from endocannabinoid receptors keep the mind focused on important information.

‘Endocannabinoids in the brain are very transient and act only when important inputs come in,’ said Dr Daniel Madison, author of the 2014 study, in a statement.

‘Exposure to marijuana over minutes or hours is different: more like enhancing everything indiscriminately, so you lose the filtering effect. It’s like listening to five radio stations at once.’

It is unclear what dose of THC the German scientists gave to the mice they studied, but it may shed light on how marijuana can be maneuvered to improve Alzheimer’s symptoms.