Home » Health News » Masks Off, Mahi Mahi On. Restaurant Workers Are in a Race for Vaccines

Masks Off, Mahi Mahi On. Restaurant Workers Are in a Race for Vaccines

As states open vaccines and restaurants to all, wait staff and food service workers are often left behind. Some chefs have even opened pop-up spots to get their employees shots more quickly. 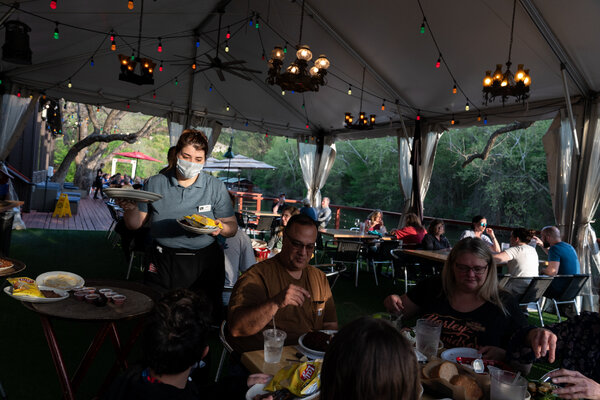 Over the course of the pandemic, some of the most dangerous activities were those many Americans dearly missed: scarfing up nachos, canoodling with a date or yelling sports scores at a group of friends at a crowded, sticky bar inside a restaurant.

Now, as more states loosen restrictions on indoor dining and expand access to vaccines, restaurant employees — who have morphed from cheerful facilitators of everyone’s fun to embattled frontline workers — are scrambling to protect themselves against the new slosh of business.

“It’s been really stressful,” said Julia Piscioniere, a server at Butcher & Bee in Charleston. “People are OK with masks, but it is not like it was before. I think people take restaurants and their workers for granted. It’s taken a toll.”

The return to economic vitality in the United States is led by places to eat and drink, which also suffered among the highest losses in the last year. Balancing the financial benefits of a return to regular hours with worker safety, particularly in states where theoretical vaccine access outstrips actual supply, is the industry’s latest hurdle.

In many states, workers are still unable to get shots, especially in regions where they were not included in priority groups this spring. Immigrants, who make up a large segment of the restaurant work force, are often fearful of signing up, worrying that the process will legally entangle them.

Some states have dropped mask mandates and capacity limits inside establishments — which the Centers for Disease Control and Prevention still deem a potentially risky setting — further endangering employees.

“It is critical for food and beverage workers to have access to the vaccine, especially as patrons who come have no guarantee that they will be vaccinated and obviously will not be masked when eating or drinking,” said Dr. Alex Jahangir, the chairman of a coronavirus task force in Nashville. “This has been a major concern for me as we balance the competing interests of vaccinating everyone as soon as possible before more and more restrictions are lifted.”