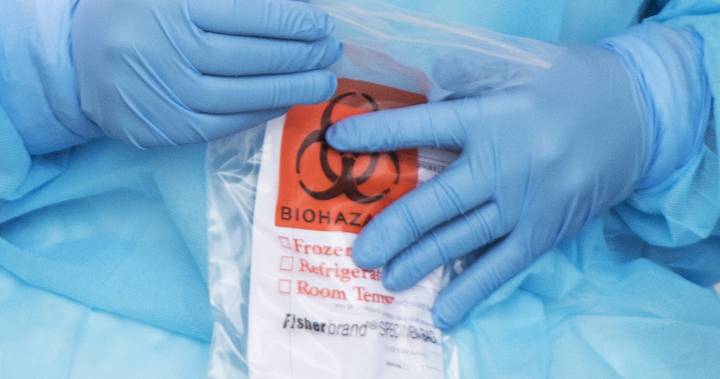 Health officials in London and Middlesex on Thursday confirmed 13 new cases of COVID-19 along with one more resolved case, while Lambton, Oxford and Perth counties all confirmed new cases, including two at an area long-term care home.

Details about the 13 new cases, including the age, gender, source of transmission and current status of each patient, were not immediately available from the Middlesex-London Health Unit (MLHU).

The health unit has changed how it reports new cases publicly. Instead of releasing individual case details, a daily aggregate tally is now being provided.

Fourteen new cases were confirmed in the area on Wednesday — an increase health officials have attributed to the clearing of testing backlogs.

Thursday’s update brings the total number of confirmed cases in London and Middlesex to 79, including nine resolved cases and three deaths.

Two deaths were reported on Tuesday and one over the weekend.

The area’s first death involved a man in his 70s who tested positive on March 19 and who became infected during travel to Portugal.

As of Thursday, 18 COVID-19 patients were being treated by London Health Sciences Centre (LHSC): 10 at University Hospital and eight at Victoria Hospital. Five patients at each hospital are in intensive care, according to LHSC.

A Bobcaygeon nursing home also reported two more deaths of residents in a COVID-19 outbreak there, bringing the total to 16.

In London, officials with Grand Wood Park reported Tuesday that two residents of the home had tested positive for COVID-19 the day before. No further details were provided, but Grand Wood said the two were in self-isolation.

Nationally, more than 10,100 cases had been confirmed across the country as of late Thursday morning, including 1,670 resolved cases and 127 deaths.

Officials with Southwestern Public Health (SWPH) reported three new confirmed cases of COVID-19 in Oxford County on Wednesday, bringing the county’s total to seven and the total number in SWPH’s jurisdiction to 18.

The agency covers Elgin and Oxford counties and St. Thomas.

Of the seven cases reported in Oxford, two have been resolved and one is in hospital

The new cases involve one woman in her 30s who is self-isolating and two women in their 50s, one of whom is self-isolating. The status of the third was not available, and transmission source information was pending for all three.

No new cases were reported in Elgin County, which has seen 11 cases confirmed so far, including one from St. Thomas, along with two deaths — the only deaths recorded so far by SWPH.

According to health officials, 371 COVID-19 tests have been conducted in Elgin and Oxford counties as of Thursday morning, with 117 awaiting results.

On Wednesday, 62 physicians and nurse practitioners from Oxford County signed a joint letter pleading for residents in the county to follow health guidelines and stay home.

“We now have community spread of the virus within southwestern Ontario, and time is of the essence for implementing changes to ‘flatten the curve’ before this pandemic overwhelms our health-care system,” the letter states.

Questions about COVID-19? Here are some things you need to know:

Health officials caution against all international travel. Returning travellers are legally obligated to self-isolate for 14 days, beginning March 26, in case they develop symptoms and to prevent spreading the virus to others. Some provinces and territories have also implemented additional recommendations or enforcement measures to ensure those returning to the area self-isolate.

Symptoms can include fever, cough and difficulty breathing — very similar to a cold or flu. Some people can develop a more severe illness. People most at risk of this include older adults and people with severe chronic medical conditions like heart, lung or kidney disease. If you develop symptoms, contact public health authorities.

To prevent the virus from spreading, experts recommend frequent handwashing and coughing into your sleeve. They also recommend minimizing contact with others, staying home as much as possible and maintaining a distance of two metres from other people if you go out.