Four out of five women at high risk of breast cancer do not want to take daily pill to prevent the disease because they are scared of weight gain, hot flushes and tiredness side effects

Most women at a high risk of breast cancer don’t want to take the preventative drug, tamoxifen, over fears of its side effects.

The once-a-day pill is proven to cut the risk of developing the disease – but it can cause hot flushes, irregular periods, tiredness, weight gain or hair thinning.

Experts believe tamoxifen could help around 500,000 women in the UK but say the fear of side effects is putting them off.

Just 15 per cent of high-risk women in a survey said they were taking the drug, whereas nearly three quarters of them were worried about its long-term effects. 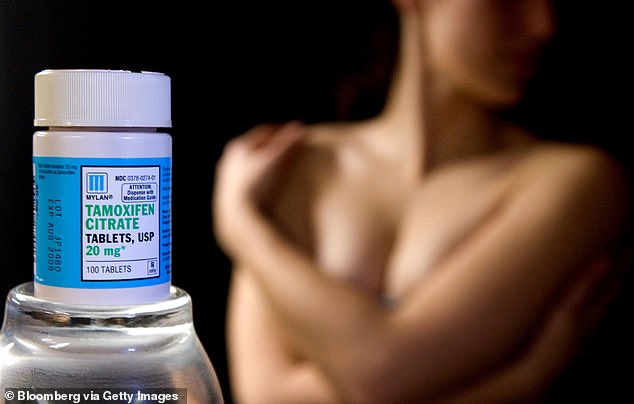 Breast cancer is the most common cancer in the UK and affects more than 50,000 women a year – tamoxifen is known to help prevent the disease but many women do not take it because they’re worried about side effects such as headaches, weight gain, and muscle pain

A survey by the University of Leeds asked more than 400 women at high risk of the cancer about their views on tamoxifen.

It found 72 per cent of them were worried about the long-term impact of the drug, and 57 per cent believed it would cause unpleasant side effects.

The drug is known to cause potentially serious side effects, including vaginal dryness, loss of sex drive, nausea, eye problems, headaches, muscle pain and cramps, skin rashes or mood changes.

It works by reducing the production of the female sex hormone, oestrogen, which many breast cancers rely on in order to grow.

Changing the body’s balance of hormones in this way can cause the symptoms with which tamoxifen is associated.

Almost a quarter of people will not survive for another 10 years after their diagnosis.

‘Some beliefs about the use of medicine were very negative,’ said the study’s lead researcher Dr Samuel Smith.

Tamoxifen is a hormonal treatment drug which is usually taken in pill form once a day, but can also be in syrup form.

The medicine is given to people with breast cancer or at risk of developing it because it blocks oestrogen, the female sex hormone, from travelling to cancer cells.

Most breast cancers feed off oestrogen so interrupting this process can slow down or even stop the growth of a tumour.

The pill can be used as a treatment, to reduce a tumour before surgery, to prevent it coming back after surgery, or as a preventative treatment to stop cancer developing in the first place.

As a preventative treatment the medicine is usually offered to women who have not yet been through the menopause and are at high risk of breast cancer because it runs in their family.

But tamoxifen can cause some unpleasant – and occasionally serious – side effects.

‘This appears to be putting some women off tamoxifen, despite its proven ability to help prevent breast cancer in the long term.

‘We need to make sure health care professionals are adequately equipped to discuss the potential benefits and harms of preventive treatment with their patients so that women are well informed before deciding whether or not to take a drug.’

In a survey done on a smaller 250-member section of the original group the researchers found just 15 per cent of women were taking tamoxifen.

The 6p-a-day pill can be used as a breast cancer treatment, to stop it returning after surgery, to shrink a tumour before surgery, or to try and prevent tumours.

As a preventative treatment tamoxifen is usually offered to women who have not been through the menopause and are at high risk of breast cancer because it runs in their family.

When questioned about medicines more generally, 29 per cent of the women thought doctors prescribed too many drugs.

Nearly a quarter of the participants (24 per cent) said they had had bad reactions to medications in the past, and the same proportion said people should take regular breaks from drugs.

Some 17 per cent of the group thought natural remedies would be safer than prescription medicines.

Cancer Research UK’s head of health information, Dr Julie Sharp, said: ‘It’s understandable that women considering taking a new medicine might have some concerns and that, for some, it won’t be the right option.

‘There are some potential side effects with tamoxifen, and other medications that can help prevent cancer, but it’s vital that they have all the information, so they can make the best choice for them.’

The research was published in the journal Clinical Breast Cancer.