Home » Health News » Mother, 47, lost half her face to a flesh-eating bacteria

Mother, 47, lost half her face to a flesh-eating bacteria

Mother, 47, who lost half her face to a flesh-eating bacteria and was forced to have a skin graft from her thigh can finally look at herself in the mirror after surgeons rebuild her cheekbone

A mother-of-four who lost half her face to a flesh-eating bacteria and was forced to have a skin graft from her thigh can finally face her own reflection after surgeons cut away her excess tissue.

After a fall initially left Ms Corden with just a small scratch, within 24 hours her skin had turned back, her kidneys failed and she stopped breathing.

Doctors were forced to cut away half the tissue on her face to prevent the deadly infection spreading to her brain.

Ms Corden then spent four days in a coma fighting for her life, before enduring 11-hour surgery where medics took tissue from her thigh and transplanted it on to her hollowed-out face.

After feeling too ashamed to leave the house, Ms Corden, from Leeds, is finally getting her confidence back after surgeons have started to remove excess fatty tissue from her cheek. 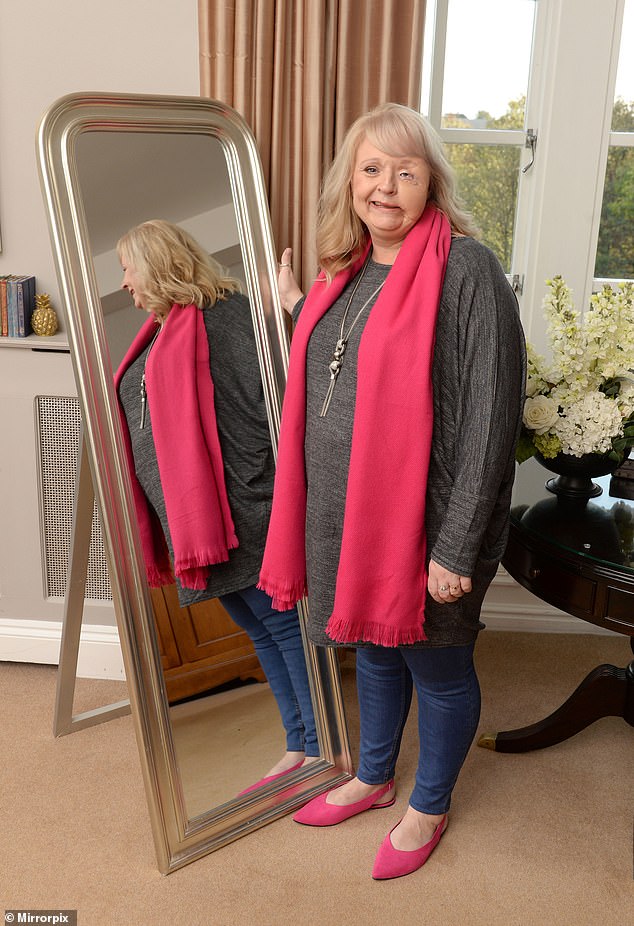 Donna Corden lost half her face to a flesh-eating bacteria and was forced to have a skin graft from her thigh after she fell and hit her eyebrow last January. After feeling like a ‘freak’ and covering mirrors, she can finally face her reflection after surgeons cut away her excess tissue 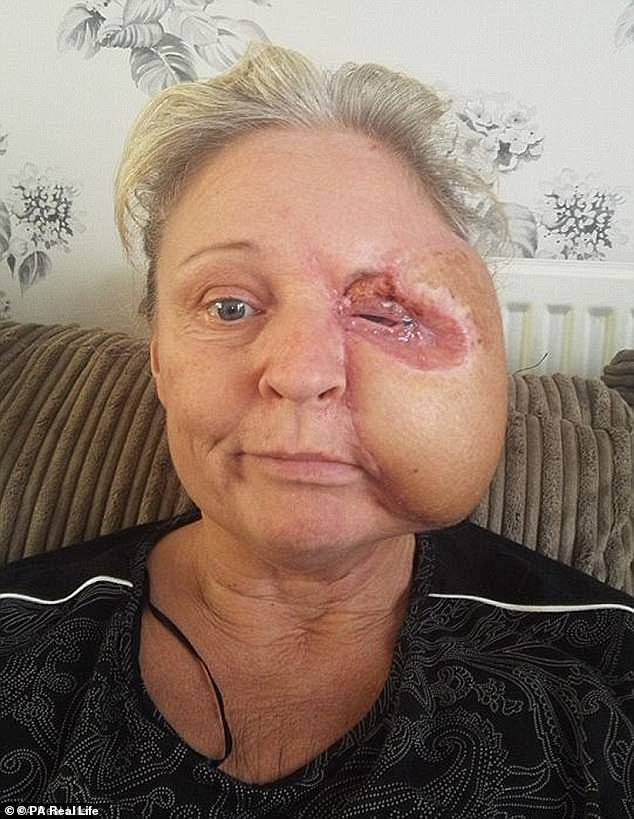 Ms Corden claimed she looked like ‘Frankenstein’s monster’ when doctors took tissue from her thigh and transplanted it onto her face (pictured after the procedure). She had developed the deadly infection necrotising fasciitis, which was threatening to spread to her brain 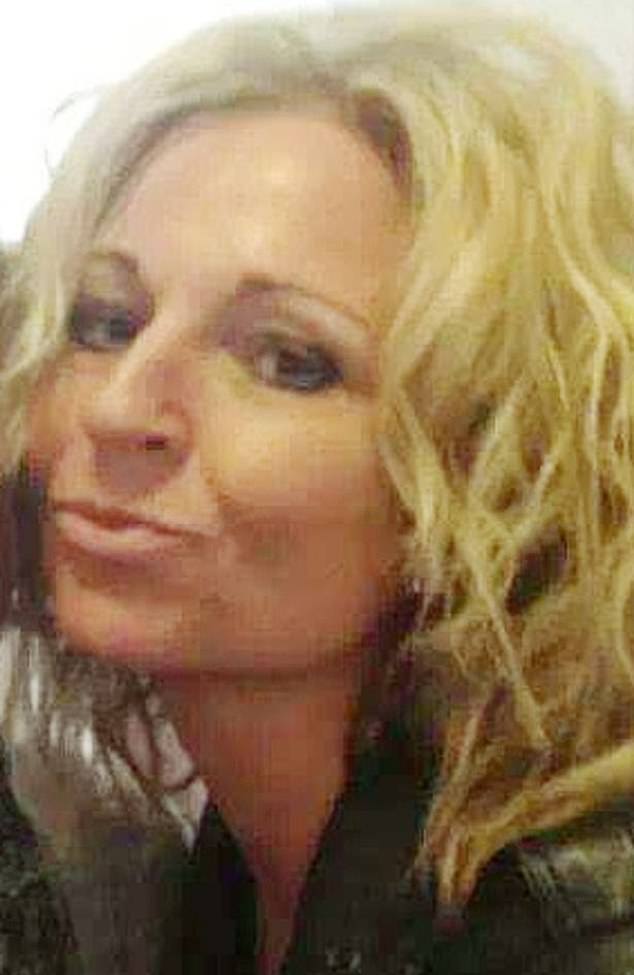 Pictured before the ordeal, Ms Corden’s legs gave way in her kitchen as a result of her arthritis, which caused her to fall and hit herself on the oven. She initially suffered just a small scratch, however, within 24 hours her skin turned black and she stopped being able to breathe

After being rushed to St James Hospital, Ms Corden was only diagnosed with NF because one of the doctors had recently studied it during their medical training and flagged up the symptoms.

Once the formal NF diagnosis was made by the hospital’s eye specialist, she was whisked to Leeds General Infirmary for an emergency operation.

Surgeons told her children to ‘prepare for the worst’ but managed to save Ms Corden’s life by cutting away the rotten flesh.

But, just days later, she developed sepsis and her life once again hung in the balance.

Necrotising fasciitis, more commonly known as ‘flesh-eating disease’, is a rare but extremely vicious bacterial infection. ‘Necrotising’ refers to something that causes body tissue to die, and the infection can destroy skin, muscles and fat.

The disease develops when the bacteria enters the body, often through a minor cut or scrape. As the bacteria multiply, they release toxins that kill tissue and cut off blood flow to the area.

Because it is so virulent, the bacteria spreads rapidly throughout the body.

Sufferers must be treated immediately to prevent death, and are usually given powerful antibiotics and surgery to remove dead tissue. Amputation can become necessary if the disease spreads through an arm or leg.

Patients may undergo skin grafts after the infection has cleared up, to help the healing process or for aesthetic reasons.

Her body then went into organ failure and she was placed in an induced coma, while being pumped full of antibiotics.

‘My chances of surviving were very, very slim. It was an absolute nightmare’, Ms Corden said.

Waking from her coma to find herself in intensive care, she asked a nurse to pass her a mirror and instantly burst into tears upon seeing her reflection.

‘I looked like Frankenstein’s monster,’ Ms Corden told The Mirror.

‘I was like something you’d see at Halloween with this great big distorted head.’

After being discharged on February 10, Ms Corden vowed to never leave the house again and only ventured outside for vital hospital appointments.

She even covered up a mirror in her bedroom so she would not have to see herself.

But since having the ‘debulking’ surgery, Ms Corden claims her face has reduced in size by half.

Although thrilled with the results, she is running out of surgical options on the NHS and may soon be forced to resort to expensive cosmetic procedures to re-build her face.

NHS surgeons have told Ms Corden they are not prepared to cut away anymore excess fat or perform skin grafts due to the risk of infections.

She has already received free-of-charge laser therapy from her friend Lindsey Macenroe, who runs a skin clinic in Leeds and has also launched a fundraising campaign to raise the £30,000 Ms Corden needs for private treatment.

Ms Corden hopes medics will be able to rebuild her eyeball and cheekbone, which are drooping, as well as tattoo her face so it is all the same colour. 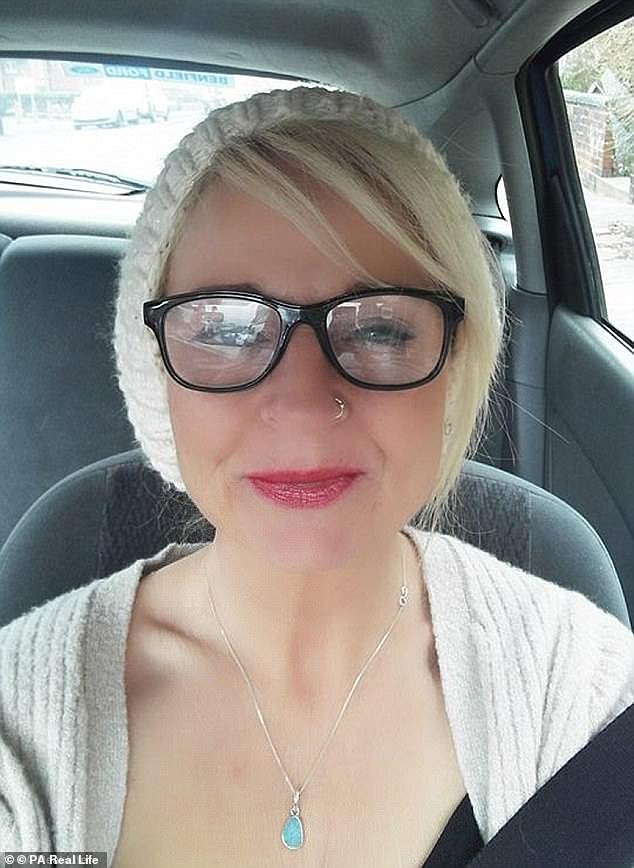 Pictured before the fall, Ms Corden spent four days in a coma fighting for her life, before enduring 11-hour surgery where medics took tissue from her thigh to her cheekbone. Upon seeing her new face, she instantly burst into tears and vowed never to leave the house