Home » Health News » ‘Not making the connection’: What it’s like for Parkinson’s patients with frozen gait 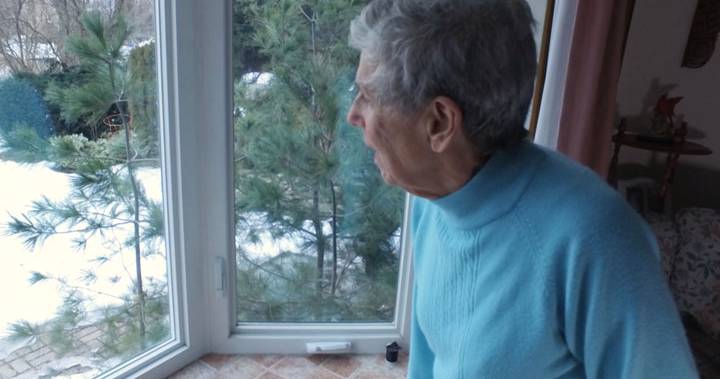 ‘Not making the connection’: What it’s like for Parkinson’s patients with frozen gait

Marg Turner has been living with Parkinson’s disease for 25 years.

“Not an anniversary you hope to celebrate,” said the 83-year-old from Toronto. Starting about 10 years ago, she had trouble getting around.

“I was into hiking, I was into lawn bowling, I rode my bike. But then I became aware that when I wanted to move, I couldn’t.”

She likens it to a lamp that’s unplugged — she wants to move, her brain is thinking about moving, but her feet stay right where they are.

“It’s as if they’re nailed to the floor,” she said.

This can last a few seconds or up to a minute before she’s able to get going again. It’s a real problem when she needs to get on an elevator or cross a busy street.

This is known as “freezing” or “frozen gait,” and it’s a common symptom for people living with Parkinson’s that usually occurs in the later stages of the disease, according to Parkinson Canada.

“Freezing can be a really, really distressing symptom for people living with Parkinson’s,” said Maria Marano of Parkinson Canada.

“Let’s say I wanted to go get a coffee. I would probably just get up and go, whereas a person who is experiencing Parkinson’s, their brains aren’t working as automatically, so they would have to think of each step.”

Freezing is not just frustrating, it can be dangerous, too.

Caroline Paquette, an assistant professor of kinesiology and physical education at McGill University, has been studying freezing in her lab, examining the brains of people who experience frozen gait.

She’s found that people who experience freezing tend to use their cognitive areas while walking much more than people with Parkinson’s who don’t freeze.

“That’s one of the leading hypotheses: that walking becomes much less automatic and people use more cognitive circuits,” she said.

As walking becomes more of a conscious activity, it impedes a patient’s motor skills, she said.

This happens because Parkinson’s, a degenerative disease, slowly damages the parts of the brain that are usually used to walk, she said, so other parts of the brain pitch in to compensate. The cognitive areas just don’t produce the same kind of automatic motion.

Turner finds that she needs to think hard about each movement to restart when she’s frozen. Many people with Parkinson’s use cues to help themselves get going, things like stepping over a cane, or a laser to point where they should go.

She has a mantra.

To get around, Turner recites “step, lift, step, lift” with every step.

“I think that’s helping get the message across that gap,” she said.

Paquette is hoping that her research leads to better treatments for freezing. The first step is what she’s currently working on — figuring out exactly what’s going on in people’s brains as they freeze.

Once she has that, Paquette wants to use magnetic stimulation to help stimulate the under-used parts of the brain, training it to pick a circuit that’s better for walking. The technique will tell the brain, “this is the circuit that you should be using for that type of exercise,” Paquette explained.

Paquette has been awarded a grant from Parkinson Canada for her project.

For now, Turner tells people with Parkinson’s not to give up hope if they freeze, saying they will find something that works for them.

“Eventually, you will move,” she said.

Listen to the podcast “When life gives you Parkinson’s” on iTunes.