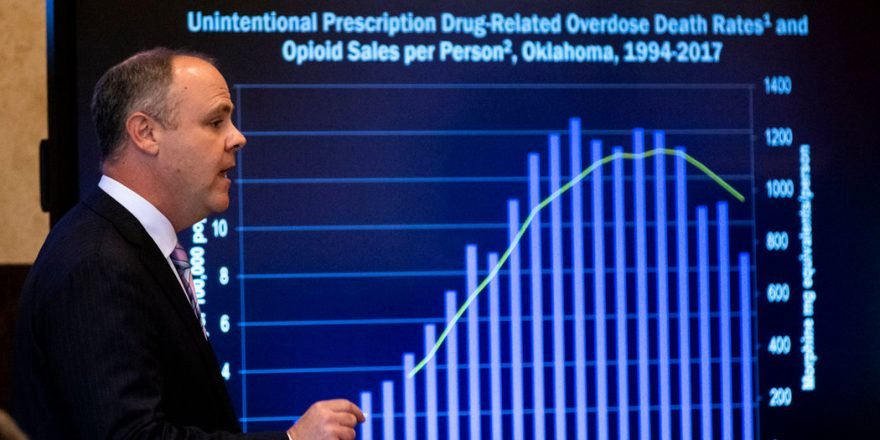 Opening statements in the country’s first trial over whether a pharmaceutical company is liable for the opioid crisis began as a battle between fire and ice: Lawyers for Oklahoma, a state brought to its knees by addiction and overdose deaths, heatedly accused Johnson & Johnson of creating a deadly demand for the drugs, while the company coolly responded that it had acted responsibly and lawfully in its quest to offer relief to chronic pain patients.

The trial, heard by a judge without a jury but livestreamed to the public, is being closely watched not only by those affected by prescription opioid addiction, but also by lawyers in almost 1,900 similar federal and state cases nationwide. Two other defendants who manufacture opioids settled with Oklahoma — Purdue Pharma will pay $270 million, Teva Pharmaceuticals, $85 million — leaving only J & J on trial.

The state directly confronted what many legal experts have predicted will be the highest hurdle in the case: connecting one manufacturer of opioids to the cascading harms wrought by the entire industry.

J & J pushed back hard, arguing that the state itself looked the other way as its own drug review board and prescription monitoring program for years neglected to swoop down on sources of diverted opioids. In addition, it said, Oklahoma could not tie any death directly to the company’s products — Duragesic, a fentanyl patch, and Nucynta, an opioid pill it no longer makes.

Indeed both sides introduced what are sure to be their signature earworms, themes that will be echoed throughout the trial, estimated to take about two months.

“If you oversupply, people will die,” said Brad Beckworth, who represents the Oklahoma attorney general’s office. He repeated the phrase to drive home the state’s argument that J & J sent squads of salespeople to persuade physicians of the broad utility of its fentanyl patch, indicated specifically for cancer breakthrough pain.

In doing so, said Mr. Beckworth, J & J convinced doctors to “start with and stay with” medications intended only as a last resort.

Through greed and deceptive marketing practices, he said, J & J aggressively competed with Purdue Pharma, which used a similar approach for OxyContin. And he quoted the lyrics of what he said was his sister’s favorite song from the musical “Annie Get Your Gun”: “Anything You Can Do (I Can Do Better).” 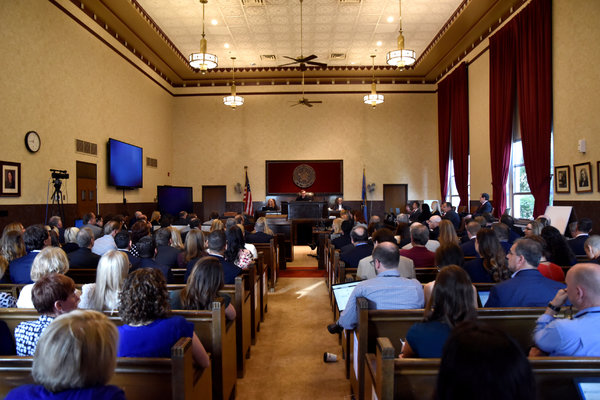 In getting around what J & J raised as a defense — that its market share of the drugs was minuscule — Mr. Beckworth cited the company’s promotional materials, which praised the benefits of opioids generally. Essentially, he was arguing that a rising tide floats all boats: By presenting opioids as safe and useful, J & J was liable for the harms created by all brands, not just its own.

“Everywhere in the decision tree about prescribing or taking an opioid,” Mr. Beckworth said, “J & J was there first.”

Another significant hurdle for the state is its legal theory: that J & J created a “public nuisance,” which it will have to abate. Legal experts have said such a tactic is risky. A lawyer for the state, Mike Burrage, argued that Oklahoma’s public nuisance law includes interference with the public’s health and safety rights. As for J & J’s assertion that such laws typically cover property, Mr. Burrage said that the harm accrued from the company’s behavior did occur on property: “in doctors’ offices, in pharmacies, homes. In schools, universities, parks.”

The state’s lawyers, including the attorney general, Mike Hunter, laid out their case for nearly two hours, seeking to badly tarnish the company best known for its baby powder and baby oil.

J & J has a reputation for being willing to withstand numerous rounds of trials before agreeing to settle. In that spirit, Mr. Ottaway jumped right in. Eschewing the conventional break between each side’s statements, he grabbed five minutes before lunch to begin damage control. He threw down what will most likely be the defense’s own earworm, made famous in 1770 by John Adams in his defense of British soldiers involved in the Boston Massacre: “Facts are stubborn things.”

In 2009, when J & J’s promotional materials said that opioids “rarely caused addiction,” the Food and Drug Administration made virtually the same assertion, he said. And to push back against Mr. Beckworth’s insistence that the company marketed opioids to children, Mr. Ottaway played a four-minute video, created by the defendants and a school nursing association for high school students, that bluntly described the many dangers of prescription opioids. The company didn’t target teenagers, he said. It warned them.

The company’s defense appears to be multipronged: that each drug meticulously took a decade to develop; that the company and federal regulators continued to monitor the drugs after launch; that the state, through licensing doctors and pharmacists, had its own oversight responsibility; and that the company’s goal all along was to aid millions of patients with chronic pain, which he characterized as “a soul-stealing life-robbing thief.”

When the drugs, approved by federal agencies, were used as indicated by warning labels and according to a provider’s instructions, he said, they did not result in addiction and death. He pointed to Oklahoma’s own regulations, which he said had looser controls over OxyContin than J & J’s products, despite mounting evidence showing that much of the diversion and addiction-related problems were connected to Purdue’s product, not J & J’s.

Though he deplored the use of the courtroom to solve the state’s opioid crisis, Mr. Ottaway said in conclusion: “When you’re right, you fight.”