Why you should NOT sprinkle extra salt on your dinner: People who eat saltier meals are 28% more likely to die before 75, study finds

Sprinkling a few dashes of salt onto your dinner could send you to an early grave, a major study suggests.

Researchers tracked more than 500,000 Britons for almost a decade.

Results showed people who always added extra salt to their meals were 28 per cent more likely to die before turning 75, compared with those who either never or rarely add it.

Excess salt in your system leads to water retention in the blood, putting pressure on your blood vessels, raising your blood pressure. This can, subsequently, raise the risk of a heart attack or stroke.

Heart disease and strokes are one of biggest biggest killers, killing about 160,000 a year, with the American death toll about five times higher.

NHS guidelines say adults shouldn’t eat more than 6g of salt a day. Children should have even less.

However, experts say salt ‘hidden’ in our food means many Britons are eating more salt that they realise. 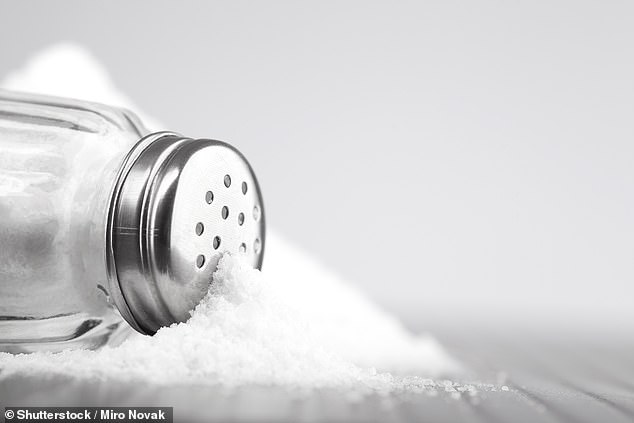 Regularly adding salt to food could knock up to two years off your life expectancy according to a study of 500,000 Britons

Edinburgh University researchers want people to eat 350 calories of meat, dairy and fish every day — the equivalent of around one large chicken breast.

They estimate people in G20 countries eat about 620 calories of animal products on average, roughly the same as two large beef burger patties.

People should also try to consume 720 calories of fruit and vegetables, the experts claimed. For example, an apple, banana and two peppers have around 100 calories each.

The shake-up of eating habits would reduce deaths related to obesity, such as heart disease, type 2 diabetes and cancer, they say.

Experts behind the proposal — who also recycle the disputed argument that cutting back on meat is good for the environment — claim policymakers should use Covid recovery plans to push people to eat healthier.

Chloe MacArthur, from the British Heart Foundation, said: ‘We need some salt in our diet.

‘But eating too much may lead to high blood pressure, which in turn raises the risk of heart attack and stroke.

‘While it is always important for people to be careful about adding too much salt to food, the vast majority of salt is already in food before we buy it, which means we are consuming more than we realise.

Researchers decided to look at adding salt at the table because assessing overall salt intake is tricky due to the high levels of salt in everyday diets.

Sodium is added to range of foods from ready made meals like instant soups to pasta sauces to make then taste nicer.

Salt can also boost their shelf life and is added to products like sliced hams and other cured meats.

At the beginning, people were asked how often they sprinkled salt on their meals — with the options of never/rarely, sometimes, usually or always.

During an average of nine-years follow-up, some 18,474 premature deaths (under the age of 75) were recorded.

About three in every 100 people aged between 40-69 die prematurely in the general population.

New calculations for the study, published in the European Heart Journal, suggest one extra person in every 100 who add salt to their food may die young.

Professor Lu Qi and team also calculated how many years the salt-lovers knocked off their lives, compared with those who did not add salt.

At the age of 50, around 1.5 years and 2.3 years were knocked off the life expectancy of women and men who always added salt to their food, respectively.

Scientists found the risks of early death were reduced slightly in people who ate the most fruit and vegetables.

Professor Qi wrote: ‘Even a modest reduction in sodium intake, by adding less or no salt to food at the table, is likely to result in substantial health benefits.

‘Adding salt to foods at the table is a common eating behaviour directly related to an individual’s long-term preference for salty-tasting foods and habitual salt intake.

‘In the Western diet, adding salt at the table accounts for 6 to 20 per cent of total salt intake.

‘And [it] provides a unique way to evaluate the association between habitual sodium intake and the risk of death.’

But Professor Qi added: ‘Further studies are needed to validate the findings before making recommendations.’

Heart disease and strokes account for  a quarter of deaths in the UK, or 160,000 per year, equivalent to about one death every three minutes.

Meals should be based on potatoes, bread, rice, pasta or other starchy carbohydrates, ideally wholegrain, according to the NHS

• Base meals on potatoes, bread, rice, pasta or other starchy carbohydrates, ideally wholegrain

• 30 grams of fibre a day: This is the same as eating all of the following: 5 portions of fruit and vegetables, 2 whole-wheat cereal biscuits, 2 thick slices of wholemeal bread and large baked potato with the skin on

• Eat some beans, pulses, fish, eggs, meat and other proteins (including 2 portions of fish every week, one of which should be oily)

• Choose unsaturated oils and spreads and consuming in small amounts