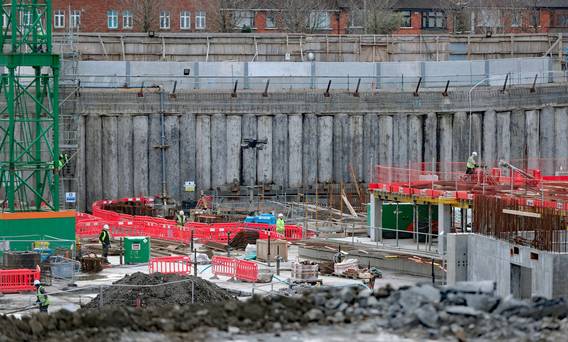 An initial report into the massive over-run for the children’s hospital budget raised questions about the role of the design team in the escalation, the Dáil has heard.

The design team – from professional services firms who are responsible for the design and costings of the landmark hospital – failed to raise the alarm about the looming over-run, a report into the runaway budget has found.

A significant proportion of the €450m increase can be traced in part to issues that emerged during the design process – including €100m due to omissions and underestimation of materials.

A preliminary investigation by Mazars delivered last December determines that the 56pc increase in construction costs led to the cost per square metre for the new hospital jumping from €3,600 to €5,600.

The report examined a number of issues including the cost increases and reporting them. Among them was that the final design added €94m to the original budget due to rises in materials needed and detail emerging on the quality of necessary supplies.

Another €21m emerged due to “omissions”, while €50m was not achieved in savings as had been projected.

The report also found there was a delay in the so-called Guaranteed Maximum Price (GMP) process – the means by which the final construction costs were reached – but this did not contribute to the cost escalation. It did however delay the true escalation emerging.

Last night embattled Health Minister Simon Harris faced further questions on the debacle and said he did not wish to pre-empt the report into the overrun but that report would look at issues in relation to the design team.

He said the report found things that “quite frankly did not go right in relation to the design” and the PricewaterhouseCoopers report will look into that more detail, he said.

Mr Harris also moved to assure TDs that any entity or company found to have acted inappropriately would be pursued with the “full vigour” of the law.

He later admitted that the elasticity of the budget for the second phase of works on the hospital, and an estimation in the quantity of materials needed to build it, were “not realistic” and were factors that played into the over-run.

Fianna Fáil’s Health Spokesperson Stephen Donnelly pressed the minister on why it was not brought to his attention that the project was “spiralling out of control” when it was raised “again, and again” by those involved in the project.

Concerns raised by the National Paediatric Children’s Hospital Board (NPHDB) about the capability of the lead contractor, BAM, were also raised during the latest Dáil debate on the issue.

Last September the board raised concerns the company “fell short of what was expected”, according to minutes of a board meeting.

Labour Party TD Alan Kelly questioned why the “serious concerns” raised at board level were not brought to the minister’s attention at that time. Mr Harris issued a fresh defence of his handling of the cost escalation and the way in which he alerted the Government, saying he fully rebuts that partial information leads to better decision making.