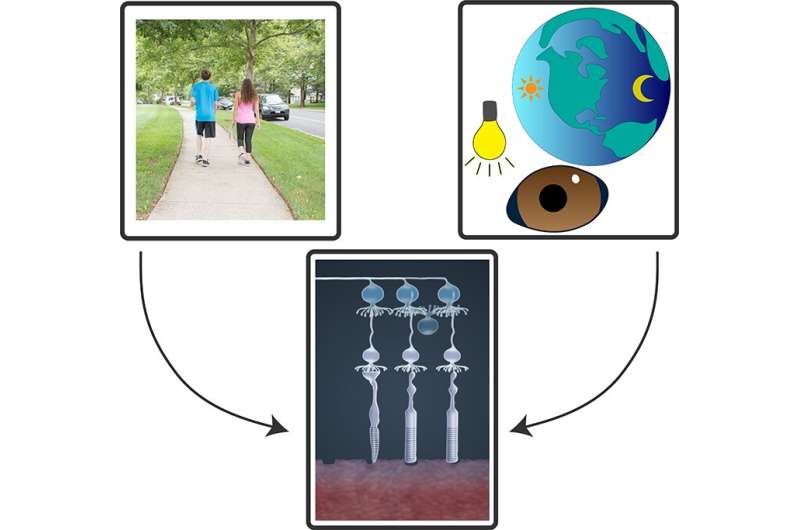 The eye’s light-sensing retina taps different circuits depending on whether it is generating image-forming vision or carrying out a non-vision function such as regulating pupil size or sleep/wake cycles, according to a new mouse study from the National Eye Institute (NEI) and the National Institute of Mental Health (NIMH). Published in Cell Reports, the findings could have implications for understanding how our eyes help regulate mood, digestion, sleep, and metabolism. NEI and NIMH are part of the National Institutes of Health.

“We know a lot about pathways involved in image-forming vision, but until now it remained unknown if and how non-image-forming visual behaviors rely on these same pathways in the eye,” said Johan Pahlberg, Ph.D., head of the Photoreceptor Physiology Group at NEI and a senior author of the study.

Vision begins when light travels into the eye and hits the retina’s light-sensing photoreceptors. The photoreceptors transfer signals through several layers of retinal neuron before those signals are sent to the brain. Light also triggers certain non-vision functions, such as controlling how much light enters the eye through the pupil (pupillary light reflex) and regulating the wake/sleep cycle (circadian rhythm). Circadian rhythm disruption has been linked to sleep problems, obesity, and other health issues.

The researchers compared the mice’s responses to visual stimuli while assessing pupillary light responses and monitoring their nocturnal wake/sleep cycle. They determined that while image-forming vision can use rod and cone photoreceptors, as well as all the types of bipolar cells, the same was not true for non-image forming functions. The pupil response relies exclusively on rod photoreceptors, while cones are unable to control this behavior. Meanwhile, both circadian rhythm regulation and the pupil reflex only use “on” bipolar cells pathways, relying on rod bipolar cells and “on” cone bipolar cells, but not “off” cone bipolar cells.

“We were really surprised to find that animals with only ‘off’ bipolar cells can’t adjust to changes in the day/night cycle, but can still see and respond to visual events, meaning they have functional image-forming vision. It was really interesting to us that the non-imaging forming functions completely ignore information from the ‘off’ pathway,” said Pahlberg. “We were equally surprised that rod photoreceptors, which are optimized for low light conditions, were still being used for the pupillary response even when light levels were high. We really thought the rods would be maxed out at that point.”