London’s unhealthiest high streets: Haringey tops the chart as the worst offender (but the best is just three miles away… in the same borough)

London’s unhealthiest high streets have today been named – with one in Haringey being shamed as the worst in the capital.

West Green Road was found to score worst in a league table of the streets with the most betting shops, takeaways, payday lenders, tanning shops and off-licences.

At the other end of the scale of 146 high streets in London, Muswell Hill – also in Haringey just a few miles away – was listed as being the healthiest.

Researchers found poorer areas tended to have more shops encouraging unhealthy living, whereas the opposite is true of richer neighbourhoods. 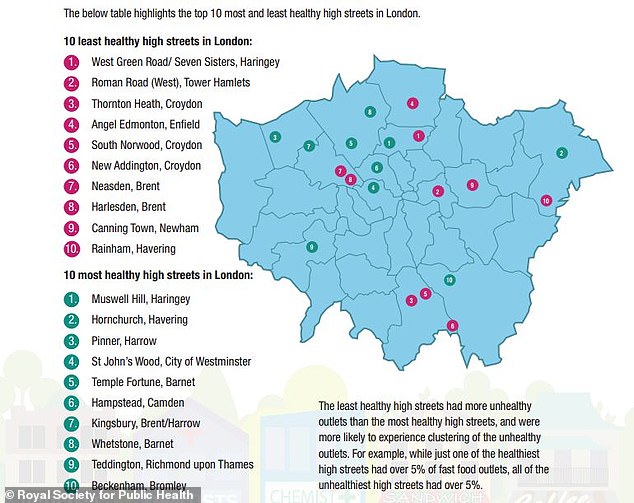 A report by the Royal Society of Public Health has ranked the most and least healthy high streets across London, with both the best and worst – Muswell Hill and West Green Road – both in the northern borough of Haringey

Roman Road (West) in Tower Hamlets and Thornton Heath in Croydon were also named in the worst three offenders.

South Norwood and New Addington, both in Croydon, placed fifth and sixth, while Angel Edmonton in Enfield ranked fourth.

The rest of the top ten unhealthiest high streets in London were scattered around Brent, Newham and Havering.

In contrast, Hornchurch in Havering was unearthed to be the second healthiest high street in the capital, followed by Pinner in Harrow.

Health on the High Street, a report published today by the Royal Society for Public Health, has ranked high streets across London.

THE LONDON BOROUGHS WITH THE HEALTHIEST HIGH STREETS

THE LONDON BOROUGHS WITH THE LEAST HEALTHY HIGH STREETS

The high streets were rated by how many businesses they have which encourage healthy or unhealthy living, to give an overall score.

People living in areas with healthier high streets live longer than those surrounded by unhealthy shops.

The difference in life expectancy between Muswell Hill and West Green Road, for example, is approximately four-and-a-half years, the Evening Standard reported.

‘Local authorities, who are well placed to make changes, are currently operating with one hand tied behind their backs due to ongoing funding cuts, particularly in some of the more deprived areas that feature prominently in these rankings.’

The RSPH’s rankings of towns and cities across the entire UK will be published tonight.