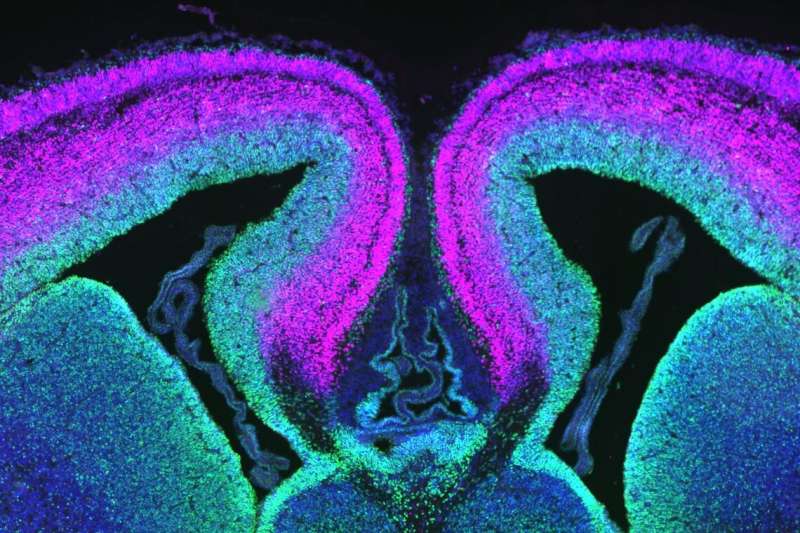 A single gene that was previously found to be the driving force in a rare syndrome linked to epilepsy, autism and developmental disability has been identified as a linchpin in the formation of healthy neurons.

Duke researchers say the gene, DDX3X, forms a cellular machine called a helicase, whose job it is to split open the hairpins and cul-de-sacs of RNA so that its code can be read by the protein-making machinery of the cell. This gene is carried on the X chromosome, so females have two copies of the gene and males have only one.

“If you remove both copies of the gene in a female mouse, that results in a massive microcephaly where the brains are severely reduced in size,” said Debra Silver, Ph.D., an associate professor of molecular genetics and microbiology in the Duke School of Medicine who led the research team. “But the removal of a single copy is probably more closely mimicking what’s happening in human patients,” Silver said.

Put another way, the defects caused by faulty DDX3X are dosage-dependent—the syndrome can vary depending on how badly the production of helicases is affected by mutations. The findings appear June 28 in the open access journal eLife.

When DDX3X is altered by a mutation in early development, “you don’t get as many neurons over time because this gene is required for the production of neurons from progenitor cells,” Silver said. “And it is also helping the progenitors to divide properly.”

If it normally takes a nerve precursor cell 15 hours or so to divide, a mutated DDX3X may make that process take even longer, Silver said. “And what that means over time, if these neural precursors are taking too long to divide, is you fall behind, and the brain doesn’t develop properly.”

In a previous study the team published in March 2020, , using genetic samples from 107 developmentally disabled children from around the world, the researchers found that half of the DDX3X mutations disrupted the gene completely, but the other half only made it work more poorly.

DDX3X mutations are now considered the cause of 1 to 3 percent of intellectual disabilities in females, but the mutations are almost always “de novo,” meaning they happened spontaneously during a developmental stage, rather than being inherited from the parents.

The children in the earlier study were almost all female, leading researchers to suppose that loss of DDX3X in males would be fatal, since they carry only a single copy of the gene. But in this work, Silver’s team discovered that a companion gene carried by the male’s Y chromosome, DDX3Y, can fulfill some of the gene’s function.

To do this work, Silver’s lab, led by Mariah Hoye, developed a new approach to profiling all the newly made proteins of progenitor cells in a living animal’s brain, a technique that could lead to an important understanding of protein synthesis in the brain, she said.

Some of the RNAs that have their translation reduced by damage to DDX3X also have roles in brain development, Silver said. “So it’s helping us to discover what I would call a network of RNAs whose translation depends on this gene. And it starts to give us clues as to how, molecularly, DDX3X may be disrupting brain development.”

DDX3X has also been implicated in neurodegeneration, some cancer progression and innate immune responses. Silver said understanding the cellular processes and molecular targets of DDX3X in the developing brain may help shed light on the basis for many disorders.

“We know of more than 800 families worldwide who have been diagnosed with DDX3X syndrome,” Silver said. “This is definitely an important gene, with likely hundreds of mutations. There’s really tons to learn about how DDX3X controls brain development.”