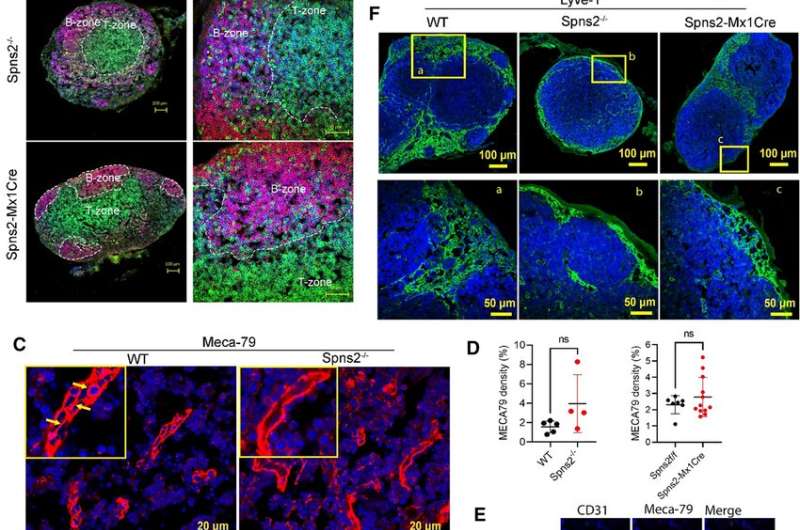 Over time, there is permanent damage or deterioration of the nerves. Current treatments include monoclonal antibodies and oral therapies of sphingosine 1-phosphate (S1P) receptor modulators such as fingolimod and ozanimod.

However, S1P receptor modulators have been found to have multiple side effects, such as slowing heart rate and reduced lung function, due to the ubiquitous expression of S1P receptors in many cell types including those in blood vessels. Hence, a more targeted therapy would improve the safety profile of S1P drugs.

In a new study led by Assistant Professor Nguyen Nam Long from Yong Loo Lin School of Medicine, National University of Singapore (NUS Medicine) the researchers showed that targeting S1P transporters might be effective in treatment of MS, while preserving the cardiovascular functions of S1P signaling.

Their findings show that elimination of Spns2 in postnatal life resulted in reduced levels of S1P in the lymphatic, but not the blood circulation system. In addition, they found that different forms of S1P were released into the lymph for attracting immune cells’ emigration from the lymph nodes.

The elimination of Spns2 thus caused a reduction in the levels of white blood cells in the blood. When Spns2 deficient animals were exposed to the disease model of multiple sclerosis, these animals, but not the normal animals were resistant to the development of multiple sclerosis. They found that pathogenic white blood cell types in the central nervous system were reduced when Spns2 functions are blocked.

Assistant Professor Nguyen Nam Long, from the Immunology Translational Research Program (ITRP) and Department of Biochemistry at NUS Medicine, explained, “Membrane transporters have been neglected to explore as drug targets. This study would present Spns2, an S1P transporter as a novel drug target for the treatment of MS and possibly other inflammatory diseases that could reduce the risks of having multiple side-effects that have been reported for S1P receptors’ modulators.”

“Our team as well as other researchers in the world are searching for the inhibitors of this protein in a hope to uncover a line of novel therapeutics against MS and other inflammatory conditions” added Dr. Nguyen.

Associate Professor Veronique Angeli, director of ITRP added, “This study by Asst Prof Nguyen and our researchers in ITRP deepens our understanding of the inflammation in various disease pathologies. With every new insight, these discoveries can be translated from bench to bedside to contribute towards novel treatment methods for the population to enhance health for the future.”

The article is published in Cellular and Molecular Life Sciences.