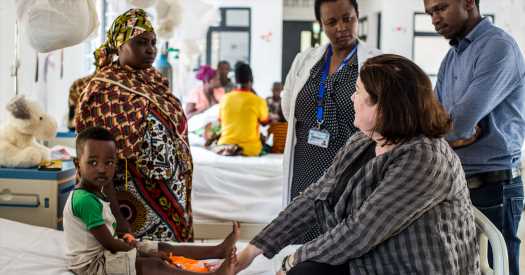 She Takes a Hands-On Approach to Health Care

This article is part of our Women and Leadership special section, which focuses on approaches taken by women, minorities or other disadvantaged groups challenging traditional ways of thinking.

In 2014, when Ebola was raging across West Africa and terrifying the world, Sheila Davis had a comfortable desk job in Boston.

But Dr. Davis, who holds a Ph.D. in nursing, could not sit and watch from afar. So, she headed to Liberia. She then used her experience in the Ebola wards to help the nonprofit she worked for, Partners in Health, figure out how to rebuild the region’s devastated health care system.

Watching Dr. Davis take on both roles — caregiver and organizational leader — persuaded Ophelia Dahl, a Partners in Health co-founder, to push for Dr. Davis’s promotion to chief executive. “In a way, it’s emblematic — she was willing to sweat in a suit under very stressful, emotionally taxing circumstances,” said Ms. Dahl, who led the search committee. “And then to also then go back and help us really think through how to fund it, how to do it well, how to stay in the country for 10 years. That’s unusual in a C.E.O. of a very complex and broad organization.”

Dr. Davis got the job, and she has been chief executive since July of the Boston-based nonprofit, which focuses on bringing modern medicine to the poorest and sickest communities in the world.

Her commitment to social justice began in college at Northeastern University, when she saw how poorly AIDS patients were treated, even by those being paid to care for them. Now, she is upending her nonprofit’s organizational structure to make it truer to its social justice mission. Instead of being run by a team based in Boston, the organization’s new leadership team includes those who run the 10 Partners in Health sites around the world: in Rwanda, Haiti, Peru, Kazakhstan and the Navajo Nation, among others. This power shift should change the way the organization operates, Dr. Davis said, putting into action what people on the ground have long wanted.

Too often, Dr. Davis said, well-meaning people in wealthy countries have been the voice for people in needier places. “I shouldn’t be the voice for anybody,” she said. “We should pass the mic to them and let them speak.”

Looking over old photographs in her office in Boston’s Prudential Center a few days before she headed to Rwanda to visit the organization’s facilities there, Dr. Davis explained the origins of her interest in providing health care — not only to the sick but also to society’s most disadvantaged and bereft — and the path she took to become a leader in global health delivery.

Nursing student, 1986 Sheila Davis was on the verge of flunking out of the University of Maine. A self-described partier as an undergraduate, she managed to transfer to Northeastern University. “I think it’s what saved me,” she said. “I think I would have ended up never leaving Brewer, Maine.”

Strong women, 1999 Dr. Davis moved with her daughter, Eva, center, to Boston in 1995 after a divorce. Her mother, Mary, right, took the bus down from Maine one night a week to watch her granddaughter while Dr. Davis pursued her doctorate in nursing at night.

Fighting Ebola in Liberia, 2014 Dr. Davis took a job in 2010 at Partners in Health after a devastating earthquake hit Haiti. The organization delivers care to about one million of the nation’s 11 million residents. Dr. Davis helped build a similar program in Liberia that now treats 50,000 patients a year.

Working with others When the chief executive position opened up at Partners in Health, Dr. Davis said she decided to put her name in “because I wanted my ideas to be heard.” As a nurse, she did not think she had a real shot at getting the job.

Defining moment Dr. Davis said she was horrified by the poor treatment of AIDS patients she witnessed as a nursing student. That was not the profession as she thought it should be practiced. She decided to be a different kind of nurse. “That 100 percent defined the rest of my life,” she said.

Teaching and helping Partners in Health has launched a medical school in Kigali and is now teaching its first class: 30 Rwandans, including 20 women, who have signed on for more than six years of medical education. There is also a master’s program. In the long-term, the organization wants the school to attract trainees from all across Africa.

Hands on Dr. Davis said she was still learning how to lead Partners in Health without trying to jump in and “fix” everything, because “that isn’t what I’m there to do.” But part of her will always be the nurse who sees a problem, scrubs in and solves it.