Smoking rates are nearly 10 TIMES higher in areas of England

Revealed: Smoking rates are nearly 11 TIMES higher in areas of England lagging behind in ‘smoke-free’ plans which could see lighting up cigarettes in pub gardens become ILLEGAL and supermarkets banned from selling tobacco

Smoking rates are nearly eleven times higher in parts of England lagging most behind in the Government’s bold plan to eradicate the killer habit, MailOnline can reveal.

A quarter of adults are current smokers in Fenland in Cambridgeshire, the worst smoking rate in the nation.

For comparison, the rate stands at just 2.3 per cent in Ryedale, a rural area in North Yorkshire.

Our analysis comes after Health Secretary Sajid Javid was yesterday urged to adopt tougher anti-smoking policies, including one that recommended making lighting up in pub gardens illegal.

Other bold proposals included hiking the age limit for purchasing cigarettes in England by 12 months every year until no-one can legally buy tobacco products, prohibiting supermarkets from selling cigarettes and forcing TV shows and films featuring smoking scenes to be rated 18+.

Mr Javid is said to be ‘minded against’ accepting the most extreme recommendations, although he publicly said ministers would ‘carefully consider’ all 15 policies made in an independent review.

The recommendations are based on a report headed former children’s charity chief Javed Khan who was tasked with finding ways England could be smoke-free by 2030 — defined as less than five per cent of people smoking, compared to the 15 per cent in 2019.

The report highlighted how smoking rates differed hugely across England, with the most extreme example cited by the report being Burnley with a smoking rate 4.5 times higher than in Exeter. But separate Government figures show the gap is actually more than twice that size. 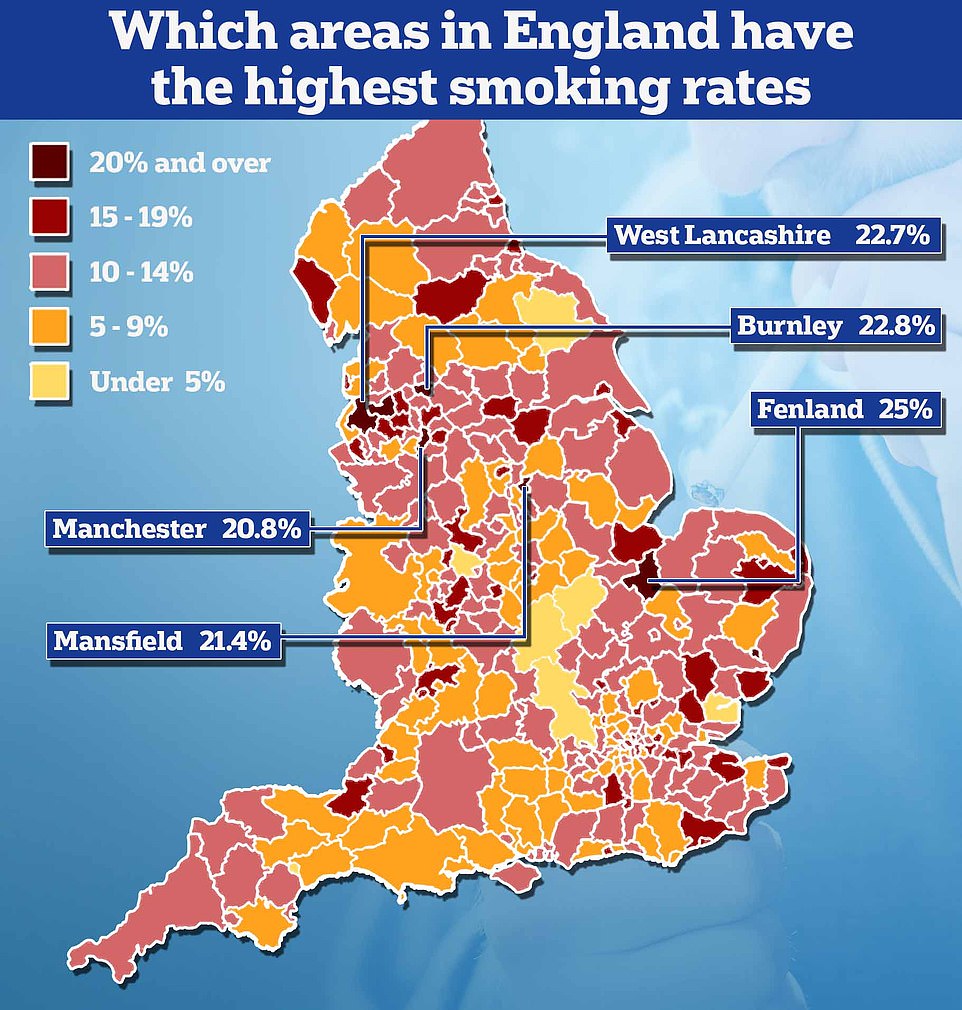 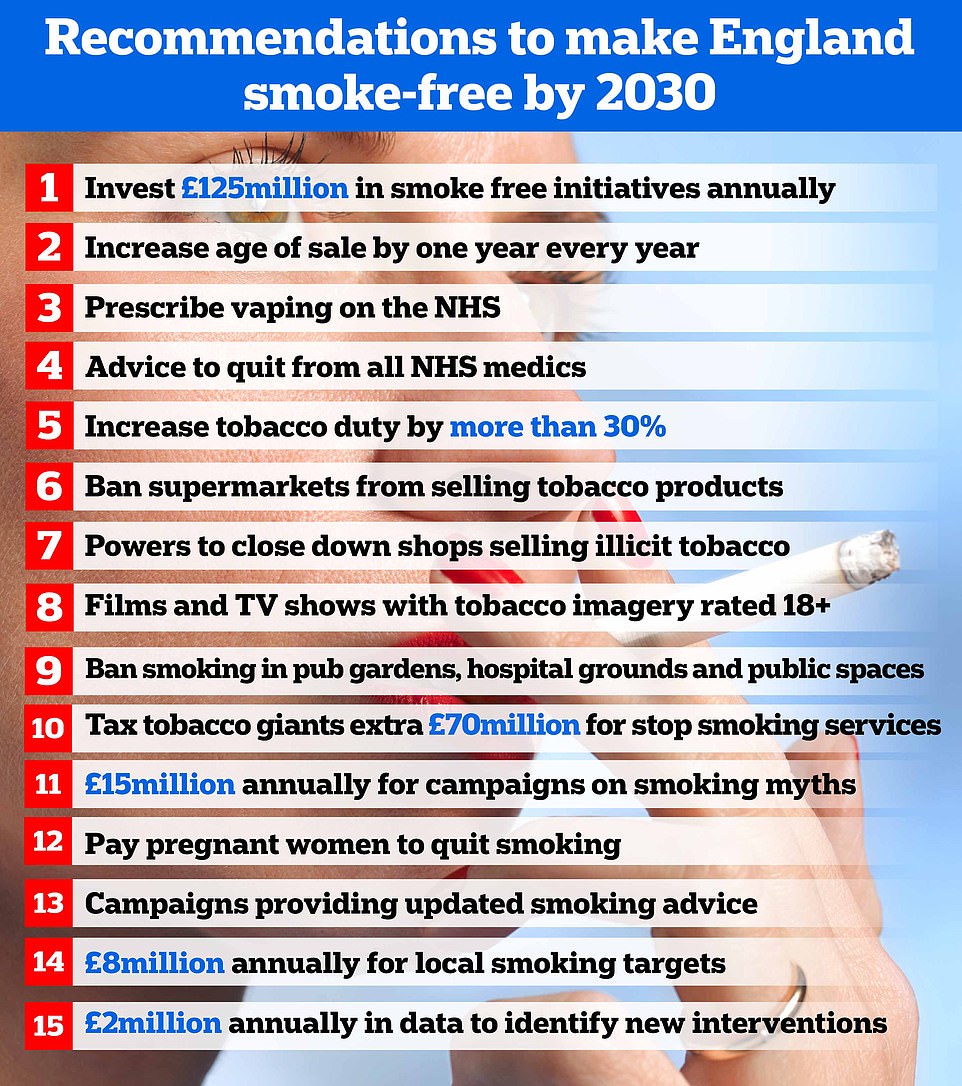 2007: England, Wales and Northern Ireland bring in indoor ban. In England, smoking is banned in almost all enclosed public spaces and the NHS goes smoke-free. Legal age to buy cigarettes raised from 16 to 18

2015: Smoking in cars with children banned in England and ban on the display of tobacco in small shops comes into force throughout the UK

2017: Government issues target to reduce smoking prevalence among adults to 12 per cent or less by 2022

2019: Department of Health publishes plans to make England smoke-free by 2030

2020: Menthol cigarettes are banned in the UK and EU

Fenland took the top spot for smokers for data gathered from 2020, with a quarter of all adults lighting up.

Burnley, in Lancashire, came second with 22.8 per cent of adults smoking, followed closely by West Lancashire with 22.7 per cent.

Rounding up the top five was Mansfield in Nottinghamshire (21.4 per cent) and Manchester (20.8 per cent).

Ryedale is miles ahead as the place with the least percentage of the population smoking, with just 2.3 per cent of adults lighting up, according to the figures.

It was followed by Maldon in Essex, with a smoking rate more than double Ryedale’s, of 4.7 per cent.

Lichfield in Staffordshire and Exeter then came in at 4.8 and 4.9 per cent, respectively.

Mid-Devon tied with Elmbridge in Surrey with a smoking rate of exactly 5 per cent.

This means of all the 300-plus local areas, only four in England currently meet the smoke-free objective of less than 5 per cent.

The Kahn review and it’s radical ‘nanny state’ recommendations were welcomed by some and derided by others when it was published yesterday.

In addition to pub-garden and supermarket bans other suggestions included getting doctors to prescribe e-cigarettes and vapes to smokers to help them quit, paying expectant mothers to quit and branding cigarette sticks with how many minutes it shaves off of someone’s life and making them a ‘dissuasive’ colour like green.

Another bold proposal was hiking the age limit for purchasing cigarettes in England, currently set at 18, by 12 months every year until no-one can legally buy a tobacco product.

Ministers are expected to reject this policy, which is being rolled out in New Zealand and means anyone born after 2008 will never be able to legally buy cigarettes. 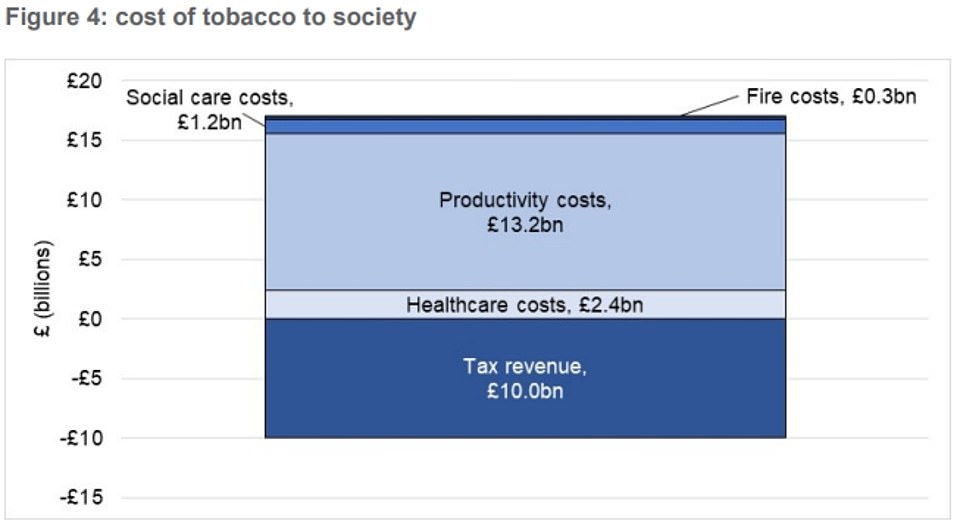 The graph shows the cost of tobacco to society compared to tax revenue, which is £10billion. The costs include £13.2billion to productivity, £2.4billion on healthcare, £1.2billion to social care and £300million to smoking-related fires 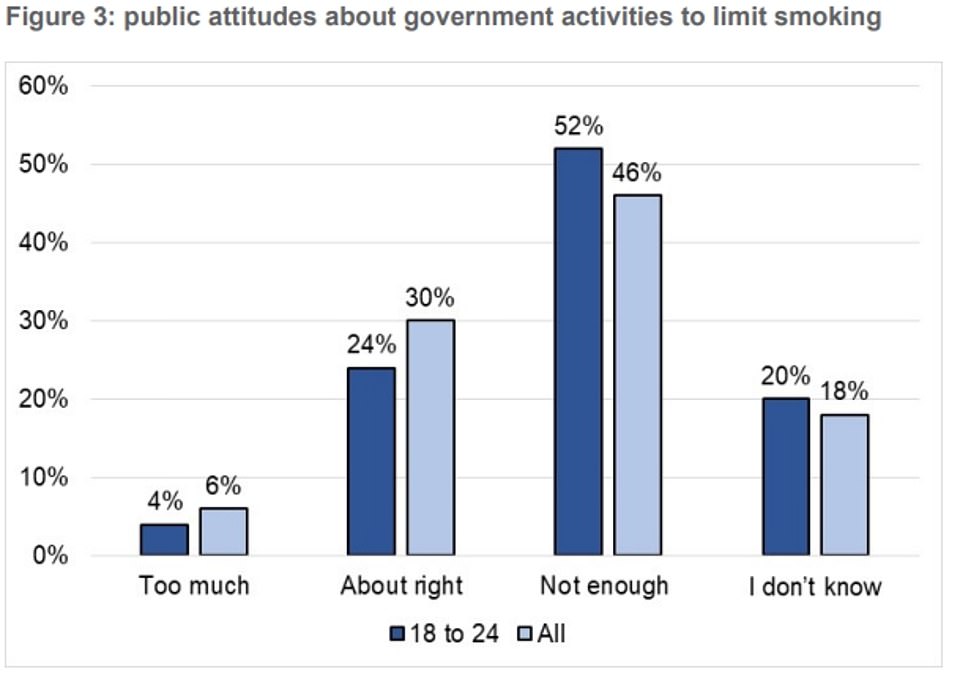 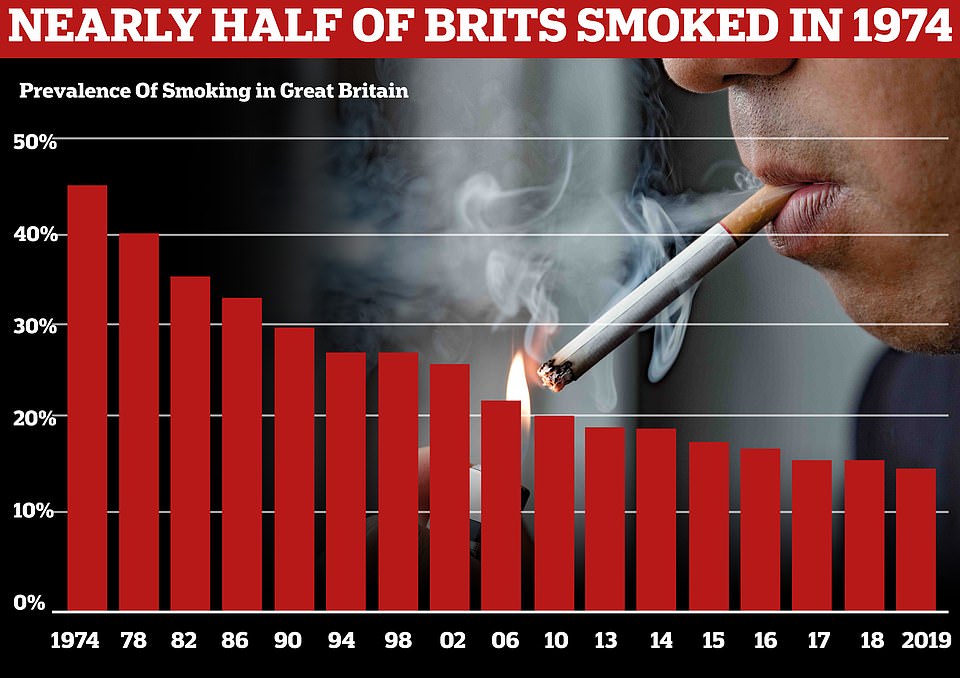 Smoking has steadily decreased since 1974, with around 15 per cent of the population smoking in 2019. That year, the Government set a target of becoming smoke-free by 2030

Could cigarettes be slapped with INDIVIDUAL warnings? 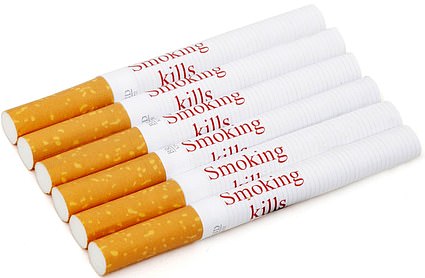 Tobacco manufacturers would have to use eight different warnings in rotation on its sticks and rolling paper under the terms of the Cigarette Stick Health Warnings Bill.

These would include ‘smoking kills’ and other messages to highlight the devastating health effects, the financial cost and contact details for advice on quitting.

He first raised it as a health minister in Margaret Thatcher’s government in 1979.

The Government should also make ‘the polluter pay’ by forcing the ‘dying’ tobacco industry to pay an extra £70million in tax every year to fund towards a £125million fund to support quitting and e-cigarettes on the NHS, the report says.

Dr Khan said his recommendations, if implemented, would deliver a ‘smoke-free society’, save lives, save money and address health disparities. He called on ministers to make smoking ‘obsolete once and for all’.

His calls were welcomed by charities and anti-smoking groups like Cancer Research UK and Action on Smoking and Health who called on the Government to implement the recommendations.

But pro-smoking campaign group Forest said a ‘creeping prohibition’ won’t stop young people from smoking but instead drive the same of tobacco ‘underground’, forcing Britons to buy cigarettes on ‘the black market where no one pays tax and products are completely unregulated’.

Daniel Pryor, head of research at think tank the Adam Smith Institute, said: ‘Aside from the welcome acknowledgement that the Government should double down on the success of vaping, the Khan smoking review is nanny-statism on steroids.

‘Continually raising the smoking age every year is illiberal nonsense and would create a bizarre two-tiered system of adulthood.

‘Do we really think 21-year-olds asking 22-year olds outside shops to buy cigarettes for them is a rational state of affairs?

‘Moreover, plans to ban online sales and substantially increasing duties are regressive and are likely to hit those on the lowest incomes hardest; the very people that the review claims to be helping.

‘Smokers need the carrot, not the stick.’

If any of the proposals are accepted it would be first new anti-smoking initiative since 2017, when officials introduced a policy which meant that meant all branded packaging had to be replaced with plain greenish-brown boxes.

This followed the minimum age for tobacco purchases being raised from 16 to 18 across Britain in 2007, when it also became illegal to smoke in enclosed spaces.