Working long hours could make you BALD: Spending more than 52 hours each week in the office ’causes your hair to shed twice as quickly’

Working long hours could double your chances of ending up bald, researchers have claimed.

Scientists found men who worked more than 52 hours a week lost their hair at twice the speed of those who spent less than 40 hours in the office.

They say it is likely stress caused by too much work and not enough downtime that is the main cause.

The research, which examined more than 13,000 employed men, is believed to be the first to look specifically at the impact of long working hours on hair loss.

Changes in hormone levels which occur during stress can wreak havoc on several areas of the body.

When these extra hormones are made, they can inhibit the growth patterns of the hair follicles on your scalp. 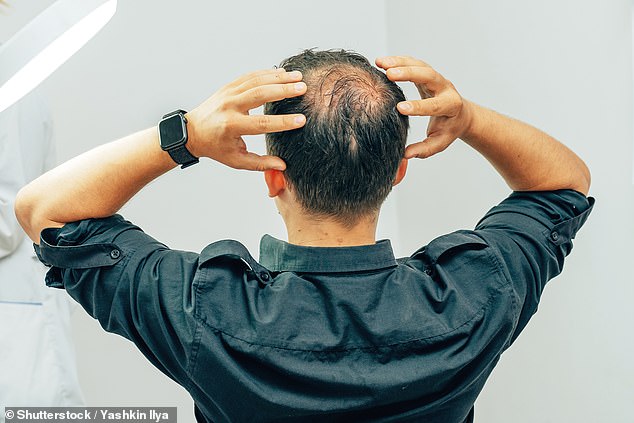 Working long hours may trigger balding in your 20s and 30s, a new study has suggested (file image)

Previous studies have shown stress to cause the immune system to attack these follicles, for reasons that are not yet known.

It is also thought stress causes the hair to prematurely enter the catagen, or ‘resting phase’, the end of the active growth of hair.

Because no new hairs are growing at this stage, if they fall out then a bald patch is left in their place.

Academics behind the study have now urged legislators to limit the number of hours people can be employed.

They were split into three groups: ‘normal’, who worked a 40-hour week, ‘long’ as up to 52 hours, and ‘much longer’ as any time above that.

Long working hours were found to be significantly related to the development of alopecia, or hair loss.

Incidences of baldness in the normal group were two per cent by the end of the study. In the ‘long’ group it was three per cent and almost four per cent in the ‘longer’ category.

The researchers say stress is the most likely culprit, triggering damage to follicles and causing the hair to enter the ‘catagen’ phase.

WHAT ARE THE CAUSES OF HAIR LOSS?

It is perfectly normal for people to lose small amounts of hair as it replenishes itself and, on average, people can shed between 50 and 100 hairs per day.

However, if people start to lose entire patches of hair or large amounts of it it can be more distressing and potentially a sign of something serious.

Pattern baldness is a common cause of hair loss as people grow older. At least half of men over the age of 50 will lose some of their hair just through the ageing process, according to the British Association of Dermatologists.

Women may lose their hair as they grow older, too.

Other, more concerning causes of hair loss include stress, cancer treatment such as chemotherapy or radiotherapy, weight loss or an iron deficiency.

Most hair loss is temporary, however, and can be expected to grow back.

Specific medical conditions which cause the hair to fall out include alopecia, a disorder of the immune system; an underactive or overactive thyroid; the skin condition lichen planus or Hodgkin’s lymphoma, a type of cancer.

People should visit their doctor if their hair starts to fall out in lumps, falls out suddenly, if their scalp itches or burns, and if hair loss is causing them severe stress.

Lead author Kyung-Hun Son said: ‘The results of this study demonstrate that long working hours is significantly associated with the increased development of alopecia in male workers.

‘Limitation of working hours in order to prevent alopecia development may be more necessary from younger workers, such as those in the 20s and 30s, at which hair loss symptoms start to appear.

‘Preventive interventions to promote appropriate and reasonable working hours are required in our society.

The research was published in the Annals of Occupational and Environmental Medicine journal. It did not look at women.

Son added: ‘A lot of studies have revealed the mechanism of alopecia development by stress.

‘In mice experiments, stress was significantly related to the inhibition of hair growth, induction of catagen cycle, and damage of hair follicles.

‘Other researches have also suggested that stress can affect injuries and inflammations of hair follicles, cell deaths, and inhibit hair growth.

‘Based on these previous researches, we can cautiously assume that the relationship between long working hours and the development of alopecia is likely to be mediated by job-related stress.’

The research has been welcomed by leading UK hair restoration surgeon Dr Bessam Farjo, who warns stress can often be the trigger for other types of hair loss, too.

Dr Farjo, founder of the Farjo Hair Institute in London, said: ‘The stress caused by working long hours is likely to be a process that builds up and gets worse over time.

‘But other stressful events can trigger much more immediate hair loss, and it’s something often seen in women who’ve suffered traumatic child births.’

Human hair goes through three growth cycles, which work to produce new follicles to replace those that fall out.

The “anagen”, or active phase, sees root cells divide rapidly, adding to the hair shaft and sees the hair grow around half an inch a month.

The hair then goes into a transitional ‘catagen’, or ‘resting’, phase which signals the end of hair growth.

Then it is the ‘telogen’ shedding phase – when the hair shaft falls out and the follicle remains inactive for three months before the entire process is repeated.

‘Typically, around 10 per cent of the hairs on your head are in this telogen phase,’ Dr Farjo said.

‘But an incidence of extreme stress can shock the system, triggering much more hair to enter the shedding phase.

‘It’s a condition known as “telogen effluvium” and while it will rectify itself in a few months, it can be really distressing for the patient.’

Androgenetic alopecia – or male or female pattern baldness – is the most common type of hair loss.

Other causes of hair loss are known to include genetic factors, stress, infection, an imbalance of androgen hormones, blood circulation disorders, nutritional imbalance, and drug use.