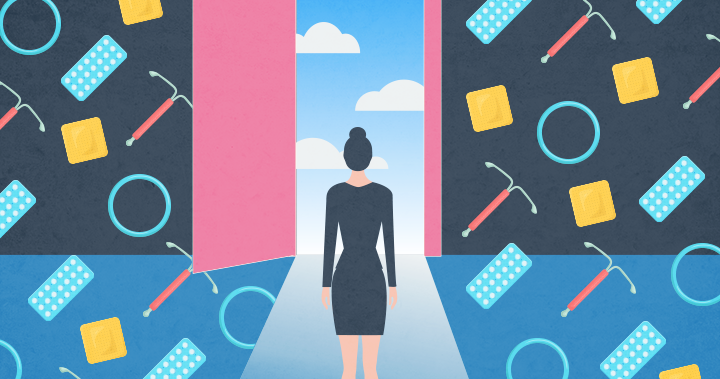 ‘The migraines stopped’: Why more women have gone off birth control pills

Kelsie Bryson says the excruciating migraines started around 2008, when she was 18 years old.

They would come about once a month and cause what the now 28-year-old Bryson calls “really terrifying side effects.”

“I would experience numbness in the right side of my body — including in my mouth, which would prevent me from talking for 15 or so minutes at a time — vomiting and confusion,” she told Global News.

“I would be at work, and suddenly, it would be hard to read words or speak. I would bump into things and then my body would go numb. I even went to the hospital once because the numbness on my right side lasted for about six hours.”

Finally, a doctor told Bryson that her symptoms were likely caused by the birth control pill she was on and advised her to stop using it. After taking the pill for eight years, she went off.

“The migraines stopped completely for a few years; I maybe get one every 18 months now,” she said. “My cramps definitely worsened [being off the pill], but it’s worth not having the migraines.”

Bryson is one of many women who have gone off the birth control pill in recent years.

According to a survey by the Society of Obstetricians and Gynaecologists of Canada, the number of women on the pill has dropped. In 2006, 39 per cent of women over 30 said they used oral contraceptives; as of 2016, just less than 16 per cent said they did.

Reported side effects, paired with growing interest in non-hormonal birth control, are some of the reasons why fewer women are taking the pill today. Plus, with the rise of period-tracking apps and the increasing popularity of IUDs, women have more options now than they did in the past.

“For many years, the birth control pill would have been the first line of contraception for cycle control and all the non-contraception benefits associated with it so we went to it almost all the time,” Dr. Sari Kives, a gynecologist and associate professor at the University of Toronto, told Global News.

“I think what’s happening now… is that people are looking at all the options more closely, and [the pill] doesn’t necessarily always have to be the first line [of contraception]… we’re just being better at providing our patients with options.”

How safe is the pill?

There are two types of hormonal birth control pills: combination pills, which contain estrogen and progestin, and progestin-only pills (progestin is a form of progesterone).

Kives said that any time you ingest progestin, whether that’s through the pill or a hormonal IUD, there’s a chance your mood can be altered.

“Progesterone has been potentially associated with mood, but there’s no direct correlation,” she explained.

Short-term risks of the pill include spotting, breast tenderness, nausea, vomiting and bloating — but these typically stop after the first couple months of taking it. Serious side effects, like blood clots, are rare, Kives said, as are complications like heart attacks, stroke, increased blood pressure and liver tumours.

There’s anecdotal evidence, however, that the hormonal birth control pill can affect mental health, weight and skin. There has even been some research that suggests oral contraceptives may be linked to depression.

On the flip side, on top of being one of the most effective forms of birth control, if taken properly, the pill can also help control cycles, reduce cramps, improve acne and decrease the risk of ovarian and endometrial cancers. Kives even said that for women in the perimenopause phase who experience low moods, their well-being can be improved by going on a low-dose birth control pill, as it helps regulate hormones.

Overall, Kives said that the pill is generally safe for most folks. Some women, however, are not convinced.

Why are women moving away from the pill?

Alisha Sawhney, 25, believes the birth control pill caused changes in her weight. She first went on the oral contraceptive in 2015, which helped regulate her periods.

“For three years, I was on the pill but then I stopped because I was gaining so much weight,” she said. “I didn’t really have any other symptoms with the pill… but now I’m back to not knowing when my period is coming.”

Sawhney said her diet hadn’t changed over the time she was on the pill, and her lifestyle didn’t, either.

“At first, I didn’t put [weight gain] and the pill together … and I kept finding excuses. I think it took a year and a half for me to realize, ‘OK, there’s something wrong,’ and that’s when I realized the pill was the reason,” she said.

While Lara Cardoso, 26, didn’t have any obvious side effects from taking the pill, she stopped taking it at 22 when she realized the drug “wasn’t contributing to the health of [her] body.”

Cardoso said she didn’t feel great about taking something every day that could possibly contribute to serious health concerns, like blood clots and hormonal effects.

Since going off the pill, Cardoso said her mood has improved. She now tracks her cycle with the Flo app.

“Going off the pill helped increase my mood in a positive way,” she told Global News. “I wouldn’t say it was the sole reason [I went off it] but definitely attributed to it.”

Like Cardoso, Bryson said she feels much better now that she’s off the oral contraceptive.

“Going off of the pill was such a good decision,” Bryson said.

“I realized afterwards that my mom went off of it for the same reason I did when she was around 30. Switching brands was never really an option for me because, at the end of the day, I think it was the hormones giving me the side effects.”

What are women using instead?

After experiencing side effects they believe were caused by the drug, many women interviewed for this story said they now rely on period-tracking apps and condoms for birth control. Others use the pullout method — which doctors warn isn’t reliable.

Despite the shift away from the birth control pill, Kives said oral contraceptives are still a favoured method for many women and probably the most popular option.

“I still think you’re going to see the birth control pill used by the vast majority of patients, depending on what they’re looking for,” she said. “There’s many non- contraceptive benefits of the pill that people still like, like the control of their cycle and acne.”

“The pendulum always changes. You’re going to get women now who are looking for less hormonal interventions because there’s always this fear around hormones — not that it’s very well substantiated.”

—With a file from Katie Dangerfield