Revealed: The most common age of death in the UK is 88 for women and 86 for men – as Government figures show how lives have got longer since 1974

The most common age of death in England is 88 for women and 86 for men, official statistics have today revealed.

The numbers have risen from 81 and 74, respectively, in 1974, showing improvements have happened significantly faster for men.

Statistics from the Office for National Statistics (ONS) showed that the modal age of death – the most commonly occurring – rose by 12 years for men. In the same time the improvement was just seven years for women.

Life expectancy changes in recent years have shown men are catching up to women, who have historically lived longer because of biological advantages and safer lifestyles.

Improvements in life expectancy – which is a different, lower figure – have slowed in recent years but it has risen dramatically since the 1970s. 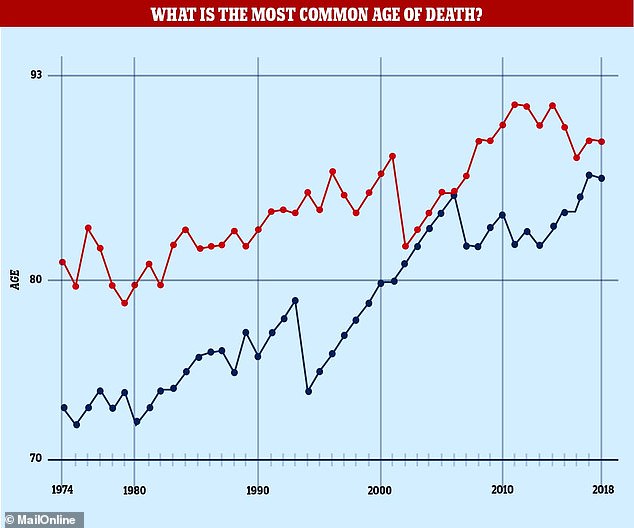 Statistics show that the most common age of death for both men and women in the UK has risen since 1974, from 74 for men and 81 for women to 86 and 88, respectively. Men have been closing the gap on women for a number of years after always dying younger because of health differences and more dangerous occupations

Women live longer than men all over the world for various reasons – among them, that oestrogen naturally lowers cholesterol so puts females at a lower risk of heart diseases and stroke.

Women also tend to be more health-conscious so less likely to put off getting medical help and, in the past, traditionally worked in less dangerous jobs.

Death rates among women went up in 2018 while they fell for men.

It was the fifth time in the past 18 years that female mortality rates have risen.

The Office for National Statistics, which produced the figures, said the numbers were fresh evidence that the life expectancy gap, in which women have historically lived longer than men, is closing.

Ben Humberstone of the ONS said: ‘Mortality rates fell slightly for males but rose slightly for females in 2018. This is likely to close the gap in life expectancy between the two. We are continuing to see the levelling-off of mortality improvements and will understand more as we analyse this data further.’

ONS experts have pointed to the changing lifestyles of men and women. While large numbers of men no longer work in dangerous heavy industry, and many no longer indulge in risky behaviour such as smoking, women work in the same offices as men and may face greater stresses in making a living.

The ONS said that the switch by women toward education and careers has contributed to historically low birthrates.

Female life expectancy in the UK is 83, while for males it’s 79, according to most recent data.

Life expectancy is lower than the most common age of death because of where the modal number sits on the lifeline.

There are more younger ages, and more people who die at them, than there are older ages that people actually live to.

Expectancy improvements are slowing down, recent data has shown, after decades of gains brought on by medical advances, falling smoking rates and improvements in public and workplace health and safety.

‘There is no simple answer to why life expectancy growth is moving at a slower pace than a decade ago,’ David Sinclair, director of the International Longevity Centre UK think-tank said in September.

‘Some argue government austerity or the social care crisis are to blame, others point to a slowdown in improvements to certain age-related diseases.

‘But underneath these headline rates lies another much deeper and more urgent scandal – the vast inequalities in life expectancy.

‘The most deprived group of men live nine fewer years than the least deprived. And despite living less long, this group spends more time in poor health.

‘The reality is, the Government remains woefully unprepared for ageing. And we aren’t doing enough to tackle inequalities in life expectancy and healthy life expectancy.

‘Our social care system is failing older people whilst younger people are saving too little for old age. A growing older population ought to be good news for individuals and society – but to realise that the Government must invest more in tackling inequalities.’