The real reason you should stop eating lunch at your desk

My first job in journalism was as a clerk in the Wyandotte County bureau for the Kansas City Star, back when the daily was still an afternoon newspaper. Clerking was one of those entry-level journalism gigs that had few perks but endless amounts of grunt work, all for (in my case) the poverty-level wage of $1,000 a month. 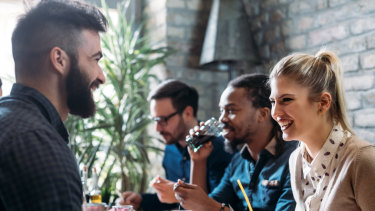 There’s something valuable about truly connecting with your colleagues over lunch.Credit:iStock

I loved that job, less for the work than for the people I worked with. I'm still friends with some of them. Our bond has survived more than three decades and countless moves across the country. I'm convinced that one of the things that forged our bond – other than the happy hours, the Kansas City Royals baseball games and the brutal late-morning deadlines – was our semi-regular lunches together.

After our stories cleared the editors in the early afternoon, we would assemble at, say, a local Tex-Mex restaurant and feast on combo plates and enjoy a cold bottle of Mexican lager, with a wedge of lime shoved down its throat.

Those kind of afternoon lunches have all but disappeared, sucked into some malevolent black hole created by corporate downsizing, email culture and the endless stupefaction of the internet. I am as guilty as the next cubicle drone who claims he has no time for such midday munching.

I recently put the question out there on Twitter: Do you eat lunch at your desk? If so, why? The nearly 50 responses were telling. By a margin of 2 to 1, people said they ate at their desks. Their reasons were typically one of the following: They want to leave work before 5 p.m., and lunching in place allows them to do so without guilt. They want to eat something healthier than the average restaurant meal. They're too busy to take a break. They want to catch up on the news while noshing on a sandwich. They're afraid they'll miss something important.

Those kind of afternoon lunches have all but disappeared, sucked into some malevolent black hole created by corporate downsizing.

Their answers line up with the contemporary thinking about the hazards of dining at your desk, much of which is focused on mental health, overeating, productivity or the filthiness of your actual work area. (Here at The Washington Post, we were recently informed that our crumb-laden desks are attracting cockroaches, which is just awful. Cockroaches never pack their own lunches.)

In other words, the rationale for abandoning your desk for lunch often revolves a

I think Stalin would approve the message: We smite the lazy workers!

I would like to suggest a gentler reason for exiting the building for lunch: Your friends and co-workers need you, and you need them.

Don't get me wrong. The internet is great for paying bills and looking like you're busy. But it's not so great for making connections, despite the implied promises of Facebook, Twitter, Instagram, blah, blah, blah. Much has been written about the association between internet usage and social isolation and depression. I'm not about to feign expertise in these matters. I'm just going to tell you what's true for me: I feel a whole lot better when I'm connected with friends and co-workers, not with my phone or computer.

I would like to suggest a gentler reason for exiting the building for lunch: Your friends and co-workers need you, and you need them.

I feel better when I hear a friend laugh or sense the affection in a friend's words, the unmistakable comforts of the human voice. I feel better when the world does not revolve around the next email or pop-up notification.

Perhaps this is more personal for me than it is for you. As a child who spent most of his time alone, I'm vulnerable to the false companionship of the internet. I made a promise to myself, and others, to talk publicly about depression. If you ask me, one of the best ways to confront depression, or even just a blue mood, is to step away from your computer and have lunch with a friend.

Who knows? Maybe 30 years from now, they'll still be your friends, like my old colleagues from the Kansas City Star.