Home » Health News » This City’s Overdose Deaths Have Plunged. Can Others Learn From It?

This City’s Overdose Deaths Have Plunged. Can Others Learn From It?

DAYTON, Ohio — Dr. Randy Marriott clicked open the daily report he gets on drug overdoses in the county. Only one in the last 24 hours — stunningly low compared to the long lists he used to scroll through last year in a grim morning routine.

“They just began to abruptly drop off,” said Dr. Marriott, who oversees the handoff of patients from local rescue squads to Premier Health, the region’s biggest hospital system.

Overdose deaths in Montgomery County, anchored by Dayton, have plunged this year, after a stretch so bad that the coroner’s office kept running out of space and having to rent refrigerated trailers. The county had 548 overdose deaths by Nov. 30 last year; so far this year there have been 250, a 54 percent decline.

Dayton, a hollowed-out manufacturing center at the juncture of two major interstates, had one of the highest opioid overdose death rates in the nation in 2017 and the worst in Ohio. Now, it may be at the leading edge of a waning phase of an epidemic that has killed hundreds of thousands of people in the United States over the last decade, including nearly 50,000 last year.

For the first time in years, the number of opioid deaths nationwide has begun to dip, according to preliminary data from the Centers for Disease Control and Prevention — with totals for the preceding 12 months falling slightly but steadily between December 2017 and April 2018. The flattening curve — along with declining opioid prescription rates and survey data suggesting far fewer Americans tried heroin last year and more got addiction treatment — is the first encouraging news in a while.

While it’s too soon to know if the improvement is part of a long-term trend, it is clear there are some lessons to be learned from Dayton. The New York Times spent several days here interviewing police and public health officials; doctors, nurses and other treatment providers; people recovering from opioid addiction and people who are still using heroin and other drugs.

They point to a variety of factors they believe have contributed to the sharp drop in mortality. 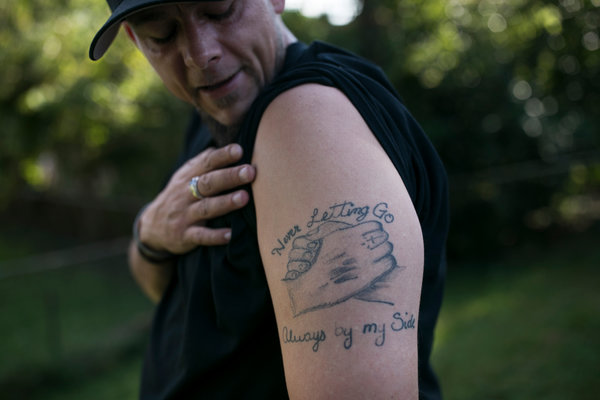 Mayor Nan Whaley thinks nothing has had as big an impact on overdose deaths as Gov. John Kasich’s decision to expand Medicaid in 2015, a move that gave nearly 700,000 low-income adults access to free addiction and mental health treatment.

In Dayton, that’s drawn more than a dozen new treatment providers in the last year alone, including residential programs and outpatient clinics that dispense methadone, buprenorphine and naltrexone, the three medications approved by the F.D.A. to treat opioid addiction.

“It’s the basis — the basis — for everything we’ve built regarding treatment,” Ms. Whaley said in an interview at City Hall. “If you’re a state that does not have Medicaid expansion, you can’t build a system for addressing this disease.”

An event held every other month at a church in Dayton’s East End shows the scope of available options. Called Conversations for Change, it gives people addicted to drugs a chance to have a meal and to meet treatment providers, who on a recent evening had set up more than a dozen tables.

“We have medication-assisted treatment programs, withdrawal management — come see me,” a representative for one program, Project Cure, urged the two dozen people present.

“If you’re interested in Narcan training, we’re going to get started in a few minutes — you can bring your food with you,” offered a representative of another program.

Gov. John Kasich has said the state is spending $1 billion a year to address the opioid epidemic, and a big chunk of that is Medicaid funds. With Medicaid now paying for nearly all low-income residents who need it to get addiction treatment, Ohio has been able to go beyond the basics in spending its share of several billion dollars in the opioid grant money the Trump administration has been giving to states. One example: paying for people who go to jail and lose their Medicaid coverage to stay in treatment with their regular provider while they’re incarcerated.

It’s entirely possible that the biggest factor in Dayton has been the dwindling presence on the streets of carfentanil — an analog of the synthetic opioid fentanyl that the C.D.C. describes as 10,000 times more powerful than morphine. Ohio was particularly hammered by carfentanil in recent years; according to the C.D.C., the state had 1,106 carfentanil-related deaths from July 2016 through June 2017, compared with only 130 in nine other hard-hit states combined.

During that period, carfentanil was showing up regularly in Dayton’s street drugs, including methamphetamine, cocaine and fentanyl. Nobody has figured out why Ohio saw more of it than anywhere else, but there’s no question it played a huge role in the explosion of deaths in Dayton early last year.

By mid-2017 carfentanil’s presence was fading — maybe in part because traffickers realized how much of their customer base it was killing, said Timothy Plancon, the Drug Enforcement Administration special agent in charge of Ohio.

The news is not all good. Cocaine and particularly meth use is rising fast in the Dayton area, as it is nationwide. And they’re often mixed with fentanyl; 77 percent of the overdose deaths in Montgomery County from January through April involved fentanyl, roughly the same as during the same period last year. The national data also suggests overdoses involving fentanyl continue to rise, along with those involving cocaine and meth, while deaths involving heroin and prescription drugs are falling slightly.

Since late summer, deaths in Montgomery County have come closer to matching the same period last year — a reminder that the battle is far from over.

“I still go to more wakes than I care to tell you about,” said Lori Erion, the founding president of Families of Addicts, a local support group. “Have we got this beat or licked? Absolutely not, on any level.”

By now, most Americans have heard of naloxone — also known by the brand name Narcan — the medication that reverses opioid overdoses if administered quickly enough, by injection or nasal spray. But few Americans cities have blanketed their neighborhoods with naloxone like Dayton has.

Montgomery County agencies distributed 3,300 naloxone kits last year, and are on course to more than double that number this year, holding trainings at treatment centers and 12-step meetings as well as at local businesses and schools.

Starting in 2014, Richard Biehl, the Dayton police chief, directed all his officers to carry naloxone — going against some of his peers in other Ohio cities, including a sheriff in a neighboring county who outright refused to equip his deputies with it. Some in Ohio and elsewhere continue to oppose so-called harm reduction tools like naloxone, saying they enable drug use, but the evidence is overwhelming that they save lives.

“We really jumped on it because we saw it as absolutely consistent with our public mission to save lives,” Chief Biehl said.

Research suggests he was right. A recent study from Stanford estimated that wider availability of naloxone could prevent 21,000 deaths over the next decade — more than expanding access to medications for addiction or reducing painkiller prescriptions could.

But as fentanyl analogs — whose chemical structure is slightly different and can be more lethal — started entering the drug supply in Dayton, it became harder to revive overdose victims with the standard dose of naloxone. So the city, with state support, has spent a lot more to provide higher doses — $350,000 last year.

The investment has paid off, said Helen Jones-Kelley, executive director of Alcohol, Drug Addiction and Mental Health Services for Montgomery County. “If nothing else, you get that second chance with them — and in some cases that third or fourth chance,” she said. “It gives people the opportunity to get connected to services, who would not otherwise have had that chance at life.”

There is more support for people when treatment ends

Even though there are many more treatment options here now, that doesn’t mean people stay in treatment as long as they should. But the city has an unusually large network of recovery support groups, including neighborhood clubs that provide space for Narcotics Anonymous meetings to Ms. Erion’s group, which has thousands of members in Montgomery and four surrounding counties.

Dayton is also investing heavily in peer support — training people who are far enough along in their recovery to work as coaches or mentors for others who are trying to stop using, including in emergency rooms.

One example is an initiative called G.R.O.W. — Getting Recovery Options Working — that dispatches teams of social workers, medics, police officers and people in recovery to homes of people who have recently overdosed. The teams offer to help them get into treatment and to drive them to a program. They also supply them and their families with naloxone to have on hand in case it’s needed.

“I just stop and plant a little seed,” said Darcy Shepherd, a peer supporter who went through treatment for opioid addiction almost five years ago. “I will pull up to them, ask how they are doing and if they are ready for treatment, and when they are, to give me a call.”

Joshua Lewis, 37, is among those who have managed to stay alive long enough to benefit from recovery supports. He overdosed repeatedly last year on heroin and fentanyl, while also using meth. His girlfriend found him a bed at a local treatment center, after which he spent three months at Joshua Recovery Ministries, a religious program that provides housing for men recovering from addiction. He learned how to read there, he said, and is now training to become a peer supporter. He doesn’t use medications for addiction but said he would not discourage others from doing so.

“There are more addicts coming out of the shadows,” he said. “The stigma’s being broke.”

When Sam Quinones, the author of “Dreamland: The True Tale of America’s Opiate Epidemic,” testified before Congress earlier this year, he said that “the more cops and public health nurses go out for a beer, bridge that cultural chasm between them,” the better chance the country had at solving the problem.

Dayton has largely succeeded at bridging that chasm, which too often pits a punitive, abstinence-only approach to addiction against one that seeks to reduce deaths by any means possible. Law enforcement and public health representatives work hand in hand on a two-year-old Community Overdose Action Team, sharing data and strategizing with dozens of local organizations. Chief Biehl was fully supportive of the city’s decision to set up a syringe exchange in 2014. Research has consistently found that such programs, which allow people who inject drugs to trade dirty needles for clean ones, prevent deaths related to infections like H.I.V., hepatitis C, and endocarditis.

While other cities, including Charleston, W. Va., and Santa Ana, Calif., closed their needle exchanges this year because of opposition, including from the police, Dayton’s program continues to operate at two sites, each open once a week. The needle exchanges also help clients sign up for Medicaid and connect them with addiction treatment.

The city secured a federal grant for a pilot program that distributes fentanyl test strips, which can be used to check street drugs for the presence of various fentanyl analogues. Only a handful of cities are sanctioning the test strips at this point. Sheila Humphrey, the Dayton director for Harm Reduction Ohio, a nonprofit group, has given out thousands of strips, often at parks and community events.

“If it’s about conserving and protecting life” Chief Biehl said, “it has to be considered as an option.”