Trans benefits application has over a HUNDRED genders and pronouns

EXCLUSIVE: Xenogender, gender outlaw and genderf****: San Francisco’s $1,200-a-month handout to low-income trans people tells them to choose from 134 genders and pronouns (and they can pick as many as they want)

The Democrat-run city is the second in America to offer targeted benefits specifically for residents who are transgender and make less than $600 a month.

Those who want to apply for the guaranteed $1,200-a-month package can fill out a 10-page form online which asks about contact details, income and social security.

But they are also invited to choose between 97 genders, 18 pronouns and 19 options for sexual orientation and told to ‘check all that apply’.

Among the options listed are ‘xenogender’ – a gender ‘beyond human understanding’ – and ‘genderf*** — someone who purposefully sends mixed messages about their sex.

‘Novigender’, which refers to someone who believes their gender identity is so complex it cannot be described using existing categories, is also an option. Also an option is ‘FTX’, which stands for ‘female-to-eXpansive’ — a person assigned female at birth who identifies as non-binary.

Jay Richards, from the right-wing Heritage Foundation, told DailyMail.com: ‘Gender ideology is overrunning our culture, and vastly amplifying the number of minors and adults who suffer from gender dysphoria and gender confusion.’

He said: ‘Expect a growing population of needy, indigent people in San Francisco presenting as transgender.’ 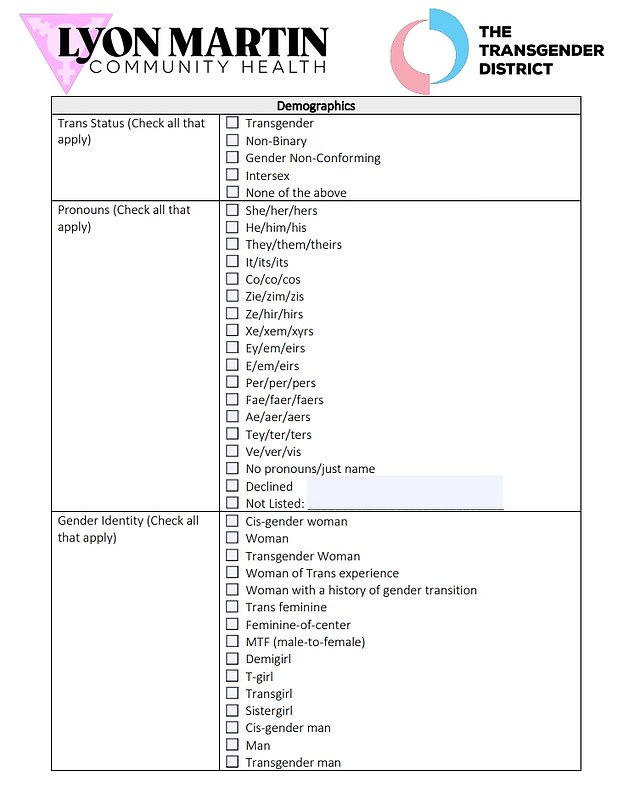 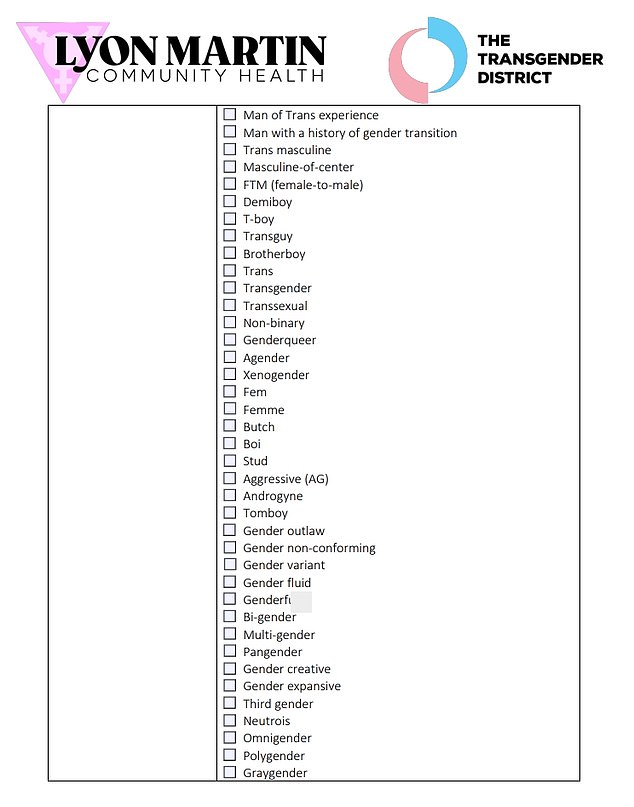 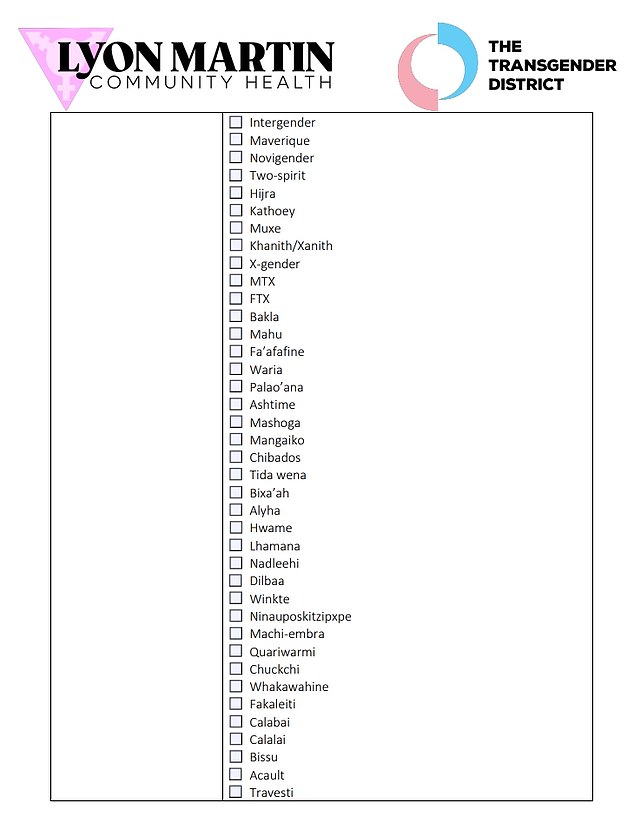 Figures show that a third of transgender adults in the Californian city are in poverty compared to 12 percent in the general population.

The program guarantees low-income transgender people $1,200 per month for 18 months.

Identifying as trans is enough to qualify, and applicants do not need to have had surgery.

The mayor’s office said that the money will be unconditionally given to 55 households that qualify.

According to the program’s website, applicants must be older than 18 years old, earn less than $600, live in San Francisco County and be willing to participate in surveys during the 18-month period.

It was designed as a collaboration between the mayor’s office, and the Transgender District and Lyon-Martin Community Health Services, and was first mooted in July 2021.

Palm Springs’ launched a similar scheme earlier this year, where it allocated $200,000 in guaranteed income for the desert community’s transgender and nonbinary residents.

The mayor’s office has allocated $2 million over two years for the program which was included in the budget for the Mayor’s Office of Housing and Community Development. 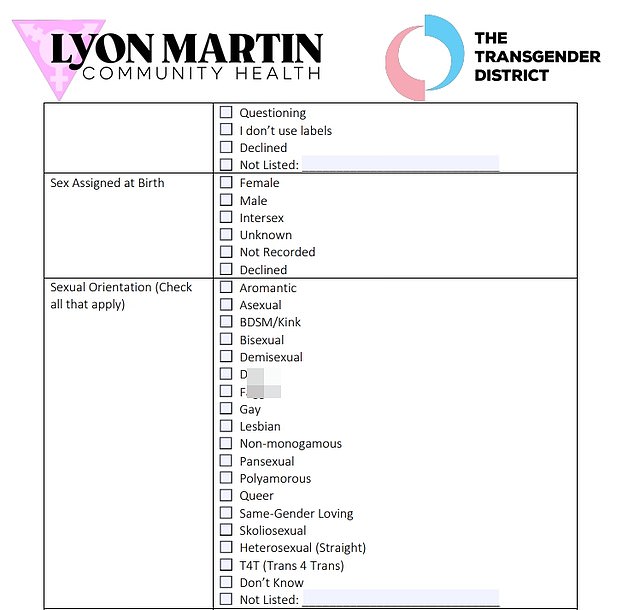 A total of 19 sexual orientation options are listed in the application, including the derogatory terms ‘d***’ and ‘f*****’

In a statement, Transgender District President Aria Sa’id said: ‘By giving low-income trans people the resources to cover the expenses they deem most immediate and important given each person’s unique situation, we are implementing a truly community-centered intervention to combat poverty.’

The program differs from the city’s other charitable efforts in that it places no limitations on what recipients can spend their money on, reports KRON.

In addition to the money, those who qualify can also receive gender-affirming medical care, treatment for mental health issues and financial advice.

It is not clear if this is for free.

Applications for the program began on November 15 and close on December 15.

The mayor said: ‘Our Guaranteed Income Programs allow us to help our residents when they need it most as part of our city’s economic recovery and our commitment to creating a more just city for all.’

Breed continued: ‘We know that our trans communities experience much higher rates of poverty and discrimination, so this program will target support to lift individuals in this community up.’

Paul Crego, the director of the San Francisco Office of Transgender Initiatives, said: ‘Even with our rich history of trans advocacy, we see that trans San Franciscans experience poverty at exponentially higher rates compared to the general population.’

Speaking to the San Francisco Standard, the executive director of LGBTQ community service provider Roger Doughty, said: ‘There has been some important and courageously won progression in recent years.’

The GIFT program is the third of its kind to be launched in San Francisco, following on from a guaranteed income program for artists and a program for mothers and pregnant women of black and Pacific Island descent.

The latter offered $1,000 to qualifying residents.

Two further programs are slated for launch in 2023 that will target the city’s youth community.

The program’s launch comes as crime continues to spiral in the Bay Area.

Per San Francisco Police Department statistics, larceny thefts are up 13.2 percent over last year, while robberies are up 5.4 percent and assaults are up 9.6 percent. 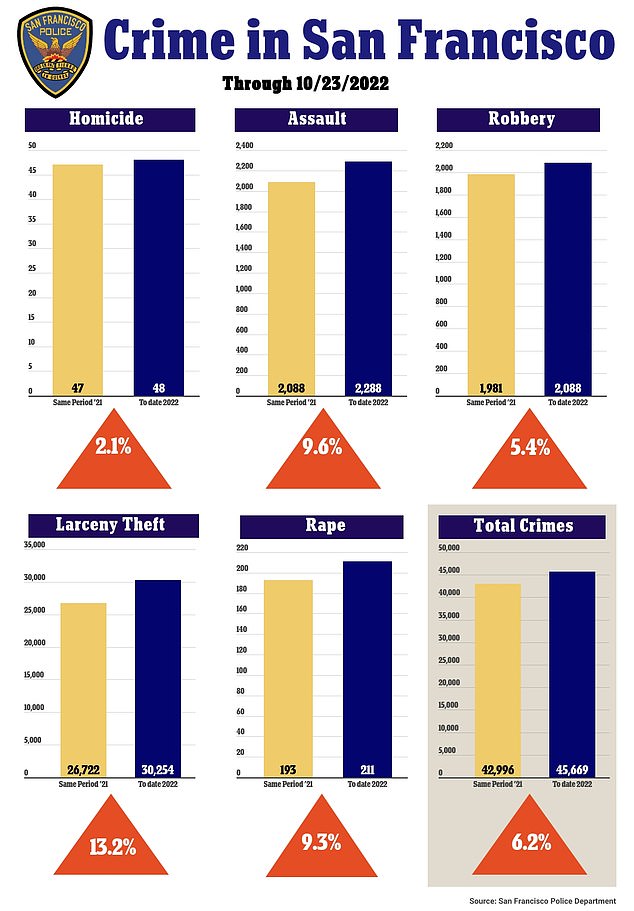 Crime in the iconic city is now up 6.2 percent from last year, driven primarily by a 13.2 percent increase in the number of thefts 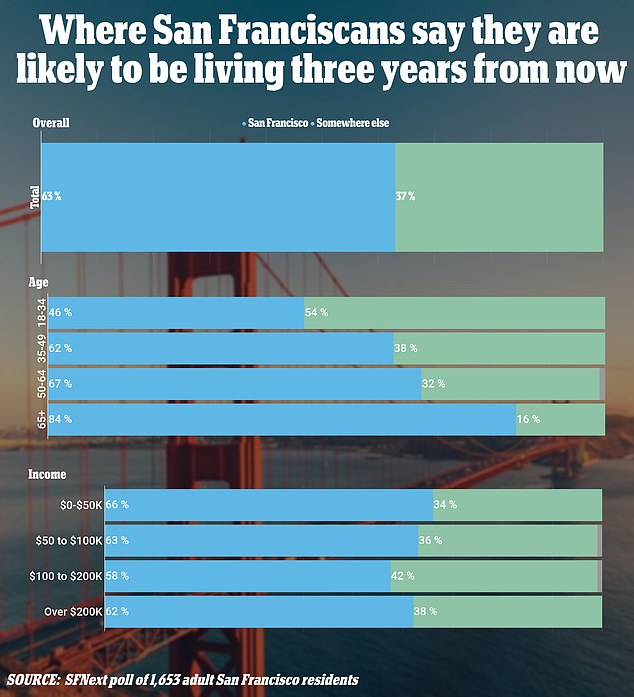 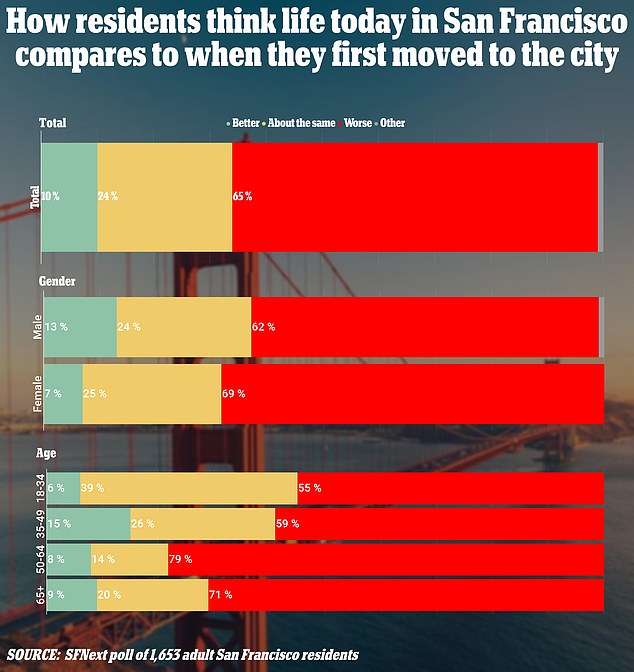 Some residents revealed last month that they are now arming themselves with baseball bats and stun guns after a new drug rehabilitation facility drew violent addicts to a previously peaceful neighborhood.

Residents of the SoMa neighborhood in northeast San Francisco have said that ever since the SoMa RISE drug sobering center opened in June, ‘troublemakers’ have plagued the neighborhood.

They told Fox News that rather than tempering drug usage, the center has done little more than draw heavy users to the neighborhood.

‘They’re letting their clients come out here and get high, go inside and get sober and then get high again,’ Sackett told ABC7 of the facility that Mayor Breed’ office originally categorized as a ‘safe indoor space’ for addicts to ‘get off the streets.’

Officials are now said to be looking for other ways to deal with the growing drug problem plaguing San Francisco streets — without sending drug users to prison.

Meanwhile, a recent survey conducted by the San Francisco Chronicle found that two-thirds of San Francisco residents say their city is going downhill.

A third also said they plan to leave the city within three years. 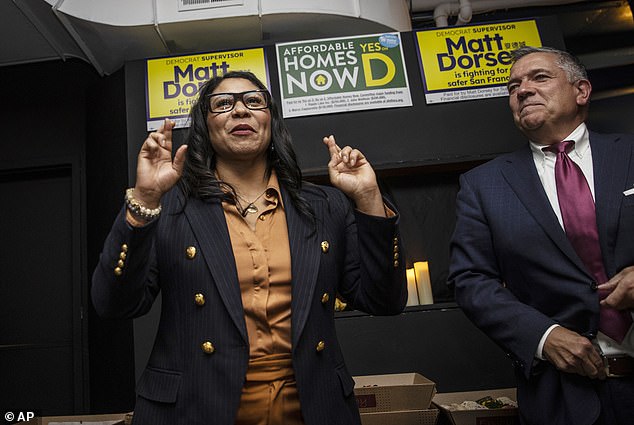 The survey of 1,653 adults found that 65 percent said the city was declining, while 37 percent said they would live elsewhere in three years. A staggering 84 percent of people aged 65 and over said they are planning to leave.

One respondent, Dae Echols, 53, told The Chronicle he was ‘fed up with the city’ and rising prices would likely force him to retire elsewhere. The average rent in San Francisco has risen to $3,750 per month.

‘I just remember the hippie generation, and it was all about, take care of your friends, brotherly love. And that is totally gone,’ said Echols.

Other residents hit out at Mayor Breed, whose earlier popularity for steering the city through the pandemic appears to have waned amid widespread homelessness, property crime, the fentanyl epidemic and other woes.

Some 35 percent said Breed had done a poor or very poor job at making San Francisco a better place to live and work these past three years, while 42 percent said she’d done a fair job and 23 percent an excellent or good job.

The survey was conducted after the recall election of progressive District Attorney Chesa Boudin, who was ousted in June amid frustration over public safety in the deeply Democratic city.

At least 32 transgender people have been murdered since 2022, according to a report by the Human Rights Campaign (HRC).

This means violent deaths recorded by the HRC group in the past 10 years have reached over 300.

Their annual report, released Wednesday, said a minimum of 302 transgender people were killed in the US since 2013.

Over 85 per cent of victims killed were people of color.

And over three-quarters were below the age of 35.

Meanwhile, the amount of transgender people killed over the past four years has almost doubled.

The report’s release aligned with Transgender Awareness Week, which started November 13 and ends on November 20, Transgender Day of Remembrance.

Tori Cooper, director of community engagement at the HRC’s Transgender Justice Initiative, said: ‘The Transgender Day of Remembrance is a solemn tradition, a moment where transgender and non-binary people can gather together to mourn those lost and hope for a better future.’