Most people are aware that a lack of sleep can wreak havoc on one’s day. Feelings of exhaustion, lack of concentration and not being able to work efficiently are all side effects of not getting enough rest. However, lack of sleep could also put you at risk of developing type 2 diabetes. The body’s reaction to sleep loss can resemble insulin resistance, a precursor to diabetes.

According to the BNF’s task force report, “Cardiovascular disease: diet, nutrition and emerging risk factors” published earlier this year, highlighted that lack of sleep, and interrupted sleep may be linked to an increased risk of heart disease, stroke, type 2 diabetes and hypertension.

Sleep deprivation is an often overlooked but major risk factor for type 2 diabetes.

Diabetes and sleep problems often go hand in hand and there is evidence that not sleeping well can increase your risk of developing diabetes.

The reason behind this is that when a person is suffering from sleep deprivation the hormone’s in their body becomes erratic.

Ongoing sleep deprivation means that less insulin is released in the body after you eat. With the lack of insulin, so the stress hormones are released and makes it even harder for insulin to do its job effectively.

The increase of glucose in the bloodstream could increase your risk of developing type 2 diabetes. 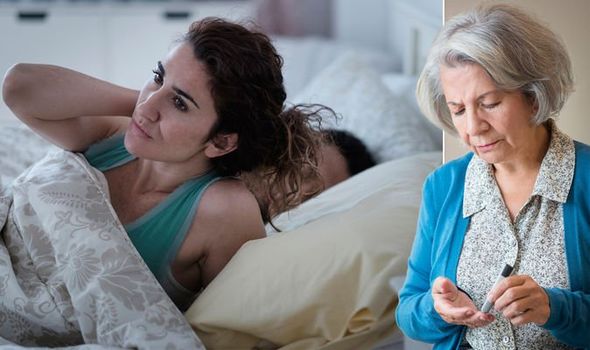 Doctor Lucy Chambers, senior scientist at BNF said: “The implications of a bad night’s sleep can go much further than feeling tired.

“Where lack of, and disturbed sleep can lead to both adults and young people feeling grumpy and irritable, regular poor quality sleep can have a negative impact on dietary choices, including higher intakes of calories and more frequent snacking on less healthy foods.”

The National Sleep Foundation recommends that adults aged 18 to 64 years should be getting between seven to nine hours sleep a night.

For those getting less than that, overeating also becomes a negative side effect of sleep deprivation.

Dietician Chloe McLeod explains that when you’re tired higher levels of grehlin, known as the hunger hormone, is released, while leptin, the hormone that tells you when you have had enough food, is lowered.

Other risk factors of type 2 diabetes:

Healthy lifestyle choices and ensuring you get enough sleep are major ways to reduce your risk of developing type 2 diabetes.

When we get enough sleep we will crave less ‘bad’ food and will be more inclined to exercise.