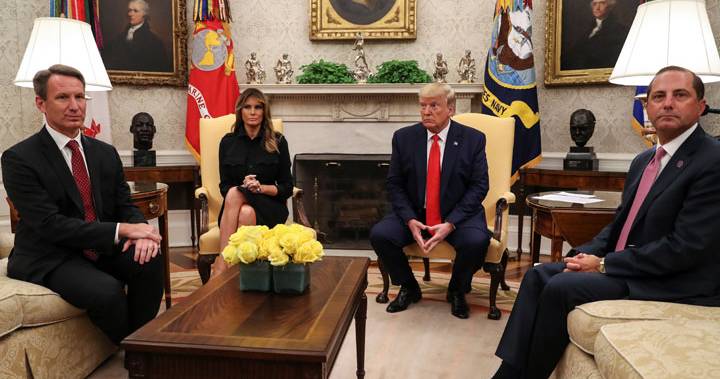 U.S. President Donald Trump told reporters on Wednesday that the country has a problem with vaping, and his top health official said the Food and Drug Administration intends to remove all flavored e-cigarettes from the market.

‘It is time to stop vaping’: 6th U.S. death linked to vaping-related illness

Health and Human Services Secretary Alex Azar told reporters at a meeting with Trump in the Oval Office that children were becoming addicted to nicotine thanks to attractive flavors of e-cigarettes, and that the FDA was working on a “guidance document” that would lead to a ban of all vape flavors aside from tobacco flavoring.

“Once the FDA would finalize this guidance, we would begin enforcement actions to remove all such products from the market place,” Azar said.

Six deaths have been linked to vaping and U.S. public health officials are investigating 450 cases of potential vaping-related lung illness across 33 states and one U.S. territory.

“We have a problem in our country, it’s a new problem … and it’s called vaping,” Trump said. “Especially vaping as it pertains to innocent children.”

The nationwide investigation led by the U.S. Centers for Disease Control and Prevention and the U.S. Food and Drug Administration has not definitively linked the illnesses to any specific e-cigarette product or ingredient, although health officials have expressed suspicions about the effects of inhaling vitamin E acetate, which is contained in some vaping products.

The FDA has urged consumers to avoid inhaling vitamin E acetate, buying vaping products on the street, using marijuana-derived oil with the products or modifying a store-bought vape product.