Home » Health News » Where ‘Yes! To Affordable Groceries’ Really Means No to a Soda Tax

Where ‘Yes! To Affordable Groceries’ Really Means No to a Soda Tax

SEATTLE — Standing in a supermarket produce aisle, her face shadowed with dread, the middle-aged woman speaks directly to the camera and makes a plea for common decency.

“We should not be taxed on what we eat,” she says in a commercial that is being broadcast across Washington State. “We need to eat to survive, and if we have to cut back on what we eat, that’s not going to be good — especially for the elderly.”

In the run-up to Election Day, residents of Washington and Oregon have been bombarded with similar messages from groups with names like Yes! To Affordable Groceries. The organizations have spent more than $25 million on commercials that feature plain-spoken farmers and penny-pinching moms urging support of ballot measures that would prohibit municipalities from taxing food sales.

But what most voters don’t know is that Coca-Cola, PepsiCo and other American beverage companies are largely financing the initiatives — not to block taxes on staples like milk and vegetables but to choke off a growing movement to tax sugary drinks.

At a time of soaring childhood obesity, and with more than one in three adults overweight, health advocates say that soda taxes are an effective way to dampen consumption of sugar-sweetened beverages. Nearly 40 countries now have them, along with seven cities in the United States, including Philadelphia, San Francisco and Boulder, Colo.

Towns and cities across the country have been mulling similar moves as a way to reduce sugary drink sales while raising revenue for programs that aim to blunt the public health impact of heart disease, hypertension and Type 2 diabetes, conditions that have been linked to diets heavy in sugar. 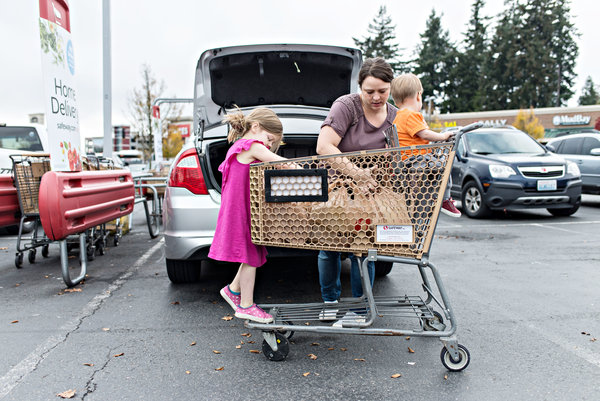 Now the nation’s soda giants have turned to a new tactic to fight them: pushing sweeping ballot measures and statewide legislation that would permanently deny municipalities the ability to impose taxes on a broad range of goods and services. The initiatives are packaged and sold as citizen revolts against tax-happy politicians. None of them explicitly mention soda taxes.

Opponents of the measures say they are fundamentally misleading because neither Washington nor Oregon has a plan to tax groceries. “No one is even talking about taxing food,” said Jim Krieger, a professor of medicine and health services at the University of Washington. “This is simply the soda industry trying to protect its profits at the expense of public health and local democracy.”

The industry has momentum — and money — on its side. Here in Washington, the industry has spent over $20 million to promote Initiative 1634, according to state finance filings. Those fighting the ballot measure have raised $100,000.

Starting last year, legislatures in Michigan, Arizona and California passed laws that pre-emptively bar local governments from imposing such taxes in the future. The outcome in Oregon and Washington, political analysts say, could determine the future of the country’s soda tax movement by encouraging soda companies to embrace ballot measures in states across the country.

“It’s a pivotal moment,” said Mark Pertschuk, director of the advocacy group Grassroots Change. “It’s hard to overstate the chilling effect of having soda taxes barred from the whole West Coast, where so many progressive policies are born.”

Opponents of the approach criticize it as overreach. The Oregon initiative, for example, takes the form of a constitutional amendment and critics say it is so vaguely worded that it could be used to block future taxes on restaurant meals, electronic cigarettes, catering halls and trucking companies that transport McDonald’s Happy Meals.

“These pre-emptive measures undermine democracy and completely take away a local government’s ability to do what’s best for their communities,” said Jennifer L. Pomeranz, a professor of public health at New York University. “It’s a true corporate takeover of America.”

William Dermody, a spokesman for the American Beverage Association, the industry group backing the measures, countered that referendums are by their very nature democratic. Most voters, he said, don’t want taxes on the items they put in their shopping carts — soda included. “We believe there is a better way to help people reduce the amount of sugar consumed from beverages and bring about lasting change, including working alongside the public health community and offering more low- and no-sugar options,” he said.

Public health studies that have assessed the impact of soda taxes have found a significant drop in soda consumption, including 21 percent in Berkeley, Calif., and 40 percent in Philadelphia.

“We know that even modest soda taxes work,” said Laura MacCleery, policy director at the Center for Science in the Public Interest. “Because they work, soda companies fight the taxes tooth and nail.”

But critics say such taxes hurt small businesses and have an outsize impact on the poor.

“Thousands of good wage jobs are tied to the food and beverage industry, and the taxes are regressive because they take money out of the pockets of folks least able to afford them,” said Peter Lamb, a senior official for Teamsters Local 174 in Tukwila, Wash., which is championing the ballot measure.

The strategy of pushing pre-emptive laws and ballot measures was pioneered four decades ago by the tobacco industry and the National Rifle Association as a way to stop localities from passing antismoking ordinances or limitations on gun ownership. The N.R.A. has been wildly successful, with 43 states now barring enactment of any restrictions on firearms.

Although nearly all of Washington’s major newspapers have come out against the grocery tax ballot measure, neither side has a decisive lead, according to polling. But interviews with voters suggest the soda industry’s efforts to conceal its involvement are working. At a Safeway supermarket in Burien, a Seattle suburb, most shoppers expressed enthusiasm for the initiative.

“For those of us who are struggling to get by, the last thing we need is a tax on food,” Mallory Brumfield, 31, a preschool aide, said as she shopped for groceries at a Safeway supermarket with her two children in tow.

Like many shoppers, Ms. Brumfield was surprised to learn that Coca-Cola, Pepsi and the Dr Pepper Snapple Group have provided the lion share of money to promote the measure. “Knowing that kind of gives me pause about whether I should support it,” she said.

In Oregon, the grocery tax ballot, known as Measure 103, has been met with more public skepticism, largely because it involves a change to the state constitution. Opponents of the measure have raised more money than in Washington, around $2.6 million, including an infusion of $1.5 million last week from former Mayor Michael R. Bloomberg of New York. The group backing the measure, Yes! Keep Our Groceries Tax Free!, has raised over twice that amount, with donations evenly split between soda companies and supermarket chains.

Critics accuse the Yes on 103 campaign of spreading misinformation, citing a television ad that claimed the initiative would prevent levies on food pantries. “There is no universe in which food banks are going to be taxed,” said Matt Newell-Ching, public affairs director at Partners for a Hunger-Free Oregon, an advocacy group. “It’s like saying, ‘Vote for this measure and the sky will continue to be blue.’”

Last year, Seattle became the first city in the Pacific Northwest to enact a tax on sugary beverages, and it would be allowed to remain in place should the ballot measure pass. The tax is expected to generate $20.6 million this year, money that will go toward early education and a raft of programs that give the working poor better access to healthier foods.

Sarah Wandler, a social worker at the Odessa Brown Children’s Clinic, said soda tax revenues have provided 300 families at the clinic with vouchers to buy fresh produce at farmers’ markets and corner stores. “Our clients all report having healthier foods in the house, and they are trying fruits and vegetables they never had before,” she said.

State Senator Reuven Carlyle, a Democrat, is pessimistic about the prospects for defeating the proposal, but he takes the long view, citing the decades-long fight against Big Tobacco that eventually changed national attitudes.

“At the end of the day,” he said, “you can’t bury the truth, because let’s be honest: No one on the planet believes that soda is groceries.”