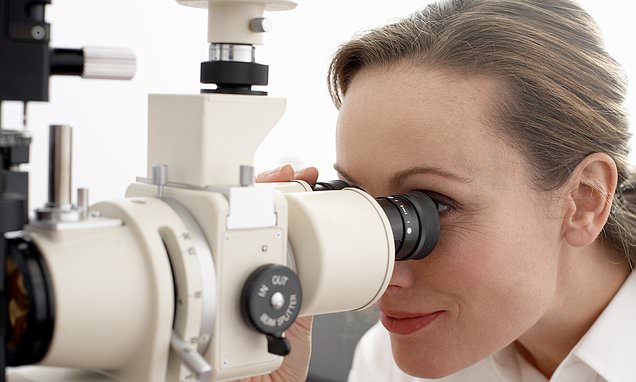 Britain’s obesity epidemic strikes again: Why patients in their 40s and 50s are losing their sight to cataracts

Arthritis, dementia, osteoporosis – just some of the illnesses we tend to associate with being elderly, and conditions most of us need not worry about until we reach our twilight years. Traditionally, cataracts have always fallen into that category too.

But leading British eye specialists are reporting a worrying increase in the number of cataract cases among people in their 40s and 50s – a good 20 years or more before they usually develop.

Cataracts are caused when proteins in the lens of the eye start to clump together, leading to clouding of the eyes. 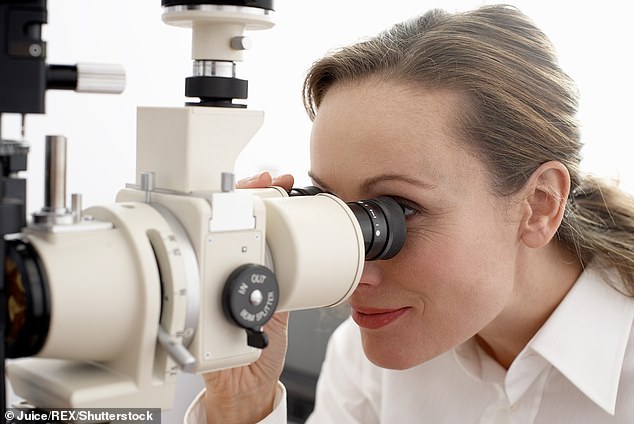 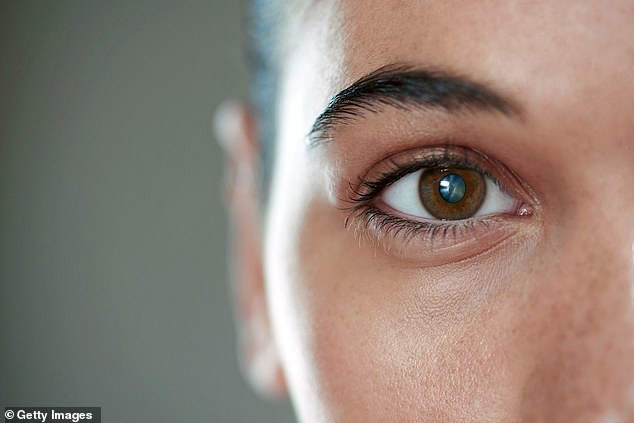 Cataracts are caused when proteins in the lens of the eye start to clump together, leading to clouding of the eyes

About 2.5 million people aged 65 and over in England and Wales are thought to have some form of vision impairment caused by them.

But while the average age of patients undergoing cataract surgery (where an artificial lens is used to replace the diseased one) is still 76, doctors are reporting anecdotal evidence of patients developing problems much earlier in life.

‘There is no doubt more people in their 40s and 50s are undergoing cataract surgery than in the past,’ says Professor David Gartry, consultant ophthalmologist at Moorfields Hospital in London, one of the country’s leading eye-care centres.

Prof Gartry, who has performed about 15,000 cataract surgeries over his 30-year career, adds: ‘A man I recently saw was in his 40s and fit and healthy.

‘He had been referred to me by an optician because he was having problems driving at night.

‘Bright lights from traffic bothered him, and he told me he was seeing halos around street lamps.

‘These are classic early symptoms of cataracts, and tests revealed signs of them in both of his eyes.

‘Although he didn’t need an operation straight away, he will do within about five years as the condition is progressive.’

A 2015 audit by Optegra Eye Health Care, which carries out eye surgery privately, found that a fifth of cataract enquiries were from people in their 40s and 50s.

So what’s causing this largely age-related condition to strike much earlier?

One disturbing theory is that Britain’s epidemic of type 2 diabetes may be partly to blame, endangering the eyesight of millions of Britons with the disease.

Diabetes is already associated with a high risk of blindness. But this is usually in the context of the type 1 version, which affects about 400,000 people in the UK.

These patients can develop a blinding condition called retinopathy, where the retina at the back of the eye is damaged by the effects of the disease on circulation. But the numbers that could be affected by cataracts are much greater as type 2 diabetes rates have doubled in the past 20 years, due largely to the surge in obesity. 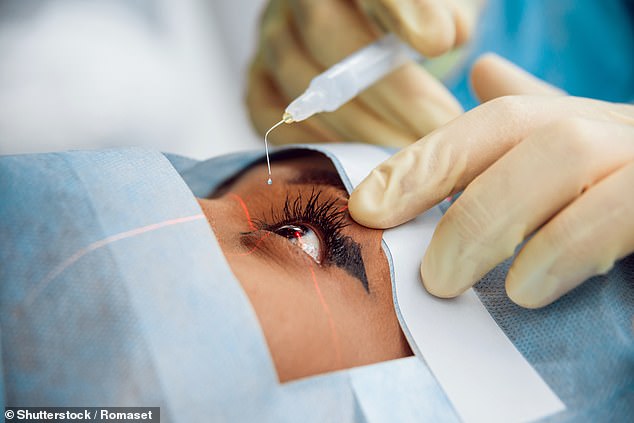 Dan Howarth, head of care at the charity Diabetes UK, says: ‘Diabetes is one of the key risk factors that can result in developing cataracts’

Dan Howarth, head of care at the charity Diabetes UK, says: ‘Diabetes is one of the key risk factors that can result in developing cataracts.

‘In fact, people with diabetes double their risk of developing cataracts and may develop them earlier in life.

‘This is because people who have higher blood sugar, as in diabetes, also have higher sugar concentrations in the other fluids of their bodies, including the aqueous humour, the jelly-like substance inside the eye.

‘This can lead to the formation of a cataract.’

A 2014 investigation by scientists at Capital Medical University in Beijing pooled data from eight studies, involving more than 20,000 patients, on type 2 diabetes and the risk of cataracts, to try to reach a firm conclusion on the dangers.

It found that the risk of cataracts was up to 68 per cent greater in type 2 patients compared to volunteers without the condition.

Jaswinder Kalsi, 61, a mother- of-three from Hayes in Middlesex, had cataract surgery in her right eye in 2016. She was first diagnosed in her early 40s, and had suffered type 2 diabetes since her 20s.

She says: ‘I was shocked when I was diagnosed with a cataract so young. My eyesight gradually got worse until it was like looking through net curtains.’

Surgery helped, but her vision is still reduced and Jaswinder has stopped driving at night.

Diabetes may not be the only modern risk factor driving up cataract rates – sunlight could be a danger too. Scientists at Case Western Reserve University in Cleveland, Ohio, published a study in 2014 showing that UVA rays from the sun triggered harmful reactions in the lenses of the eye, known as protein glycation, leading to cloudiness.

Some professionals such as airline pilots suffer disproportionately from cataracts because of chronic exposure to UV rays. And a 2016 study by the Boxer Wachler Vision Institute in Beverly Hills, California, found that owners of left-hand-drive vehicles were more at risk of cataracts in their left eye than their right. The reason? Windscreens on most cars are impregnated with a chemical that protects against UVA exposure, but side windows often aren’t.

More recently, experts at the University of Minnesota studied nearly 45,000 indoor workers and found those exposed to the highest levels of UV light through windows were 16 per cent more likely to need cataract surgery than workers of the same age exposed to less light.

He says the apparent rise in middle-aged cataracts could be because patients are more aware of surgery and less tolerant of visual imperfections than in the past, and points out that surgeons’ threshold for when they decide to carry out surgery has gone down.

How to protect your vision from cataracts

Blurred vision, halos and light sensitivity may not appear until cataracts are well developed. So have an eye check every two years and annually after the age of 60. If they spot one, your optician can refer to you to an NHS specialist. Private clinics offer surgery for between £2,000 and £4,000 per eye. The NHS does more than 400,000 such operations a year.

Ophthalmologist Professor David Gartry says: ‘Cataract surgery is a safe procedure that can achieve dramatic improvement when cataracts have progressed enough to seriously impair vision and affect quality of life.’ 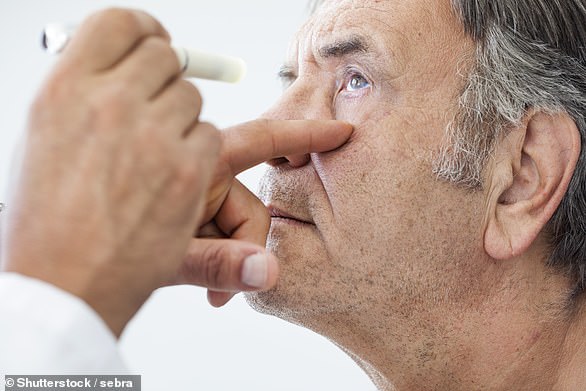 Blurred vision, halos and light sensitivity may not appear until cataracts are well developed. So have an eye check every two years and annually after the age of 60

Eat plenty of dark green leafy vegetables, as they contain antioxidants which may combat stress that damages cells in lens tissue. ‘When symptoms first appear, you may improve your vision for a while with new glasses or stronger lighting but your vision will gradually deteriorate over time,’ says Prof Gartry.

One of the most common types of cataract is called nuclear and starts in the centre of the lens. ‘An early sign of one is when a patient becomes more short-sighted after years of a steady prescription,’ says Prof Gartry. ‘That’s because the nucleus of the lens focuses the light more if it has a cataract in it.’