Excess deaths refer to the amount of patients that died unexpectedly, calculated by comparing the mortality rate from winter months to the rest of the year.

The shocking figures have been partially blamed on the deadly strains of flu that swept the nations over the colder months of December to March.

Statisticians  also blamed the ineffectiveness of the flu jab, with only 15 per cent who were given last year’s vaccine fully protected against the virus.

The Office for National Statistics figures show that the number of excess winter deaths were the highest in more than four decades – since 1975/76. 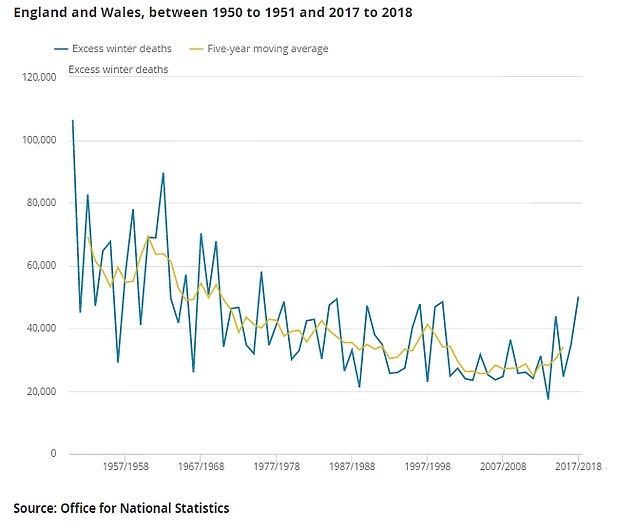 Figures show more than 50,000 people died last winter in England and Wales ‘because of the severe flu outbreak’. It is the highest record in almost 40 years. Graph showing the amount of excess deaths in England and Wales between 1950 to 1951 and 2017 to 2018 compared to a five-year average

Nick Stripe, head of health analysis and life events at the ONS, said: ‘It is likely that last winter’s increase was due to the predominant strain of flu, the effectiveness of the influenza vaccine and below-average winter temperatures.’

The figures showed that excess winter mortality in 2017 to 2018 significantly increased in just one year in all English regions and Wales, with Wales showing the highest figures.

The only day that didn’t exceed the daily death expectations was March 25.

The data, from the ONS, also shows more than a third (34.7 per cent) of the deaths were caused by respiratory diseases, with pneumonia and chronic obstructive pulmonary diseases accounted for the largest proportions.

Excess winter deaths continued to be highest among females and people aged 85 and over. Of the estimated number, 43.7 per cent were males and 56.1 per cent were females.

The authors suggest this may be explained by the higher proportion of females aged 85 years and over compared with males.

Mr Stripe says peaks like these are not unusual. He said: ‘We have seen more than eight peaks during the last 40 years.’

The most recent peak was observed in 2014 to 2015, when 27 per cent more people died in the winter months compared with the non-winter months. 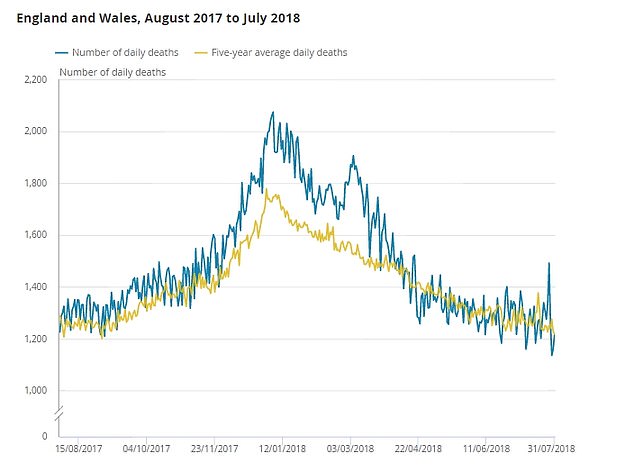 There are many different types of flu circulating around the world, but four main types are being seen in Britain this winter.

H3N2 – Dubbed ‘Aussie flu’ after it struck Australia hard last winter, this strain is more likely to affect the elderly, who do not respond well to the current vaccine. This is one of the most common strains seen so far this winter, with at least 63 confirmed cases seen in official laboratories.

H1N1 – This strain – known as ‘swine flu’ – is generally more likely to hit children, who respond well to vaccination. This has been seen nearly as often as H3N2 so far this year, with at least 50 cases confirmed in labs. In the past it was commonly caught from pigs, but that changed in 2009 when it started spreading rapidly among humans in a major global pandemic.

B / Yamagata – This is known as ‘Japanese flu’. Only people who received the ‘four strain’ vaccine – which is being slowly rolled out after it was introduced for the first time last winter – are protected against the Yamagata strain. Those who received the normal ‘three strain’ vaccine are not protected. This strain has been seen in at least 63 lab cases so far this winter.

B / Victoria – This strain is vaccinated against in the normal ‘three strain’ vaccine, but has hardly appeared so far this winter, with just around four confirmed cases.

Government officials admitted in July that last year’s flu vaccine failed to work for most people. For over-65s – the group most at risk of flu – only 10 per cent of people were protected.

The reason for this was because it was developed in March 2017, before scientists were able to predict what strains of flu would be in circulation eight months later when flu season begins.

A strain known as B Yamagata, which became the most dominant last year, was a surprise for experts, and most of the vaccines offered no protection against it.

Four main types of flu were seen in hospitals last winter, including the ‘Aussie flu’. The H3N2 flu strain caused a major outbreak in Australia in the winter of 2016 and is resistant against vaccination among the elderly.

The severe flu outbreak, in conjunction with high levels of norovirus and cold weather, put extreme pressure on health services and provided the worst conditions some doctors had ever seen in hospital.

Around 55,000 operations were cancelled in January alone in a bid to relieve pressure on the NHS.

More than 15,000 deaths – the great majority of which were elderly people – were recorded in the second week of January.

This was amid a wave of seasonal illnesses, freezing weather conditions, and reports of crisis conditions in hospitals, with one third of the increase in emergency admissions were flu-related.

Experts have warned things aren’t likely to improve in the coming winters.

In March, scientists predicted the next flu pandemic could kill 886,000 people in the UK and infect nearly three quarters of the population.

Government officials have previously warned an outbreak of a mutated influenza strain is on the horizon and poses a bigger threat to humanity than terrorism.

A mutated strain is the most likely contender to wipe out millions, because it can join together with other strains to become deadlier.

This process is what sparked the Swine flu pandemic of 2009 – which killed nearly 300,000 people across the world after striking around 60 countries.

The authors of the report said there are many reasons why countries with milder or varying winter temperatures – including England, Spain and Portugal – have higher excess rates death.

These include people not taking the right precautions against the cold, by not wrapping up warm enough or not having proper insulation in the house.

They add that the temperature’s relationship with mortality during winter is a complex.

The rocketing number of flu cases in the UK and across the world was put down to a surge in four aggressive subtypes that attacked the population simultaneously.

One included the so-called ‘Aussie flu’, a strain of influenza A which triggered triple the number of expected cases in Australia during the country’s winter.

Experts feared the virulent H3N2 strain, which reached the UK, could prove as deadly to humanity as the Hong Kong flu in 1968, which killed one million people.

Another was a strain of influenza B, called Yamagata and dubbed ‘Japanese flu’, which was blamed for the majority of cases during the UK’s winter.

Its rapid spread raised concerns because it was not covered in a vaccine given to the elderly. However, experts claim it was less severe.

Usually, just one subtype, of either influenza A or B, is responsible for the majority of cases. The bug spreads easily in the cold weather.