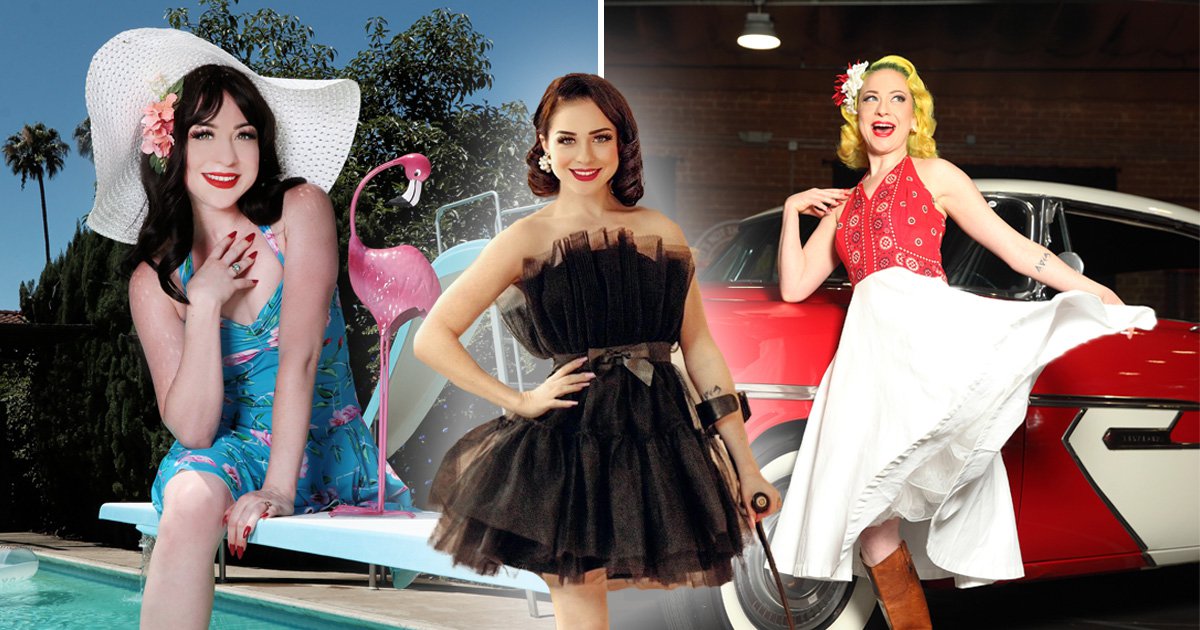 A woman has become a real-life pin up after losing her leg to a rare one-in-10million form of cancer.

She was diagnosed with a rare cancer called Epithelioid Sarcoma in July 2018 when she was just 30 years old.

In December of that year, Cairn had her leg amputated at the hip, which saved her life, and kept her in remission for nearly four years.

After the surgery, Cairn began to learn first-hand that many places in LA aren’t accessible for all bodies and abilities.

‘My new passion in life after amputation was to create a YouTube Channel guiding other hip amputees during the process before, during and after a hip amputation,’ she said.

‘My channel also includes, more recently, honest reviews of different locations and their accessibility, in hopes to inform and make changes and accommodations for all.

‘I recently dove into the pin-up culture scene where I compete in pin-up pageants and have the honour of being on different stages in order to raise awareness for hip amputees, and to encourage others that there is always a positive life to live even during or after grim circumstances.’

Cairn started competing in pin-up pageants in October 2021, and has since been in 14 pageants – coming in first place three times and second place four times.

She recently won third place at her latest pageant where she dressed up as a 1950’s zombie diner waitress.

She’s also been published 12 times in pin-up magazines and made the cover four times.

Cairn says she’s humbled and excited to help raise awareness of limb differences, and to be the first amputee featured in most of these magazines.

She hopes it will encourage others with limb differences and/or disabilities to compete in pageants and apply to be in magazines.

The event’s creator, Tom Ingram, also gave her the opportunity to hold a group meeting called ‘Rockabilities’ where anyone who has had any medical/health issues can meet and connect with others.

Eventually, Cairn wants to turn the group into a non-profit organisation where she can help people with difficulties like medical costs, rides, and resources.

But unfortunately, Cairn has found herself dealing with a recurrence of her cancer as, earlier this year, she started feeling some new pain and discomfort.

Cairn went to her oncologist, and they confirmed that the cancer was back, and this time there were three tumours instead of one large one.

Her doctor has said the next step is chemotherapy, which was not a treatment option for her years ago. Now, there is more hope that chemo will fend off the disease once and for all.

Cairn used one of her most recent for her GoFundMe, which has been set up to aid with the cost of her treatment.

‘I am trying to make it to the silver screen, become a professional model, and an aerial straps performer,’ she said.

‘Although these aspirations have unfortunately had to take a back seat because of the cancer returning.’

Cairn is understandably worried about the future, but she’s keeping hope very much alive.

‘For the first time I will have chemotherapy that will be continuous for six months,’ she said.

‘I am very upset and concerned because the type of cancer I have is very rare and hard to treat, and chemotherapy is my only hope.

‘I have a GoFundMe to help me and my husband through this challenging time.

‘The money we receive will go towards what insurance won’t cover such as procedures and medicine. Travel expenses, caregivers, food, house cleaning services, sanitising items, radiation cream, head scarves to keep me warm, and bills.

‘I had to quit my most recent job and my husband Joseph will need to take time off to help support and be a part of this journey with me.’

Tragically Cairn’s husband has health issue of his own.

She explained: ‘Joseph recently went on dialysis because he has an autoimmune disease that attacks his kidneys and causes him to have high blood pressure.

‘We’ve been paying for the machine and supplies that he needs to stay alive until he can receive a matching kidney.

‘Our medical issues have not created anything but a deeper love between us, we will be celebrating our fifth year of marriage at the end of October.

‘I remain enthusiastic and positive and once I am healthy enough after treatment, I plan to go skydiving to celebrate.’

Get in touch by emailing [email protected]